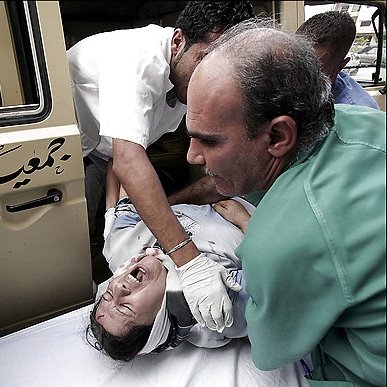 A woman is taken by ambulance to a hospital in Tyre, southern Lebanon, after she was injured when an Israeli missile struck her house.

TYRE, Lebanon, July 19 -- Soon after dawn Wednesday, Ibrahim Khalil Heidar readied his green Mercedes. His wife, son and daughter-in-law climbed in, carrying no more than would fit in the trunk. Their neighbors, among them eight women and four children, piled into two other cars, a white and a blue Mercedes. On the roof of each vehicle, they carefully tied a white sheet that rippled in the morning breeze. A universal message, it was their plea for protection.

They then left their small border town of Aitaroun, already barraged by Israeli airstrikes, and made for Tyre, and safety. But little around them was safe. A bomb-hewn crater blocked one road. A detour brought them to another crater. "Around and around" they drove, Heidar recalled, before they reached a narrow, buckling road an hour later that ran along a grove of ripening lemons bordered by stately pines.

"We didn't hear anything until the missiles struck us," the 75-year-old Heidar said. "One, two, three -- I have no idea." From his hospital bed in Tyre, he shook his head at a memory just a few hours old."God help us," he said.

In more than a week of Israeli airstrikes, his home of southern Lebanon has shattered like a china plate. Among its shards are the broken lives of tens of thousands of people fleeing villages such as Aitaroun, and tens of thousands more stranded in Tyre, a besieged city spread out along the Mediterranean Sea where aid and hospital officials say a humanitarian disaster is unfolding.

Red Cross officials here said scores of people were killed in attacks across the south on Tuesday. With roads under threat of attack, they said, the office's five ambulances couldn't reach villages, leaving victims buried under the rubble. Braving the shelling that residents describe as random, cars flew white flags from antennas, rolled-up windows, sunroofs or hand-held flagpoles.

Civil defense workers, too scared to venture out in firetrucks, had to leave a rotting corpse in a humid sun along one road. His bloodied head was propped against the window of his car, struck on Tuesday. Clothes spilled out of torn suitcases in the trunk; on the ground lay pink and blue baby shirts.

Tyre, a city of 60,000 before the war, 12 miles north of the Israeli border, is paralyzed by fear and dread. Hundreds of people have fled to the Tyre Rest House, a beachfront hotel, hoping for an evacuation. The city itself is deserted: No shop is open; few cars ply the streets, which are strewn here and there with rubble. In a traffic circle, a horse lazily grazed on grass, as a lonesome car alarm pierced the afternoon sky, drowned out every so often by the trail of Israeli jets and the thud of bombing. "It's not the end. This is only the beginning," said Katya Taleb, who got married last month. "It's the beginning of the end."

The road into Tyre hugs a coast under blockade by the Israeli navy. A scarred landscape unfurls. Virtually every bridge is destroyed. A white Mercedes, its windows shattered, is perched along one; several cars are abandoned near a cemetery. Bombs have etched craters along the highway, spraying the asphalt like buckshot. Livestock sits untended in a corral; watermelons and tomatoes rot at fruit stands.

"Here we must drive quickly," said Daee Mansour, a 31-year-old hired driver with a long beard, barreling along a stretch of road exposed to the Israeli warships at sea.A green medallion hung from his rearview mirror. "Mohammed," it read. "God loves me, and I love God," said Mansour, a father of two. Then he turned more serious: "I have young. They have to eat. I don't like it, but if I don't work, they don't live."

Oncoming cars, speeding at 80, maybe 90 mph, flashed their headlights as a warning. In the distance, smoke rose from the road after it was struck by a shell. Cars screeched into a U-turn, then sped off in the other direction. At times, drivers flagged other drivers. "What's the best way to Beirut?" one shouted. Another, stranded, yelled: "Please help me! Please! I need a mechanic." Along a dirt road crossing the Hasbaya River, a car had collided with a telephone pole. "You have to have tough nerves so this doesn't happen," Mansour said."Scary," he then kept repeating under his breath. "Scary.
"
A crater sits at the entrance to Tyre, mounds of asphalt and dirt gathered beneath apartment buildings with shattered windows. Awnings hang in the geometry of destruction. Every so often, a group of mainly young men sits inside the entrance of an apartment building. Otherwise, the streets are given over to stray dogs. On one stood Mohammed Rahhal, a 25-year-old laborer."We're catching the worst of it -- day and night, night and day," he said. Crusted blood was still on Rahhal's ear, a wound he'd suffered a day before when an Israeli air raid targeted a building next to his masonry workshop. "The Israelis want to empty the south so that they can destroy it," he said.

"We want to leave, but there's no way out," said Sabina Hijazi, with her four children between the ages of 2 and 13. She started crying, and her words poured out. The bombing terrified her children; occasionally, it shook her house. No banks are open, so she can get no money. Nor are the shops, so no food. Her son is sick, but she's too scared to venture out to the hospital. "What can I do?" Hijazi asked. "How can I get my children out of here? If we can't leave, we're left facing death."

Hospital officials estimated that perhaps 12,000 people have already left the city, maybe more. About 15,000 poured in before the roads became too dangerous. Ali Mroue, 15, said his family had spent most of the time since then in the basement, with 75 others. During the fiercest barrages, the children cried, and parents recited verses of the Koran or read to themselves quietly.

Across the city, families are relying on what they had stocked before the fighting began -- bread, beans, milk, sugar, cheese and lunchmeat. Electricity was cut on the second day, spoiling some of the food, and water followed. The sick are running short of medicine. In attacks that have left residents bewildered, a private school was bombed, as was the civil defense headquarters and fire station. "It's hell," said Taleb, the newlywed. "The attacks are absolutely random," said her husband, Ali. "They don't discriminate...

Next to Taleb was Martha Dubois, the French principal of the private school that was bombed. One of her students, 14-year-old Saraya Baydoun, walked by, her face cut when a bomb hurled debris near her house. Dubois had not seen her in days. "Sweetheart, you're okay!" she said, hugging her.

At the small Red Cross office, its five ambulances parked outside, frustration reigned as many of its 50 volunteers sat idly. On this day, they were especially upset about the events in the nearby village of Srifa, where the office's director, Sami Yazbak, said bombing had collapsed 20 houses and buildings. One ambulance had made the perilous trek, and its crew estimated that between 60 and 80 people were still buried there.

"We're not sure if they're dead or alive," Yazbak said. "No one can get there and take them out from under the rubble. It's not just Srifa. It's all the villages. Sometimes people are still alive, but there's no way to get to them. You just can't help them." He looked over a map, roads to the largest villages highlighted in black. "Every day is getting worse than the day before," he said.

One volunteer, Qassem Shallan, said he had taken a call from an elderly couple in the village of Byut al-Sayyid. They pleaded for the Red Cross to pick them up, to bring them water, to deliver medication for the woman's high blood pressure. "I started crying," he said. "There's no way to get there. I don't know if she's still alive." At Najm Hospital, doctors who had been working eight days straight said they were running low on antibiotics, gasoline for the generator, oxygen, suture, cotton and gauze...

Ali Najm, a 35-year-old radiologist, beckoned a visitor into a small room. "Here, I want to show you something," he said. Najm knocked, then gingerly opened the door. Inside was his wife, 8-year-old son and 11-year-old daughter, along with his sister-in-law and her three children, all of whom have been sharing a cramped room for a week now, deeming the hospital safer...

A few rooms down was Heidar, the patriarch of the family whose cars were attacked coming from Aitaroun on Wednesday. On the road into Tyre, he had followed 100 yards behind the two other cars. The missiles struck those cars, and the survivors crawled out, clambering into the lemon grove. Seeing the blast, Heidar and his family followed them, abandoning their Mercedes. "The bombing came right on top of us," he said.

A blast severed his left pinkie finger, cut his back and broke his foot. He crawled over to his daughter-in-law, Insaf, who was also wounded. His 71-year-old wife, Leila, was stranded farther away. Less than a minute later, there was another explosion. His wife was so dismembered that the hospital had no corpse to bring to the morgue. Three others in the group died, including 31-year-old Ghassan Faqih, whose 3-year-old daughter, Narjis, lay in another bed, staring at the ceiling. Her face was peppered with blood. "You see, my family." Heidar couldn't go on. His pale blue eyes watered, and he swiped away dirt still in his gray hair from the Israelis' attack.

The Israeli military's chief of staff Dan Halutz said that Israeli "operations are centering on south Lebanon. Among other things, the army is trying to cleanse the border zone of Hezbollah outposts and attack the villages from which Hezbollah is firing. When the IDF discovers that Hezbollah is firing rockets at Israel from a particular village, Halutz said, the army warns the residents to leave the village and then bombs it..." Haaretz, July 20, 2006 http://www.haaretz.com/hasen/spages/740251.html

Lebanon's Prime Minister Fouad Siniora called for an immediate cease-fire with Israel on Wednesday...In the first casualty figure officially announced by the government Siniora said that 300 people have been killed, 1,000 wounded and half a million displaced in Israel's operation. In a swipe at the international community, particularly the United States, which said Israel was acting in self-defense, Fouad Siniora said, "Is this what the international community calls the right of self-defense? Is this the price to pay?" Siniora added he would seek compensation from Israel for the "unimaginable losses" to the nation's infrastructure. Speaking to a gathering of foreign ambassadors, Siniora made an urgent appeal for end to hostilities on a humanitarian basis. "We will spare no avenue to make Israel compensate" for the destruction inflicted on the country, he told the gathering, which included the U.S. ambassador. Haaretz, July 20 2006 http://www.haaretz.com/hasen/spages/740364.html