The Debate over Hate Speech

If Nothing is True, Then Everything is Permitted: Occult Eschatology in Our Time

If Nothing is True, Then Everything is Permitted

Occult Eschatology in Our Time

This is the title of our latest column on Substack, the new home of "On the Contrary"

Access this important, challenging information free of charge at this link:

Best wishes in the Battle to "Provide Theseus with the String”

Email ThisBlogThis!Share to TwitterShare to FacebookShare to Pinterest
Labels: Michael Hoffman's Revelation of the Method

What are the odds that in California within 72 hours, two elderly Asian men, age 72 and 66, would kill 18 people within a 380 mile radius?

One in a million?  We don’t believe in coincidences.  Is this “gun violence” or Cryptocracy violence?

On the Contrary is migrating to Substack.

Read our “Bad Half-Moon Rising" column online at Substack, or subscribe free of charge and have our columns delivered straight to your e-mail in-box!

The details are at the link below. It’s easy and hassle free. We’d love to have you join us in our new online home:

Thank you for reading our "On the Contrary Blog" and thanks to Blogger for hosting us these many years.

We are now writing for Substack and most (though not all) of our future columns will appear there.

You can easily subscribe free of charge and receive our columns by e-mail, or if you prefer, remind yourself to check our Substack page weekly to see what may have been most recently posted. The columns are free of charge, but you are invited to support our work with a monthly donation (Substack makes it easy and secure).

Best wishes in the battle for the Advancement of Knowledge contra Cancel Culture,

After Christmas, The Day of the Martyr

After Christmas, The Day of the Martyr

In the Catholic Church December 26 is the day appointed to commemorate the life and death of St. Stephen, the First Martyr. Why is this observance so close to Christmas? To remind us of the price Jesus would have to pay and that His true followers may be called upon to suffer, due to their fidelity to His world-shaking gospel.

Stephen (martyred circa 35 A.D.), was stoned to death by the Pharisees for preaching that Jesus was the Messiah, and haranguing them as stiff-necked and uncircumcised in heart and ears (Acts 7:51)

Certainly Christians who sound the alarm about the Pharisee ideology contained in their holiest books of hate speech, the Talmud of Babylon, pay a price for doing so, not the least of which are ostracism, boycott and calumny—and sometimes bankruptcy and even death.

In 1700 Johann Andreas Eisenmenger, a learned Lutheran professor of Hebrew and Aramaic at the University of Heidelberg, suffered all for the truth after he published his peerless, two volume, 2,000-page study, Entdecktes Judenthum, having been driven to a premature death by the seizure of the first edition (2,000 copies) of his life’s work, a book suppressed by order of the Holy Roman Emperor, who caved to the demands of financier Samuel Oppenheimer, and Rabbi Samuel Wertheimer, Hoffactor (confidant and administrator) to the Catholic Emperor, the Austrian Leopold I.

Jew-haters and Neo-Nazis blame “The Jews” for this.

Why blame certain people for being loyal to the Talmudic injunctions to eliminate the books of the Christians?

Absolved for destroying Eisenmenger’s magisterial, monumental volumes, is the traitor Leopold, “the poor schmuck who through no real fault of his own was strong-armed by the supernaturally powerful Jews.”

That’s the pitiful mythical story line believed by weaklings and  planted by the foes of truth to forever shift the onus of culpability off of Christian/“Aryan” Judas goats and onto soldiers of an enemy army, who are loyal to their duty as they were taught.

This psychological warfare stratagem continues into the present — the notion that it is “The Jews” who are the cosmic fount of evil and not the cowards, betrayers and backstabbers among our own kind without whom the Talmudists and Zionists could not have approached first base in the conquest of “Kochi ve’otzem yadi of Edom” (literally, “the strength of Edom”—the clandestine pejorative Talmudic term for Western Civilization).

The story of the suppression of Prof. Eisenmenger's Entdecktes Judenthum is recounted in our recorded talk, “Eisenmenger and his Banned Book” available on CD (e-mail rarebooks14ATmac.com [substitute @ for AT])—for a price and a shipping rate depending on which country you reside, and we will invoice you. If you have the ability to read German you can also request to order Entdecktes Judenthum in pdf. files on a text CD).

While many Catholics have been heroes in the witness they have borne to the Truth, the pusillanimity of the turncoat Holy Roman Emperor has been repeated over the past 300 years countless times. We have witnessed it among Catholic priests who administer “Traditional” and “Conservative” chapel bookstores, and Protestant ministers who have the same authority. In the whole of the United States of America the only minister of the gospel who has had the testicular fortitude to consistently sell our study of Judaism is Pastor Chuck Baldwin of Montana.

When the Fathers of the ancient true Church of Jesus Christ marked the day after Christmas as Saint Stephen’s Day they were warning us to pause and solemnly reflect in the midst of our revelry (December 25 is the start of the twelve days of Christmas, not the end of the season)—upon the fact that The Way of Jesus may require of those who write, speak and teach His Truth unswervingly, that which was required of Stephen.

Michael Hoffman is the author of the banned textbook Judaism Discovered (1,102 pages) intended for specialists; and Judaism’s Strange Gods (381 pages), a condensation for the general public.

This festive Christmas time, when the followers of Jesus celebrate His Blessed Mother’s assent to the angel Gabriel to be the Mother of God (Theotokos), it is of vital importance to bring to the attention of the public what the Babylonian Talmud actually teaches about Our Savior and His Mother.

The airwaves and newsprint these days are filled with slogans such as “Fight Hate,” with the supposition being that the haters are the gentiles.

Lost in the deluge of propaganda are the premiere books of hate which happen to be the holiest volumes of the renascent creed of the ancient Pharisees (held to be far superior to the Old Testament) — the Talmud of Babylon.

In the midst of this barrage is the rising notion that Pharisaic Talmudism is an ally of western civilization. This preposterous claim is pushed by Ben Shapiro, Dennis Prager, Yoram Hazony, Rabbi Meir Soloveichik and hundreds of other “Conservative leaders," as well as Fox News and in the pages of the Wall Street Journal, National Review and many other leading Right-wing outlets.

These myths exist mainly because our two books Judaism Discovered and Judaism’s Strange Gods have not been sufficiently distributed, reviewed and publicized, otherwise the myths would be impossible for our people to believe.

Talmudism holds western civilization in utter contempt. It ritually curses Christians and Christian society. Among the Ashkenazim, the most influential law giver is Rabbi Moses Maimonides who despised Our Lord and prayed that with regard to Jesus Christ, “May the name of the wicked rot!”

Maimonides advocated that Christian houses of worship, under the right conditions, should be destroyed. Based on his halacha, when Notre Dame cathedral burned in 2019 there was much gloating and jubilation among the Orthodox Israeli rabbinate.

Conservative America is being taken down a primrose path that looks civilization-affirming but underneath it represents the triumph of the ideology of the ancient Pharisees, which Jesus stated was “of hell” (Matthew 23:15). Church-goers mouth His name but reject His solemn words and warnings.

This festive Christmas time when the followers of Jesus celebrate His Blessed Mother’s assent to the angel Gabriel to be the Mother of God (“Theotokos"), it is of vital importance to  bring to the attention of the public what the Babylonian Talmud actually teaches about Our Savior and His Mother. 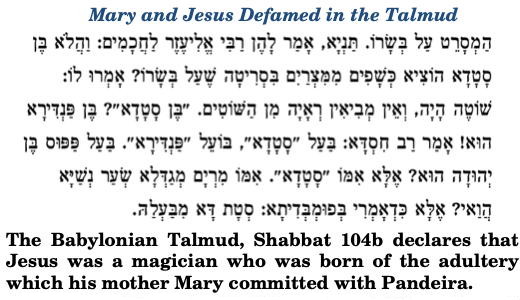 Circa A.D. 175 Celsus disseminated this false witness for which he was rebuked by the Church Father Origen (cf. Contra Celsus, I:28 www.bluffton.edu/courses/humanities/1/celsus.htm). This despicable libel continues to be taught by those who hate Jesus and Mary. 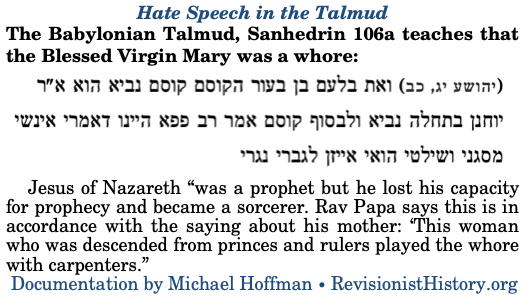 Note: we love and seek to to do good for all deluded people, whether Judean or gentile, who are deceived about the nature of the Talmud of Babylon.

Our cause is the cause of every authentic follower of Jesus, in defense of His Holy Name and the honor of His Mother. May God abundantly bless all who take up this holy campaign and make it their own.

The anniversary of the voluntary Incarnation of the Son of God on earth, fixed at a date in late December (though no one knows precisely in what month it occurred), was the beginning of the end of Satan’s kingdom. It resulted in the Resurrection victory of Jesus Christ over death itself. The power over the cosmic force of death renders the one who possesses it the King of the Universe. The Kingship of Christ exists whether we recognize it or not. Our salvation however, depends upon our individual recognition of that singular truth.

Let us recall in Matthew 19:4-5 that King Jesus defined marriage as between a man and a woman. Anyone who declares (much less legislates) otherwise, is not of Jesus. The famous riposte, “But these men ‘luhv' each other!” fails on every level. The love delusion is the gateway to the further alchemical processing of humanity, as we observed in our recent Twilight Language podcast. For, if love is what justifies a man having sex with a man and the Congress of the United States terming it marriage, then with that same rationale a man who “luhvs" his sister or his mother will eventually be permitted to legally have incestuous sex with them, and some time after that sex with children, and as the final act in the Rosicrucian crucible of Alchemical Process —sex with one’s bulldog or cow — after all, the pair “luhv” each other, and “Love Wins!"

The further America departs from Biblical standards the further we will not only decline, but descend. Virgil observed in the Aeneid, Facilis descensus averno ("The descent into hell is easy”). Indeed it is.

The Herod-like assembly-line massacre of the innocents — the abortion of unborn human beings — initiated the incremental conditioning process in America in 1974, by hardening the collective heart of our people. That has gradually led to the contemporary apathy concerning the “marriage” of homosexuals, and we say this with compassion and charity for those afflicted by same sex attraction. Like those who are afflicted with temptations toward other mortal sins such as incest and pederasty, it is their lot in life to resist forbidden sexual relations through the almighty grace of Jesus. Upon these truths, western civilization was founded, beginning with the reign of the babe in the manger.

(substitute @ for AT in the preceding address)