It doesn't get any more explosive than this 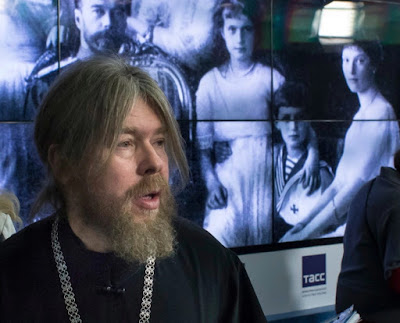 Authorities will investigate an anti-semitic theory that the 1918 killing of Tsar Nicholas II was a “ritual murder” following comments by a bishop close to Vladimir Putin. Bishop Tikhon Shevkunov, who is heading a Russian Orthodox Church commission investigating the execution of the Romanov family by firing squad in Yekaterinburg, said at a conference on Monday, November 27, that many members of the commission believe it was a ritual murder that held special significance for Bolshevik commander Yakov Yurovsky and his men.

“Ritual murder” has in the past referred to a theory that the last emperor was the victim of a Jewish conspiracy, as Mr Yurovsky was of Jewish heritage.

Russia’s investigative committee said it would look into the claim by Mr Shevkunov, who is reputed to be Mr Putin’s confessor. The announcement drew an outcry from Jewish groups. Rabbi Boruch Gorin, a spokesman for the federation of Jewish communities, told Interfax news agency that this ritual murder investigation was a “shocking” example of “medieval ignorance,” noting that the myth of Jews ritually killing people to extract their blood for matzo bread has figured in anti-semitic propaganda for many decades.

The controversy comes as Mr Putin for the first time took part in the church’s annual bishops council on Nov. 29. Speaking at the conference, Patriarch Kirill said he had “hard questions” about the Tsarist murder investigation, which they re-opened in 2015, and called on the authorities not to rush it. Yekaterinburg news agency Ura.ru quoted a source close to the church leadership as saying the patriarch feared that the ritual murder allegations could “provoke uncontrollable outbursts of ultranationalism”.

Patriarch Kirill also said the Russian Orthodox Church had not yet taken a position on the continued analysis of the Romanov family’s remains. Despite DNA testing showing their identity, the church has recognised neither the remains of Nicholas, Alexandra and three children interred in St Petersburg cathedral in 1998 nor the remains of his two other children found in 2007.

Church officials have said they need to be extra sure of the remains’ provenance since Nicholas II, who was a cousin of King George V, his wife Alexandra, who was a granddaughter of Queen Victoria, and their children were canonised in 2000. Forensic medical expert Dr Viktor Zvyagin told the conference that the remains discovered in 2007 were those of a boy aged 12-14 and a young woman aged 18-19, which would match the ages of Nicholas’ heir Alexei and his daughter Maria. He said he believed that further remains of the two are located nearby.

Peter Sarandinaki, the US-based descendant of a loyalist general who took Yekaterinburg days after the tsar was killed, said DNA testing he organized of the 2007 remains proved conclusively they were those of Alexei and Maria, but was skeptical more would be found. “The grave of the two children was shallow. It could be that animals might have carried them away but I do believe that most of the bones were destroyed by fire” set by the Bolsheviks, he told The Telegraph.

From the Daily Mail (UK): “Yakov Yurovsky, the organizer of the execution who was Jewish...” The country’s final emperor was shot with his wife and five children in 1918. Some in Russian Orthodox Church insist he was murdered in a Jewish ritual. Theory was dismissed in 1990s but new investigation will explore it again. Jews have been accused of ritual murder by anti-Semites since Middle Ages.

Do you buy it?

Human beings ought to be able to freely and fairly investigate and research the murder of Christians by the followers of the Babylonian Talmud. The thought police in the press should stop stigmatizing research and investigation as “hate” or “bigotry." I’ve got a bulletin for the media: truth is not “anti-Semitic.” The media are dismissing the possibility that the murder of the Tsar and his family was a ritual killing, by terming any investigation of Judaic ritual murder as part of “the blood libel myth.”

Some of the accusations of Judaic ritual murder in the past were indeed mythical and malicious, but not all. For instance, before he was compelled to recant, Israeli Prof. Ariel Toaff (the son of the chief rabbi of Rome), wrote a history book in Italian upholding the veracity of such murders in certain cases. Toaff’s book was translated into English by selfless revisionist scholars. Their faithful translation is based on Toaff’s uncensored first edition. Prof. Toaff’s suppressed book, Blood Passover, is now online, free of charge (it’s a big pdf. file and loads slowly): https://bloodpassover.com/xbp.pdf Blood Passover is of world-historic importance. It is a gift to humanity and the struggle for human rights in defense against religious-based rackets and mind control.

The commissars of information have also neglected to report that the building where the Tsar and his family were slaughtered — by shechita or otherwise — was left standing for decades, until the USSR fell. It was under Boris Yeltsin, the U.S.-approved strongman, that the site was razed, in the hope that with no Christian pilgrimage site standing, the memory of the people would fade. But this has not proved to be the case.

Send a donation to keep Michael Hoffman’s information coming. Give back for that which you have received.  Or purchase a revisionist history book or newsletter.
_______________

More of the forgotten history of white slaves: a Thanksgiving remembrance

Another Chapter in the Forgotten History of the Enslavement of Whites

One chapter in the history of the white slaves of Britain who were shipped to America, is found in the annals of 17th century England. After the Duke of Monmouth’s unsuccessful 1685 rebellion against Catholic King James II, thousands of captured  rebels who were not tortured to death or hanged were sold as Protestant slaves to the New World for £10 to £15 each. They were slaves, not “indentured servants.”

The enslavement of whites in the western hemisphere (and later in Australia), is concealed by dishonest or lazy "historians" under euphemisms such as "convict" or "servant." Monmouth's men were neither. In most cases these captive Protestants endured chattel slavery unto death in the West Indies and colonial America.

The sale of these white slaves was instigated by the infamous tyrant, Lord Justice George Jeffreys, who presided over the "Bloody Assizes," trials during which he pardoned wealthy rebels (such as Edmund Prideaux), in return for astronomical bribes costing hundreds of thousands of pounds (in today's money). He offered others for sale as slaves.

Slaves have been made of every race since the dawn of history. No race and few nations are innocent when it comes to the history of enslavement. Media propaganda singling out white people as the most vicious, or the principal perpetrators, is a type of mental genocide intended to instill self-loathing in whites.

The fallacy that whites were not slaves in any noteworthy operation of enslavement is particularly perverse in light of the fact that the very word slave is derived from the name of the East European white person (Slav). The Slavs endured repeated enslavement in the Middle Ages.

As a politically correct, cartoon version of the First Thanksgiving in Plymouth, Massachusetts gains currency in November, with the Native Americans as saints and the Pilgrims as devils, it is worth recalling that among history's most relentless and cruel enslavers were the Native Indians of America and Mexico, who, like the British aristocracy, had little mercy on their own kind.

The enslavement of American Indians by American Indians was the engine of transformation of the Great Plains, before any white civilization was a significant force there. The Commanche, for example, eradicated whole Apache villages. Those Apache they did not kill in the course of their eradication, they enslaved. The major Commanche-operated slave market was  located in what is now New Mexico. Horses, buffalo hides and slaves were the main source of Commanche revenue. The kingdom that this Native American slave power built extended from Arkansas south to Mexico.

We learn little of this history because it undercuts the Hate Whitey and Blame Whitey racism entrenched in America's schools and news media. The pity of it is that the foremost fomenters of anti-white racism are themselves whites who regard the expression of gratitude toward the Pilgrim founders of America as a species of despicable perversity.

Michael Hoffman is the editor of Revisionist History® newsletter, and the author of They Were White and They Were Slaves: The Untold History of the Enslavement of Whites in Early America.
___________