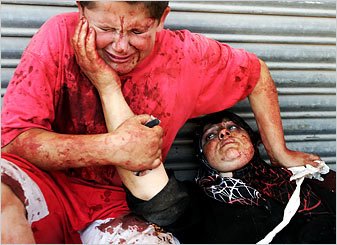 Ali Shaito pleaded with his mother Muntaha to stay conscious as she lay near death from shrapnel wounds in Lebanon after their family's van was struck by an Israeli missile. 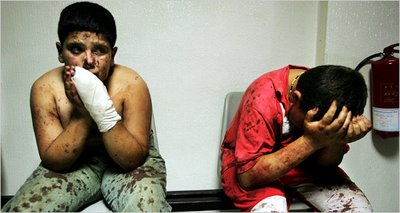 Two brothers from the Shaito family, Abbas and Ali, waited Sunday at a hospital in Tyre, Lebanon. Three of their relatives died while fleeing north when their van was struck by an Israeli missile. 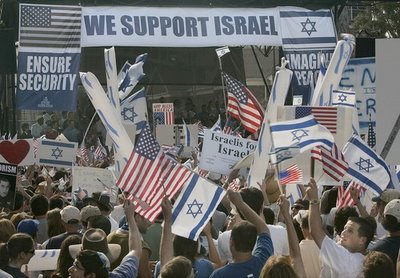 Thousands show support for Israeli military operations in Lebanon in a July 23 rally in Los Angeles. Gov. Arnold Schwarzeneger and L.A. Mayor Antonio Villaraigosa both spoke at the event and lent their enthusiastic support.

SIDIQEEN, Lebanon, July 23 — Muntaha Shaito’s eyes rolled back as the paramedics screamed at her to stay awake and implored her son Ali to keep her engaged, as she teetered near death from shrapnel wounds inflicted by an Israeli rocket. “Pray to God!,” one paramedic shouted at her as she writhed in Ali’s arms.

It was the scene that members of the extended Shaito family said they had feared most, the real reason they had held out for days in their village of Tireh in southern Lebanon, terrified of the Israeli bombardment, but more terrified of what might happen if they risked leaving. On Sunday they gave up their stand, and all 18 members crammed into the family’s white Mazda minivan. They planned to head north toward the relative safety of Beirut.

Within minutes they became casualties of Israel’s 12-day-old bombardment of southern Lebanon, which the Israelis say they will continue indefinitely.... By the Lebanese official count, Israel’s attacks have killed more than 380 Lebanese.

An Israeli rocket, which Lebanese witnesses said was apparently fired from a helicopter, slammed straight into the center of the Shaitos’ van as it sped round a bend a few miles west of their village, and the van crashed into a pole. Three occupants were killed: an uncle, Mohammad; the grandmother, Nazira; and a Syrian man who had guarded their home. The missile also critically wounded Mrs. Shaito and her sister. Eleven others suffered less severe wounds.

“They said leave, and that’s what we did,” said Musbah Shaito, another family uncle, as his niece, Heba, 16, cried hysterically behind him for her dead father, whose head was nearly blown off. This reporter watched as paramedics struggled to remove the dead from the van, but soon gave up, as an Israeli drone hovered overhead.

“This is what we got for listening to them,” Mr. Shaito said, speaking of the Israelis.

Other family members and Red Cross paramedics at the scene said the Shaitos were farmers from a region known for its tobacco and olive crops....

Bombing victims, witnesses and officials interviewed in the area Sunday said Israeli warplanes hit people escaping by vehicle from their villages at least six times in a day of fierce bombardments. Lebanese Red Cross ambulance drivers complained about narrowly avoiding Israeli fire themselves as they cleared out the wounded, and a Lebanese freelance photographer, Layal Najib, 23, was killed when an Israeli missile struck near her car, near the scene of the Shaito family bombing.

...A drive through the southern villages Sunday morning was like a tour through a string of ghost towns, with most residents having cleared out or holed up in their homes, as Israeli aircraft continued their bombardment. Roads were bombed, making passage difficult or impossible, and fields were scorched as the hulks of bombed cars littered the roads. All but a few stores were shut, with glass and rubble littering the streets.

There were only about 52 people left in Tireh when more than half of them left for Beirut on Saturday, leaving the Shaitos largely to fend for themselves. Without much food or water, the family gave up their stand early Sunday.

They included Muntaha Shaito and her boys, Ali, 13, and Abbas, 12; her brother in-law Mohammad and his two daughters, Heba, 14, and Kawther, 17; and several other relatives.

They packed into their van, with all their money and valuables, and raced toward Tyre, the big southern seaport about 15 miles west.

It proved a day of carnage for the Zabad and Suroor family, too, said family members and medical staff members who treated them.

The Zabad family and their relatives, the Suroors...Just minutes before Red Cross ambulances carted away the Shaito family, the Suroor family barreled down the road headed toward Tyre, with the Zabad family right behind.

When the Zabads spotted a wounded man on the road, they stopped and picked him up in their Nissan sport utility vehicle. They stopped again to pick up two men who had been attacked on a motorcycle and got even farther behind the Suroors.

As soon as the Zabads saw the car hit, they sped past, hoping to get to the Najm Hospital, less than a mile away. But a minute later a missile struck near them, setting the car on fire, and throwing much of the family out of the car.

The scene was chaotic at Najm hospital, on the outskirts of Tyre, which has been flooded with wounded from the bombing campaign. Doctors rushed to X-ray several of the victims, checking for shrapnel, as others where treated for their burns and injuries. For a short while, the hospital nurses rubbed cream on an 8-month-old baby for burns until they found her mother, Mrs. Suroor.

Despite the severe burns on his face, Mahmoud Suroor turned to his mother while in the emergency room and asked where his father was. She did not respond. Then he turned again to his mother. “Don’t cry Momma, we’ll all be O.K.,” he said.

Asked about the attacks on civilian vehicles, an Israeli Army spokesman said the military had hit “approximately 20 vehicles suspected of serving the terror organization in the launching of missiles at Israel, and were recognized fleeing from or staying at missile-launching areas.”

Brig. Gen. Shuki Shachar, the chief of staff of the Northern Command of the Israeli Army, said...the Lebanese civilian death toll was light, considering that Israeli fighter aircraft and attack helicopters had made 1,500 sorties over Lebanon and that Israel had fired more than 20,000 artillery rounds into the country in the last 12 days.

I wonder if there are any people out there who were pro-Israel before these atrocious photos of the pain inflicted upon the people of Lebanon became public; if they are changing their minds as far as where their positions on these issues of unrelenting bombing of civilians, (i.e. terrorism).
A picture is worth a thousand words and in this case a picture could be worth a thousand minds changing their attitudes towards the Israeli state.

The picture of the rally in L.A. of Americans supporting the Iraeli terrorism in Lebanon is astonishing and disgusting when you see the pictures of the innocent children who represent only several of thousands injured for no good reason. Israel has offered no good reason for invading and destroying the Lebanese airport.
The 50 pentagrams and the hexagram present on the U.S. and Israeli flags, all occult symbols of magic, overtly testify to the extent they have control over the Group Mind. Whether you believe in magic or not, some if not the majority of U.S./Israeli leaders do and as Mr. Hoffman has written in the past, that is why it is important to study and learn about these occult/magical/kabbalistic symbols so you will be able to notice them and become a "self-initiate" rather than joining their ranks.

Sorry if I did not get what you wrote across clearly, Mr. Hoffman

Sincerely,
"Living as free as I can in the Lone Pentagram State"

I asked my sister about her thoughts about what is currently happening in Lebanon and she replied, "It's like history repeating itself again."

Hopefully there will be consequences this time for the ones who perpetrated this catastrophic, unnecessary violence and terrorism. I don't think I need to name those of whom are responsible for this atrocity. God will punish those responsible. It may not be now but in future generations, I believe those responsible will suffer their ancestor's sins.