Israelis Approve of Holocaust in Lebanon 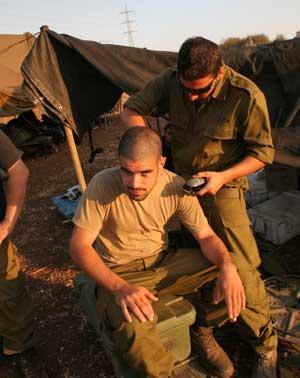 Israel army Sergeant Rafael Ezra has little sympathy for Lebanese civilians killed by Israeli attacks. "I think they need to choose better where they live," he said.


NEAR THE ISRAEL-LEBANON BORDER - Rafael Ezra's artillery is pounding unseen targets miles away with blast after deafening blast. But the 21-year-old Israeli soldier isn't too concerned about whether the shells are killing Hezbollah fighters or innocent civilians. "Most of the people killed in Lebanon lived in Hezbollah neighborhoods," Ezra said while getting his hair shaved and listening to Arabic music as shells soared over a nearby hillside. "So I think they need to choose better where they live. People should know better."

Few Israelis, however, are shedding many tears for the civilians dying in Lebanon or wondering whether their country's tactics might make it harder rather than easier to reach a peace that would last longer than a few weeks or months.

The latest conflict with Hezbollah has united Israel...public support for the military action remains above 80 percent...three-quarters of Israelis in one recent poll urged their country to go further.

"I am prepared to hail down hellfire...their innocent bystanders can die instead of ours," Rafi Ginat, the editor of Yedioth Ahronoth, Israel's largest newspaper, wrote in Friday's edition. "We are in the middle of a war...We have to strike hard - and we can allow ourselves to feel good about it."

Earlier this week, an Israeli airstrike hit a United Nations base, killing four unarmed peacekeepers. Eight Canadian citizens were killed last week as they tried to escape the attacks. Dozens of Lebanese citizens have been killed when Israeli planes hit convoys of civilians heeding Israeli warnings for them to leave their homes.

Israeli officials generally say they're sorry after such attacks. But their statements usually come with a "but"...Israeli Prime Minister Ehud Olmert...recently complained that the world was getting a "distorted picture in which the victim is portrayed as the aggressor."