"Israel is going to kill us" 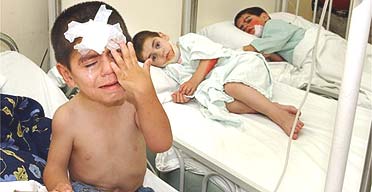 Brothers Nabil Alaa al-Din, (from left), Ramzi and Ali, hospitalized after an Israeli bombing in the southern village of Srifa, Lebanon, where at least 12 died. The mayor of Sifra told al-Arabiya a "massacre" had taken place. "There are dozens dead and massive destruction," he said. "Emergency services are putting out fires, they cannot reach the houses to recover bodies."

***
...Lebanese officials said Israeli bombs hit the nation's largest milk factories, a major food factory and an eagerly awaited aid convoy that was making its way toward Beirut from the United Arab Emirates.

"It's a very serious escalation," Social Affairs Minister Nayla Mouawad said. "We were putting a lot of hope on the milk factories, to get milk for children and elderly people."

An Israeli military spokesman denied targeting the factories and aid trucks. Only Hezbollah facilities and vehicles believed to be transporting weapons were struck, he said.

...Despite good intentions, aid organizations have been floundering in their efforts to deliver help. The bombing has been too heavy, the crisis too sudden, the infrastructure too broken.

...Aniya Salman, 34...and her five children spent the first nights of the bombardment sleeping in an alleyway alongside their apartment house in a southern suburb of Beirut; it was the closest thing they had to a bomb shelter.

"My children were very frightened, saying 'Israel is going to kill us,' " Salman said, her children pressing curiously around her. "There wasn't any power. The strikes and bombs were so strong we couldn't hear anymore."