Why the Israelis Didn’t Win in Gaza

There are many reasons Israel can't invade. The most obvious is, this time there are lots of foreign journalists in Gaza.  The IDF (Israeli army) is the most cowardly army on earth. They don't attack without first destroying everything in front and to the sides of them, which of course means massive civilian casualties.

This time they can't do this because the operation was largely spontaneous, unlike Operation Cast Lead (in Gaza 2008-2009), so they weren't able to seal the borders.

There's even a NY Times reporter in Gaza, and she's plainly not happy with what she's seeing.  The Times even made an “error" yesterday and referred in the headline to the Israeli attack on "civilian buildings."  A few hours later they referred to "government buildings.”  But today the Times led with the deaths of 11 people, five women, four children (killed by the Israelis Sunday, Nov. 18; the victims are now said to be 12).

Of course, Israel can't be thrilled with this, and they know that in the event of a ground invasion, it'll be scores of civilians killed, not just because they like to kill civilians (which they do) but also because that's the only way the know (how) to fight: destroy everything in your path for miles around.  They can't do that now, but also Netanyahu can't risk significant IDF casualties.  (It would be a) Disaster with an (Israeli) election looming.  So, I still say, no invasion. --Norman Finkelstein 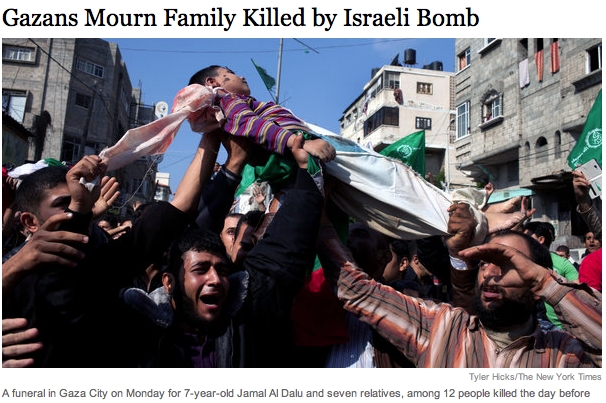 Policy wonk talks of how to start a war with Iran

This is Revelation of the Method from a policy wonk at the Washington Institute for Near East Policy that would have been unheard a few decades ago.

Why are these revelations made? In part because the revealers are confident we have such an insufficient love of peace and truth, that we won’t care that these elitists are seeking ways to trick Iran into attacking us or, failing that, launching an attack on ourselves and blaming Iran.

The revelation in this video is predicated on their own high level assessment that we the people have a depraved indifference to the truth.

History buffs and Lincoln-cultists: listen closely to the speaker’s (truthful) claim that Abraham Lincoln goaded the South into the war (as many other U.S. presidents deceived America into war, as noted in this brief video).