"We have heard from the Israelis that it was an accident" 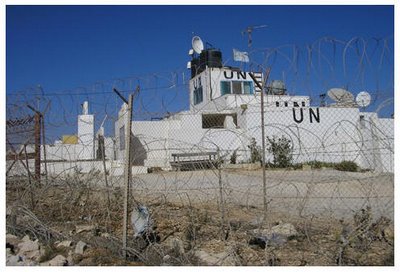 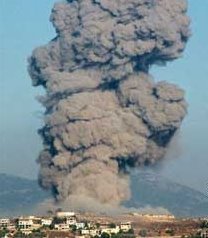 The aftermath of the Israeli terror bombing at Khiyam, in which four U.N. observers were killed. 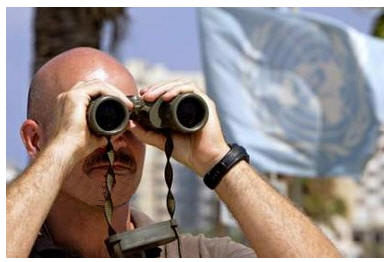 The last thing the Israelis want are witnesses.

JERUSALEM, July 25 -- An Israeli air and artillery attack hit a United Nations observation post near the Israel-Lebanon border Tuesday, killing four members of a U.N. peacekeeping force, U.N. officials announced. The bomb struck a post in Khiyam, near the eastern end of the border with Israel, manned by the United Nations Interim Force in Lebanon, known as UNIFIL, U.N. spokesperson Marie Okabe said.

UNIFIL spokesman Milos Struger said in Lebanon Tuesday that Israeli forces continued firing close to the U.N. post even during a rescue operation. Since the conflict began, he said, a civilian employee of UNIFIL and his wife have also been killed, and five UNIFIL soldiers and one military observer have been wounded.

A senior State Department official said Israel had informed the Bush administration that the attack on the U.N. post was an accident. "It was a terrible tragedy," said the senior official, traveling with Secretary of State Condoleezza Rice. "We have heard from the Israelis that it was an accident."

UN: OBSERVERS MADE MANY CALLS BEFORE STRIKE

BEIRUT, Lebanon (CNN) -- The U.N. observers killed when an Israeli bomb hit their bunker in Lebanon Tuesday called an Israeli military liaison about 10 times in the six hours before they died to warn that aerial attacks were getting close to their position, a U.N. officer said. After each call, the Israeli officer promised to have the bombing stopped, an officer at the U.N. Interim Force in Lebanon (UNIFIL) base in Noqoura said. Finally, an Israeli bomb exploded directly on the U.N. post near Khiyam, killing four U.N. observers from Austria, Finland, Canada and China, the U.N. officer said.

As of Wednesday morning (July 26), three of the four bodies had been recovered from the rubble, an officer at the UNIFIL base in Noqoura said. Israeli Foreign Ministry spokesman Mark Regev said the incident would be "thoroughly investigated" and that the Israeli military had taken measures since the start of its bombardment of southern Lebanon to protect the U.N. observers there. "Israel would never deliberately target U.N. personnel," Mark Regev said. According to Regev, Israeli Prime Minister Ehud Olmert called U.N.Secretary-General Kofi Annan and "expressed his regret at this tragedy in Lebanon."

Annan issued a sharply worded statement Tuesday evening which said he was "shocked and deeply distressed by the apparently deliberate targeting ... of a U.N. observer post in southern Lebanon." He called on Israel to conduct "a full investigation into this very disturbing incident."

"This coordinated artillery and aerial attack on a long established and clearly marked U.N. post at Khiyam occurred despite personal assurances given to me by Prime Minister Ehud Olmert that U.N. positions would be spared Israeli fire," Annan said.

"Furthermore, General Alain Pelligrini, the U.N. force commander in south Lebanon, had been in repeated contact with Israeli officers throughout the day on Tuesday, stressing the need to protect that particular U.N. position from attack."

The timeline provided CNN by a U.N. officer in Lebanon showed the first bomb exploded about 200 yards from the U.N. outpost at 1:20 p.m. Tuesday, prompting the first call by the UNIFIL observers to their designated contact with the Israeli military. The officer said they were assured by the Israeli liaison that he would stop the attacks. A series of about nine more bombs hit within 100 to 400 yards from the observers over the next several hours, with a call to the Israeli military following each explosion. The U.N. base at Noqoura lost contact with the outpost at 7:40 p.m., apparently the time of the direct hit, the officer said.

UN peacekeepers in south Lebanon contacted Israeli troops 10 times before an Israeli bomb killed four of them, an initial UN report says. The post was hit by a precision-guided missile after six hours of shelling nearby, diplomats familiar with the initial probe into the deaths say....The four unarmed UN observers from Austria, Canada, China and Finland, died after their UN post was hit by an Israeli air strike on Tuesday. The UN report says each time the UN contacted Israeli forces, they were assured the firing would stop.

Israel is conducting an investigation into the deaths, and has rejected accusations made by UN Secretary General Kofi Annan that the targeting of the UN position was "apparently deliberate".

DUBLIN, July 26 (Reuters) - An Irish army officer in south Lebanon warned the Israeli military six times that their attacks in the area were putting the lives of U.N. observers at risk, Ireland's Foreign Ministry said on Wednesday. Four U.N. observers were killed in an Israeli air strike in southern Lebanon on Tuesday.

"On six separate occasions he was in contact with the Israelis to warn them that their bombardment was endangering the lives of U.N. staff in South Lebanon," a Department of Foreign Affairs spokesman said.

"He warned: 'You have to address this problem or lives may be lost'," the spokesman said of comments by a senior Irish soldier working as a liaison officer between U.N. forces in South Lebanon and the Israelis.

“Mr. Olmert definitely believes it was a mistake,” said Mr. Annan, referring to Israel’s prime minister, Ehud Olmert. But despite at least 10 calls from United Nations personnel to Israel that their positions were being shelled, Mr. Annan added, “The shelling of the U.N. positions began early in the morning and carried on all day.”

A clearly marked US intelligence vessel was attacked for hours by Israeli war planes and war ships. The surviving American sailors were sworn to secrecy concerning the "accidental" Israeli attack.

MASSACRE IN UN REFUGEE CAMP IN 1996

During an Israeli offensive against Lebanon in 1996, Israeli artillery blasted a U.N. refugee camp at Qana in southern Lebanon, killing more than 100 civilians who had sought sanctuary with UN peacekeepers. It was a deliberate Israeli massacre of Arab women and children which went--as usual--unpunished, having no impact whatsoever on the unstinting flow of US taxpayer cash to the Israeli killers, and of course no prosecution for a war crime. The Israelis claimed the massacre was an "accident."--M. Hoffman II

There have been dozens of mass killings of Palestinian civilians by Israeli forces. Almost of all of these are explained away as "accidents...mistaken identity, stray cannon fire, stray missiles."

"The Zionists are the world's most accomplished and brazen liars."
— Michael Hoffman
_________

This bombing was no accident. Put matricide on the list of war crimes, since the UN gave birth to this Infant Terrible, record it next to the fratricide against the people of Israel for which "Israel" if fully responsible by their psychotic reactions and brazenly false justifications in bombing Lebanon.

Yes, accident of the same caliber as the bombing of infrastructure, to "defend" Israel. The whole attack had no legitimate provocation. The capture of two soldiers does not send civilized nations on a rampage - Israel is showing the world just how insane she is. Israel murders and then defines the crimes as the opposite of what has happened. The repeated calls by the UN peacekeepers reveals that Israel intentionally and with malice bombed the UN post. Israel has stated that they themselves can develop a buffer zone and do not want the UN involved. The theft of land will be considered an act of peacekeeping by Israel to ward off Hizbollah, and all that business about bombing the Army of Lebanon is just another "accident" since Israel wants the Lebanese Army on or close to the border. We enter a vast laybrinth of lies whenever being forced to listen to anything Israel says - what she does tells the truth.

U.N. Secretary-General Kofi Annan falsely accuses Israel of deliberately attacking members of the United Nations Interim Force in Lebanon (UNIFIL), even as Hezbollah repeatedly targets U.N. peacekeepers. Last Monday, an Internet site called Little Green Footballs notes that the United Nations issued a press release reporting that an unarmed U.N. observer was critically wounded by small arms fire originating from a position controlled by Hezbollah. He was airlifted to an Israeli hospital for treatment. The following day, Hezbollah opened fire on a U.N. convoy, forcing it to turn back. On Friday, U.N. forces issued a press release reporting that "Hezbollah fired from the vicinity of five U.N. positions" in southern Lebanon, and that the number of troops in a Ghanaian battalion of the U.N. is "somewhat reduced" due to Hezbollah firing from near the U.N. positions, which provokes retaliatory shelling from the Israeli side.