David Irving on the Nazi Judeocide

David Irving on the Nazi Judeocide 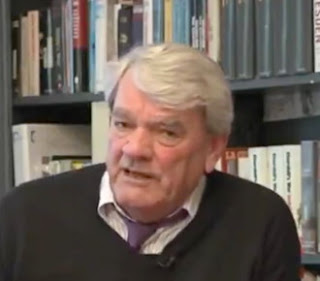 Dissident historian David Irving, author of the two-volume Hitler’s War and dozens of others books, speaks for 21 minutes in this video, which is itself an excerpt from a considerably longer, multi-part talk which was video-recorded in the library of his home some years ago. Precise details concerning its provenance will hopefully be forthcoming from the host site.

If you watch the video, the visible, edited breaks are apparently Mr. Irving’s own and not those of the host website, CODOH (a “Holocaust” revisionist organization founded by the late Bradley R. Smith and now directed by Germar Rudolf). CODOH titled this video, “How David Irving Thinks the Holocaust Happened.”

Despite Mr. Irving’s affirmation of the Judeocide, he has been hounded and imprisoned because he departs from the canon of the official “Holocaust” liturgy. On certain dogmatic points no historian may dissent without suffering damage to his or her career, reputation, livelihood and freedom.

Irving dissents in several respects, in particular in attempting to lessen Hitler’s culpability by insisting that underlings conducted the Judeocide for years without the führer's knowledge. This notion, even if it were true, violates everything we know about executive responsibility. If I am the director of a bank and the officers beneath me who I have appointed and oversee, and with whom I collaborate regularly, are repeatedly stealing from the bank, my negligent oversight renders me as responsible as they are for the looting. To posit Hitler, who had “eyes” and “ears” independent of Heinrich Himmler’s intelligence apparatus, as duped by his top ministers concerning so enormous a crime as the mass murder of Judaic people, is not credible. How could Josef Goebbels (as evidenced by his diary) know of it, and not Hitler?

Moreover, Mr. Irving himself declares that Hitler personally ordered the commission of a horrific crime, the expulsion of all of Germany’s Judaic residents into the inferno in the east, during a time when a savage war of extermination was raging there between the Soviets and the Nazis. Hitler gave no thought concerning how this large Judaic population would be fed and housed, as their trains arrived behind the German lines, while German generals, whose resources for the Wehrmacht and SS troops were stretched to the breaking point, scrambled for supplies and dodged Russian bombs and bullets? How did Hitler expect his generals to provide for the tens of thousands of extruded Judaic civilians?

It should be apparent that upon, or soon after arrival, Hitler's expelled Judaics were shot en masse by Nazi officers as a potential partisan threat, while the old and the very young were left to freeze and starve to death. Hitler had no knowledge of this mass murder, and neither did he anticipate it?

How was Hitler’s expulsion of the Judaic population of Germany to the eastern war zone any less an act of Judeocide than what Himmler ordered?

Michael Hoffman is the author of Adolf Hitler: Enemy of the German People, and nine other books.

"...In the Spring of 1942, after the Wannsee Conference, where they discussed the logistics, the transportation movements of Hitler’s order —  all of the Jews had to be thrown out of Germany, shipped to the East. This was Hitler’s order quite without question. In Jan. 20, 1942 this Conference had taken place at Wannsee and a month later another conference took place and the report on that was circulated among the ministers. You can see a reference to it in Goebbels’s diary. He says, 'Well obviously not much is going to remain of the Jews when all this operation is over,' he says. 'You can say that about 80% of them are going to be wiped out and 20% of them are going to be put to work.' That’s what he writes in his diary."

“...October 4, 1943 the German diplomat in Rome, which had just been occupied by the Nazis, sent a telegram to the Foreign Ministry in Berlin saying he had just been told by the SS chief in Rome that he had received orders to round up the 12,000 Jews in Rome and ship them to northern Italy where they were to be liquidated. And he uses the word liquidated. No euphemisms there.”

“...At one point in a speech in October, 1943 Himmler actually says, in a speech to SS generals, ‘I know a lot of you understand why we’re killing the Jews but a lot of you don’t quite understand why we’re also killing the women and children.’ He says, ‘I have taken this decision myself because it would be wrong to leave coming generations to deal with this problem all over again.”

“...The systematic mopping up operations behind the Eastern front in cities like Riga and Minsk. Minsk was in white Russia. The governor of white Russia was Wilhelm Kube. Kube’s son lives in Argentina. Now, his son recently sent me 200 negative photographs from his father’s collection. I scanned these in very close detail and I enlarged one of the scans. One of the photographs shows just a huge heap of baggage...If you zoom in one of the labels on one of the bags you can see that the name begins with Sarah, so it’s probably a Jew. This was typical of what happened in Minsk. The Jews were liquidated in Minsk as well. And I think there’s no question that the Jews in Minsk and Riga and other cities along the Eastern front, particularly down the far south —  they were rounded up and taken out in the outskirts and liquidated —  systematically liquidated as part of the anti-partisan operations. Preemptive killing. So this did happen. It happened on a huge scale.”

Hitler's Final Political Testimony: (Mr. Irving paraphrases Hitler’s last will from memory): “I command my successor to carry on the remorseless fight against the Jews, which we have carried on for the last twelve years, although we have used methods that are far more humane than have the enemy, the Allies, with their ruthless bombing war against German civilians and German cities.”
________________

Retired four star Marine Corps General and former Secretary of Defense James Mattis was being kind when he wrote that President Donald Trump is of “limited cognitive ability.”

A less diplomatic observer who had been as close to the president as Gen. Mattis, might have said that he was of limited intelligence (though possessed of street smarts and cunning).

We saw Mr. Trump’s dim light bulb emitting its low wattage as he stood with American military officers spouting the same monotonous and risible talking points that emanate from the mouth of the president’s ventriloquist, Israeli Prime Minister Binyamin Netanyahu.

To call Trump an Israeli agent is to do him an injustice. He is more than that. Like others in his cabinet (Pompeo and Pence) he is an Israeli golem. In legend, the golem was a non-Judaic Frankenstein created in Renaissance Prague by the Kabbalistic Rabbi Judah Loew to kill the enemies of the Talmudic theocracy that masquerades as an Old Testament creed. The golem is mindless and not subject to reason or logic, just like Trump and his gang of Neocon chicken hawks, sanctioners, and Israeli idolators.

Observe Mr Trump’s pathetic regurgitation of Israeli propaganda talking points on the morning of January 8 in his speech to the nation, wherein he termed Iranians the number one terrorists in the world.

Really? So soon he forgets ISIS, the terror army inspired by a blueprint established by the 100% toxic Saudi Wahhabist theology, responsible for inspiring massive terrorism in the Middle East, including wholesale slaughter of the Christians of Syria and Iraq, while launching dozens of terror-massacres in Britain, Europe and America. Nowhere is there an Iranian hand in any of this.

ISIS, formed from remnants of al Qaeda, gets a pass from Trump because ISIS does not threaten Israeli control of Palestine, while the Iranian government consistently demands justice for Palestine. Our foreign policy is driven by Israeli needs and requirements, not the interests of the American people.

We have a pretend media which, along with Trump, pretends Iran-backed Shiite militias did the most harm to U.S. troops in Iraq. In truth, the main killer of Americans in Iraq were the Saudi-backed Sunni remnants of Saddam Hussein’s army, which years later became ISIS. Who in the mainstream media—Left or Right— reports this fact as a challenge to Mr. Trump’s repetition of Israeli disinformation?

Secretary of State Mike Pompeo is said to have urged Trump to assassinate Qasem Soleimani, the Iranian general who drove ISIS terrorists out of Iraq and al-Qaeda terrorists from Syria. Soleimani saved Christian lives in the Middle East, but these are mostly Greek Orthodox and Catholic lives, about whom Protestant fundamentalists in the U.S. care next to nothing, preferring Talmudists to them.

Mr. Pompeo is a war-golem of the Israeli-worshipping fundamentalist “Rapture” theology of US Churchianity.

“We will continue to fight these battles. It is a never-ending struggle...until the Rapture, be part of it, be in the fight.”
—Mike Pompeo, God and Country Rally,” Summit Church, Wichita, Kansas, June 28, 2015.

The lunatic Rapture doctrine was invented in the 1800s as part of the Protestant "Dispensationalist" doctrine favored by fundamentalist partisans of counterfeit "Israel.” The Church had no knowledge of it before the nineteenth century.

The fact that the theology dominant in the Israeli state which the Rapture enthusiasts adore is essentially Talmudic Antichrist, is not an issue for Messers Pence, Pompeo and their millions of fellow, alleged “evangelicals."

Americans need to have the tools to deconstruct the fake Christianity of powerful Talmudic “evangelicals” such as Mike Pence and Mike Pompeo. One such tool is Judaism’s Strange Gods: Revised and Expanded — banned almost everywhere books are sold.

If we do not unmask the foundation of the Israeli Antichrist theology, sooner or later the “America First” Commander-in-Chief who has promised to extricate us from endless conflicts and entanglements overseas, will take us into war for “Israel” with the 80-million Persian nation that is four times the size of France and very different from the Arabs we have starved and mass murdered with impunity in Iraq, all in the name of democracy and “fighting terrorism” of course.

At this link, this column is available as a flyer for printing and public distribution