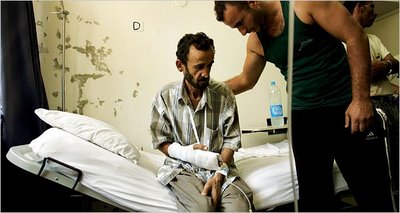 This man's mother, wife, and five children were all killed by the Israelis in Qana. 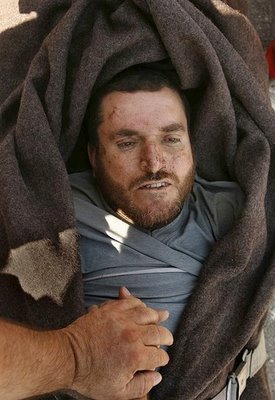 One of the injured, Mohammed Shalhoub, lies on a stretcher on his way to the hospital. His 2-1/2 year old daughter was killed in the bombing. 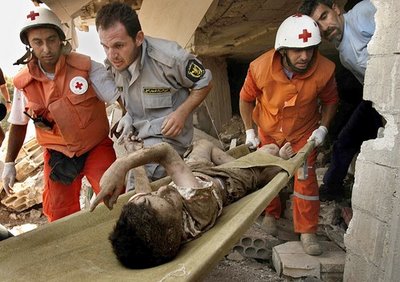 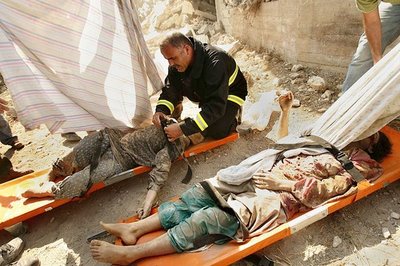 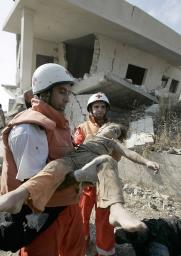 A rescue worker removes the body of a Lebanese child from the rubble of a building in the aftermath of an Israeli terror bombing in the village of Qana, near the southern Lebanese city of Tyre.

Images of children’s bodies tangled in the building’s ruins, being carried away on blankets or wrapped in plastic sheeting were aired on Arab news networks. The televised images of stiffened, dust-covered bodies of children being pulled from the wreckage spread rage. In Qana, Khalil Shalhoub was helping pull out the dead until he saw his brother’s body taken out on a stretcher. “Why are they killing us? What have we done?” he screamed.

Iraq’s top Shiite cleric, Grand Ayatollah Ali al-Sistani, demanded an immediate cease-fire in Lebanon, warning the Muslim world will “not forgive” nations that stand in the way of stopping the Israeli bombing. Headlines of “Carnage’’ and “Barbaric’’ filled the front pages of newspapers across the Arab world July 31, and a member of the parliament of Kuwait, a staunch ally of the United States, called American policy makers “sons of dogs’’ for supplying the bombs for the Israeli attacks, news services said. The European Union foreign policy chief, Javier Solana, issued a statement saying that “nothing can justify” the Qana "airstrike."

Nearly 550 Lebanese civilians have been killed in Israeli attacks, with as many as 200 more missing, according to the Lebanese Health Ministry. Nearly 2,000 have been wounded, the ministry said. Israel apologized for the deaths in Qana but blamed Hezbollah guerrillas. The Israeli defense chief, Amir Peretz said, “An Israeli pilot has never been given an order to hurt civilians.” 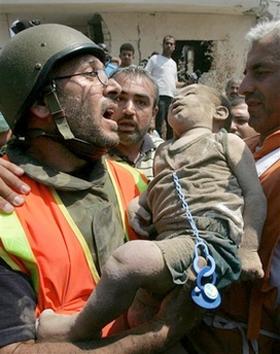 Today we awaken to the dreadful news, according to the Associated Press, that the Israelis bombed several homes in the southern Lebanon village of Qana early Sunday, "killing at least 56 people, most of them children, in the deadliest attack in 19 days...."

Even Jack Straw, the former British Foreign Secretary, said of the Israeli attacks: "These are not surgical strikes, but have instead caused death and misery among innocent civilians."

This is the second Israeli mass murder at Qana. In April, 1996, Israelis murdered 102 Arab civilian refugees at a United Nations camp in Qana. An Amnesty International report described the Israeli attack as deliberate. The July 31, 2006 New York Times describes the 1996 slaughter in accordance with the official Israeli military account, as a case of the Israelis having "mistakenly shelled a United Nations post in Qana..."
The Israeli holocaust against Lebanon continues, while the world does nothing. Ever more Arab women and children in Lebanon are murdered with impunity. They are less than human in the eyes of the West.

Nothing like this would ever be permitted if it were Judaic children who were dying. In such a case, the words, "The Holocaust is happening again, the world must not stand by silent!" would reverberate from every pulpit, radio, TV and newspaper front page in America. But since it is the children of Lebanon who are being killed, "sub-human Amalekites" according to the secret teaching of the Orthodox rabbis, the US obstructs a ceasefire, with help from American journalists, editors, clergymen and the US Congress.

This is a shame, and a disgrace. It proves that the perpetual, pious human rights tears shed over the "Nazi Holocaust against the Jews" in schools, churches and national museums and memorials day-in-and-day out, have nothing to do with ensuring that it "never happens again" to "any other people."

Rather, "The Holocaust" is a cynical power-politics hammer used to build special privileges and a sense of sacred awe and racial superiority for Judaics, which in turn renders them forever immune from war crimes prosecutions, or any interdiction of the holocausts which they perpetrate against Palestine and Lebanon.

If "The Holocaust" was a true human rights lobby for all mankind, then Elie Wiesel, Deborah Lipstadt and Steven Spielberg would be using their clout and prestige to demand an immediate end to Israeli mass murder in Lebanon.

Instead, Wiesel is on record supporting Israeli bombing in Lebanon, while the vast majority of the Israeli people, including the "Holocaust Survivors" among them, also endorse it.

"Holocaust" propaganda has dulled the moral sense of the West. The "Holocaust" is little more than an arm of Zionist psychological warfare for the maintenance of Judaic superiority, racial and ethical, throughout the earth, not for saving the lives of other marginalized peoples.

In fact, it seems to have given the Israelis a hubris as supra-human ethicists with a license to kill civilians without moral qualms or the least fear of war crime prosecution.

No doubt the movie Spielberg will make about what is happening in Lebanon, will show Israeli commanders and troops agonizing about their bombings. But in reality there are no such reservations, just exultation and the arrogance of stone-cold killers swaggering in the knowledge that their murder spree is backed by US super-power money and might. (The Israelis are not so brave when they have to confront Hezbollah militiamen on the ground, man-to-man, rather than from 30,000 feet up in the cockpit of a jet-bomber).

The racial and moral superiority engendered for the Israelis by "Nazi Holocaust" propaganda is the reason why the massacre at Qana in 1996 was forgotten, allowing it to happen all over again in 2006.

"Never Again" does not apply when it comes to Israeli extermination of the people of Lebanon, according to an exact Zionist timetable that brooks no "ceasefire." The Israelis will cease fire when every Lebanese woman and child they intend to slaughter is properly dead and buried, and not before. And the "Nazi Holocaust"-saturated human rights campaigners will sit on their hands, exactly as they have been trained to do by Spielberg and Wiesel, and a parade of professors and preachers.

Tears, guilt, classroom curricula, movies and museums are reserved for the victims of the Nazis. Cluster bombs, napalm, missiles and cannon shells are reserved for helpless Arab mothers and their children, with applause from Hillary, Elie and four hundred members of the House of Representatives.

This, in part, is why I am a "Holocaust" revisionist. As sanctimony, "The Holocaust" exceeds the Pharisees in bloated hypocrisy, and as a prop for Israeli mass murder, it is a bloodthirsty alibi for arrogant Zionist supremacy and mass murder.

An Israeli air raid on the Lebanese village of Qana which killed at least 56 civilians was the result of indiscriminate Israeli bombing which amounts to a war crime, Human Rights Watch said. The New York-based rights group said Sunday's strike on Qana which killed 37 children suggested the Israeli military was treating southern Lebanon as "a free-fire zone."

"The Israeli military seems to consider anyone left in the area a combatant who is fair game for attack," Human Rights Executive Director Kenneth Roth said in a statement. "(The Qana attack) is the latest product of an indiscriminate bombing campaign that the Israel Defense Forces have waged in Lebanon", the statement said. "Indiscriminate bombing in Lebanon (is) a war crime," read the statement's headline.

Israel says it warned civilians to leave southern Lebanon, where it says it has been targeting Hizbollah guerrillas. But the Lebanese government says Israeli bombardment of roads and cars made it impossible for people to escape...Human Rights Watch said responsibility for Qana rested "squarely with the Israeli military”.

The fulcrum upon which our foreign policy turns is human slaughter. The Shock and Awe of Iraq and the Shuck and Jive of this supposed "kidnapping," testify with each newly added death that sociopaths rule the day. A credible report from Forbes stated that the soldiers were captured inside Lebanon. I agree that the banner which goes before the vast arsenal of this Poltical Zionist machine has the "Holocaust" emblazened to give warning that no one dare question the actions of Israel. But the sober minded do question, and the answers condemn the actions of Israel, and the United States for supporting and sending aid and arms for this wanton agression, and for support of this ongoing nest of lies and media spin. The truth is more evident than ever that Israel is a king-pin, a wedge, and a ignition switch to engage the region in the wider "conflict". As we teeter out on our staged Imperial limb, the mad neocon hounds bark and claw for the use of tactical strikes against Iran. No end in sight exists for the lengths to which this ideology of slaughter will go - and when the smoke clears, and the death count hangs over us like some ghastly funeral pyre, the hounds will be frothing at the mouth that we attack China, because they are playing this insane Chess game to the finish. Humanity is the pawn.

The officals of Israel say that leaflets were dropped so the people could flee, one glich - the people are aware of the bombings and killings of those in convoys attempting to flee, so out of fear they remain put. Israel is standing upright before the world in full insane glory, as if she is the judge of what is insanity. Hezbollah is looking more like a strong resistance force than any rogue terrorist group. Terrorism is in the eye of the beholder, and Israel is filling that bill to the hilt.

"The Antichrist" by the Rev. Paschal Huchede, based on the teachings of the Fathers and Doctors of the Church warned of the violence the Antichrist will employ, amongst other devices.

4. His Means of Action

To insure the success of his enterprise, he will employ means that naturally secure the service of men, such as imposture, recompence, violence and miracles.

By his deceitful craft he will detach the minds and hearts of all peoples from the religion of Jesus Christ. By his incomparable eloquence he will represent Jesus as an imposter; he will attack His doctrine and institutions, according to the teachings of St. Cyril of Jerusalem (Cat. 15), Damascus (c. 27), Jerome (in his work on the prophet Daniel).

After having weakened the faith of Christ in the minds and hearts of many, he will proceed to show that the law of Moses still prevails; he will re-establish the Sabbath and all the legal observances; and he will invite all the Jews to re-establish their nationality, after which he will declare himself to be the true messiah; he will endeavor to prove the truth of his assertion from Scripture - he will declare his design of rebuilding Jerusalem and the temple and of bringing the whole world under his dominion. The carnal Jews, finding these projects in perfect harmony with their own prejudices, will easily acknowledge for the Messiah the one whom they desire. And after having at first despised and scorned him, they will subsequently receive and proclaim him king. (Dan. 11:21). According to St. Cyril of Jerusalem (Cat. 15), he will win the esteem and attachment of mankind by his urbane and unbounded kindness.