US: Okay for Israelis to holocaust Lebanon for another week 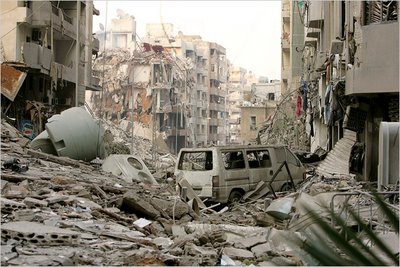 Another week of this

"Officials said the U.S.-Israeli plan is for Israel to bombard Lebanon for about another week"
— New York Times

"Bucking the international community's calls for a cease-fire in the Middle East, Jewish organizations sent 50 community leaders from across the country to meet with Bush administration officials in an attempt to buy Israel more time to inflict as much damage as possible on...southern Lebanon.

"Anti-Defamation League National Director Abraham Foxman visited the Saudi ambassador in Washington to thank him for his country's condemnation of Hezbollah's actions, though the focus of most Jewish organizations, including the ADL, were to praise President Bush for repeatedly defending Israel's right to defend itself, but mostly to keep America from shutting down Israel's military operations prematurely.”

UPDATE, Washington Post | July 25: In a subsequent meeting in the West Bank city of Ramallah with Mahmoud Abbas, president of the Palestinian Authority, (Condoleeza) Rice rebuffed Palestinian calls for an immediate cease-fire in the Lebanese conflict, insisting instead on a "sustainable" end to the hostilities.

Los Angeles Times | July 26, 2006: The Bush administration did not budge from its stance that Israel should be allowed to deal a more decisive blow to Hezbollah before any cease-fire. Rice, in Jerusalem, stood by Olmert as he pledged to "carry on the fight" against the Shiite Muslim militant group. Before she left for Rome, Rice visited the West Bank city of Ramallah, and again turned aside calls from the Lebanese for an immediate cease-fire. She said an "enduring" peace was more important and possible only with the disarming of Hezbollah. "It is time for a new Middle East," she said, with Olmert nodding approvingly at her side. "And to those who do not want a new Middle East, we say we will prevail, they will not.” (Emphasis supplied).