If a man and a woman are drowning in a river, first they'll save the man, 'who is obligated to perform more commandments,' whereas a woman's 'wisdom is only in the spindle.' In fact, 'words of Torah should be burned rather than being given to women.'

"We will direct your attention to (Talmud) Tractate Shabbat, which does a good job of summing up halakha's attitude toward women: 'a sack full of excrement with a bleeding hole."

If you would like to know the source from which your brothers derive their brazen behavior, go over to the study hall and open a page of Talmud. It's true that the Torah has 70 faces, but the trend of these faces is clear: The source of the pollution is in halakha (Jewish law) itself.

What is happening in Beit Shemesh and its satellites is not "contrary to halakha," it is mandated by halakha. And the rest will be told to the grandmothers, daughters and granddaughters.

Anyone ignoramus knows that the Torah's "ways are ways of pleasantness," that "the honor of a king's daughter is within," and that "proper behavior comes before the Torah," but it's worth knowing more. It's worth knowing that a woman is unfit to be a judge, and is also unfit to give testimony. She is unfit for any public position with authority. "Thou shalt appoint a king over thee" - a king and not a queen. A daughter, commanded the sages, must not be taught Torah, because "the mind of woman is not suited to be taught, but [only] to words of nonsense." Women are light-minded and have little knowledge.

And if a man and a woman are drowning in a river, first they'll save the man, "who is obligated to perform more commandments," whereas a woman's "wisdom is only in the spindle." In fact, "words of Torah should be burned rather than being given to women."

The extremists who spit at women, who call themselves Sikarikim, learned their lesson 101 times and learned it well: A husband would do well not to let his wife go outside, into the street, and should restrict her outings "to once or twice a month, as necessary, since a woman has no beauty except by sitting in the corner of her house." Because inside the house - very deep inside - her glorious honor awaits her: "Every woman washes her husband's face and feet and pours him a cup and prepares his bed and stands and serves her husband. And any woman who refrains from doing any of these tasks that she is obligated to perform - is forced to do them." Some recommend forcing her with a whip or by starvation "until she gives in." And needless to say, she is at her husband's disposal whenever he is overcome by a desire "to satisfy his urges with her." And if she continues to rebel, he always has the right "to divorce her without her consent."

And there are many similar halakhot, only a few of which we have collected here. Nor have we cited everything in the name of the ones who said them, for lack of space. The readers are invited to find the references on Shabbat - and to browse around - on their own; this is a good opportunity for study.

We will direct your attention to Tractate Shabbat, which does a good job of summing up halakha's attitude toward women: "a sack full of excrement" with a bleeding hole. Some people will seek to console themselves: It's true that this is the halakha both m'doraita (from the Torah ) and m'drabanan (from the rabbis ), but that is not what is taught nowadays.

But it suffices to listen to the sermon the sage Rabbi Ovadia Yosef delivered five years ago, based on the well-known halakhic work Kitzur Shulchan Aruch:  "A man must take care not to walk between two women or between two dogs or two pigs, and men should also not allow a woman or a dog or a pig to walk between them."

Treating women as impure and filthy begins with halakha and continues with actions.  As long as the religious and ultra-Orthodox (Israeli political) parties - Shas, United Torah Judaism, Habayit Hayehudi and National Union, none of which have any women in the Knesset - are not disqualified, their nakedness will continue to sing out and the nakedness of the land will be revealed. (End quote from Yossi Sarid).
______________

Michael's Hoffman's Truth Mission is solely supported by the sale of his books, newsletters, CDs and DVDs,  and your financial support.
______________

Hanukah concluded Dec. 28. This year Hanukkah entailed the ritual assassination of the reputation of Rep. Ron Paul (R.-Texas) by the New York Times. Beginning on Dec. 25, the fifth day of Hanukkah, the Zionist newspaper published an investigative report concerning support which Rep. Paul is receiving in his primary campaign from minuscule white racist groups and from populists on staff atThe American Free Press newspaper.
While we have serious reservations about Rep. Paul due to his support for the system of usury and the Austrian School of Economics, we believe that he promotes this system of finance out of tragic (and abysmal) ignorance. He is, however, an honest man who distinguishes himself from the entire field of Republicans in the primary contests by the crucial fact that he is the only peace candidate and the only genuine enemy of of the privately controlled Federal Reserve banking structure which is endowed by Congress with the power to manufacture money.

The Times referenced twenty-year-old issues of Rep. Paul’s newsletters that made politically incorrect statements about Martin Luther King and compulsory integration. Together with his support for ending foreign aid and abolishing the Federal Reserve Bank -- which a Dec. 27 New York Times editorial published on the 7th day of Hanukkah described as “claptrap” — all this allegedly “disqualifies" him as a trustworthy candidate for President of the United States:

"Ron Paul long ago disqualified himself for the presidency by peddling claptrap proposals like abolishing the Federal Reserve, returning to the gold standard, cutting a third of the federal budget and all foreign aid and opposing the Civil Rights Act of 1964. Now, making things worse, he has failed to convincingly repudiate racist remarks that were published under his name for years — or the enthusiastic support he is getting from racist groups. Mr. Paul, a Republican congressman from Texas who is doing particularly well in Iowa's precaucus polls, published several newsletters in the '80s and '90s with names like the Ron Paul Survival Report and the Ron Paul Political Report. The newsletters interspersed libertarian political and investment commentary with racial bigotry, anti-Semitism and far-right paranoia....Mr. Paul, who, beginning in 2008, has disavowed the articles and their ideas, now says that most of them were written by others and that he was unaware of their content. Even if that were the case, it suggests a stupendous level of negligence that should force a reconsideration by anyone considering entrusting him with the White House."

Peace is not a qualifying factor for the New York Times. The newspaper does not detract legitimacy from the presidential aspirations of Rick Santorum, Rick Perry, Michelle Bachmann, Newt Gingrich or Mitt Romney because if elected president, each of these candidates would burn and bomb Iran with American warplanes as soon as a pretext to do so would present itself. The spectacle of thousands of Iranian civilian corpses does not trouble the liberals at the Times. What infuriates them is the possibility that the Israeli capacity to make war on Iran, Palestine and Lebanon would be seriously curtailed by a Paul presidency.

Hitchens has died: he once debated Hoffman

Usury and the Money Power 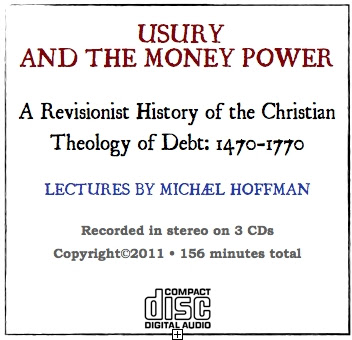 Usury and the Money Power: A Revisionist History of the Christian Theology of Debt, 1470-1770


This is a series of lectures based on ongoing research being gathered for Michael Hoffman's proposed book, "Usury: The Mortal Sin that Was and Now Is Not." In these audio CDs, Hoffman challenges the conventional history of the revolutionary permission for usury, documenting a pre-Protestant, Catholic source for this permission. In addition, he offers evidence of widespread, early Puritan resistance to usury.

This 2.5 hour lecture series on 3 CDs counters the widespread ignorance of the history of early Protestant resistance to usury and exposes the propaganda which assigns the blame for usury to John Calvin, rather than the philosophers and theologians backed by the Fugger banking dynasty and indoctrinated by the liberal Tübingen school of Catholic philosophers.


We cannot successfully contest the Wall Street/Federal Reserve system without accurate knowledge of the 1500-year history of the Christian campaign against indebtedness, social injustice and plutocracy. This history is mostly unknown today.

Many contemporary conservative Christians imagine that the Church was a sort of early branch of laissez-faire capitalism, and that it was the Protestant Reformation which was responsible for the revolutionary overthrow of the Christian ban on interest on loans. None of this is true.

Setting the historical record straight by telling the suppressed story of the Catholic and Protestant churchmen who vigorously fought usury, as well as the modernizing Judases who supported it, gives us the clarity of vision necessary in our time to successfully fight the dragon that is the Money Power. Note: these talks are study lectures, not entertainment.