The New Inquisition Heats Up

In the name of promoting “tolerance," YouTube is helping to establish a dictatorship over the mind of man

In censoring and deplatforming dissidents, the Tech Tyrants cite no evidence and allow no appeals. Scholars wrongly accused are simply silenced. There's no due process. All the tyrants need do to suppress revisionist history that they hate is to falsely label it hate speech. The media automatically accept the accusation without investigating it. 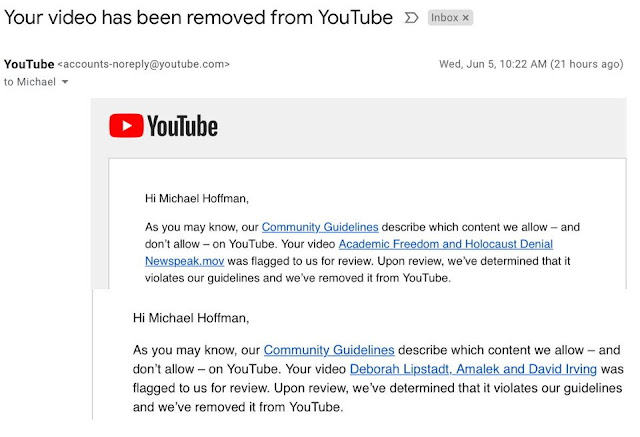 The Google-owned online video-streaming service YouTube has announced a new initiative to ban videos that advance human knowledge in ways that the Anti-Defamation League (ADL) of B’nai B’rith disapproves. This thought policing is being deceitfully painted in the controlled media under false pretenses, as a long overdue clamp-down on "neo-Nazis and white supremacists.” We are none of those things.

This sweeping and inaccurate generalization is intended to mollify civil libertarians who might otherwise protest the ban if they knew that it is aimed at dissenting and non-conforming journalists and historians — which, in fact, it is.


Meanwhile, we know of influential rabbis at elite yeshivas in the Israeli state who laud Adolf Hitler yet are not the subject of the latest inquisition, or any scrutiny or negative publicity from the American media. Unknown to the public at large, neo-Nazi ideology is supported by the Establishment without interdiction by YouTube, Facebook or other social media.

“Academic Freedom and Holocaust Denial Newspeak” — an analysis of Orwellian manipulation of language.

Knowledge and reason are banned.

All of these acts of suppression of knowledge are intended to make the world safe for Zionist and Talmudic deception. The Internet was established for the purpose of the advancement of human knowledge. The attempt to demonize radical knowledge will only make that knowledge more attractive to truth-seekers.

YouTube’s censorship bears the hallmarks of a Soviet tribunal. Notice that no quotes from the allegedly offending videos are presented as evidence of “hate.” Why not? Because the raison d’être for our lectures and addresses is the exposure of hatred against marginalized human beings. No contrary evidence need be presented. It is enough that we are accused by the neo-Stalinists. Their accusation makes us guilty. Facts are irrelevant. If this isn’t tyranny, what is?

Yesterday we shipped a case of Judaism’s Strange Gods: Revised and Expanded to Pastor Chuck Baldwin in Montana. His secretary reports that they can’t keep up with the demand. Furthermore, The Nation of Islam is producing a 50 minute anti-racist video consisting of a seminar hosted by their distinguished Historical Research Department featuring this writer's intensive talk analyzing the Talmud and other racist rabbinic texts, to a gathering of some two hundred Black Muslim scholars in Chicago last February.

The ban on our videos and books tend to demonstrate that the ADL and similar unregistered agents of the Israeli terror state who pressure YouTube, have something to hide.

They cannot answer informed critics of Talmudic and Kabbalistic dogma and the Israeli holocaust against the Palestinians, so they resort to despotic censorship. This betrays a terrible weakness and vulnerability on their part.

Seventy-five years ago today, June 6, Pastor Earl Jones of New Mexico and his brother, landed on the beaches of Normandy. His brother didn’t make it. Pastor Jones lived to teach this writer a thing or two, including that no matter how many bullets are flying, you keep moving forward.