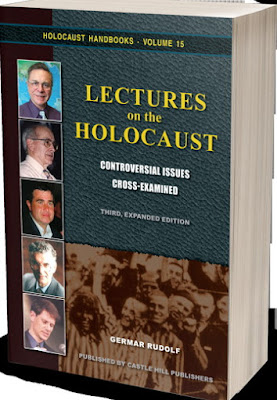 We are in the midst of the American Library Association’s annual “Banned Books Week,” the eponymous celebration of books forbidden by censors and pressure groups in the United States. While the event purports to focus on books deemed too dangerous for impressionable minds, the daring entries showcased this year include Huckleberry Finn and The Handmaid’s Tale, the televised version of which swept the Emmy awards earlier this month.

Missing from this largely self-congratulatory liberal exercise are the most interdicted books of our time, the contrarian World War II revisionist histories luridly emblazoned with the literary equivalent of the Mark of Cain, “Holocaust denial.”

Last February the World Jewish Congress and the Yad Vashem Holocaust Museum succeeded in convincing the heretofore libertarian Jeff Bezos that books by leading revisionist scholars such as Carlo Mattogno and Germar Rudolf should be made to vanish from the web pages of Amazon, where they had been sold for years. What little media coverage was accorded the ban made it appear as though only three books had been removed by Mr. Bezos, when in fact hundreds were banned (for a partial list see here).

We contacted the American Library Associations’s Office for Intellectual Freedom, as well as the co-sponsor of Banned Books Week, the American Booksellers Association, demanding to know when and how they intend to redress the scandal of mass book-banning at Amazon. Because revisionist critiques of the Auschwitz homicidal gas chamber dogma are grotesquely misrepresented and demonized, in our communication we included a link to an online pdf. file of Mr. Rudolf’s monumental work of erudite historiography, Lectures on the Holocaust. All we have received in return is the infamous silent treatment.

The hypocrisy is breathtaking. An enormous facade of defiant freedom of the press has been erected by the Left, giving every impression of militant advocacy for books damned by small-minded philistines and powerful lobbies, and yet policed out of consideration are the very works that scintillate with the frisson of the anathematized, and which are consigned to literary oblivion by the supposed champions of the right to read what we please.

Banned books that are banned by Banned Books Week? Can it get any more surreal?

"In recent months, Google has confronted a new and unsettling trend: Its top search results for questions about the Holocaust lead to neo-Nazi sites...on Tuesday, a Google spokesperson told Fortune it is making some changes. 'Judging which pages on the web best answer a query is a challenging problem and we don’t always get it right,' said the spokesperson. 'We recently made improvements to our algorithm that will help surface more high quality, credible content on the web. We’ll continue to change our algorithms over time in order to tackle these challenges.”

“...The changes come in the wake of news reports that Google’s  top search result for “Did the Holocaust happen?” was a page by the White Supremacist group, Stormfront:  The update to the algorithms appear to be kicking in already as the Stormfront site has dropped, and the top result is to a link by the United States Holocaust museum."

Earlier this week, when the New York Times reported on Google's search engine demotion of a far-Left group, the World Socialist web site, the provenance of this algorithmic tinkering — Google’s attempts to suppress access to sites that question the "Holocaust” liturgy — was omitted.

Times reporter Daisuke Wakabayashi provided plenty of ammunition against Google, but only in connection with falsifying search engine results for Leftist web pages:

“They’re really skating on thin ice,” said Michael Bertini, a search strategist at iQuanti, a digital marketing agency. “They’re controlling what users see. If Google is controlling what they deem to be fake news, I think that’s bias.”

We agree. But to test the sincerity and force of these libertarian sentiments the datum that "Holocaust denial” was the inaugural victim of Google's rigged search engine, should not be banned from reports on the controversy.

Denying web traffic to World War II revisionist web pages would appear to be unworthy of notice by the fake news media, just as Amazon's ban on revisionist books is down the memory hole.

Michael Hoffman is the author of nine books, including The Great Holocaust Trial: The Landmark Battle for the Right to Doubt the West’s Most Sacred Relic, a work formerly outlawed by the government of Canada and seized and destroyed by Canadian Customs.

File a report on a banned (“challenged”) book 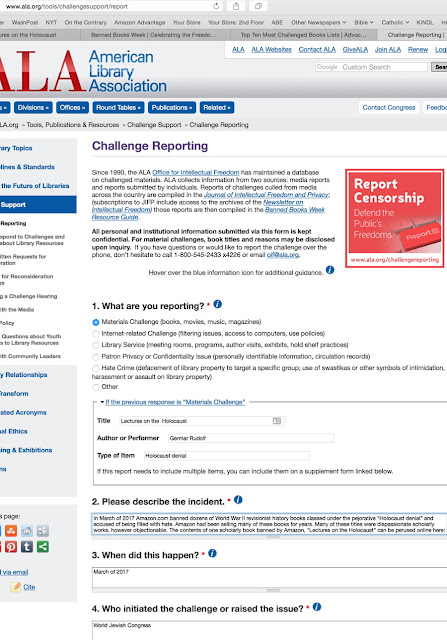 The liberals have sallied forth to condemn Donald Trump’s words at the United Nations —  that if Kim Jung-un (“Rocket Man”), continues his belligerence, the U.S. will “totally destroy North Korea.”

These are the same liberals who applaud, salute and hallow the U.S. attempt to totally destroy Imperial Japan and Nazi Germany during World War II —  men, women and children; their cities and cultural heritage.

These are the liberals for whom Bill Clinton’s former Secretary of State, Madeleine Albright, is a beacon of sanity on the world stage. Albright, the liberal humanitarian oracle, was interviewed May 12, 1996 on the CBS news program “60 Minutes.” CBS correspondent Lesley Stahl, speaking of U.S. sanctions against Iraq, asked Albright, “We have heard that a half million children have died. I mean, that’s more children than died in Hiroshima. And – and you know, is the price worth it?”

Albright: “I think this is a very hard choice, but the price – we think the price is worth it.”

Trump’s declaration is a legacy of the U.S. government's 20th century policy of genocide against demonized civilian populations, whether Iraqi, Palestinian, German or Japanese.

Indeed, Trump was followed at the United Nations podium by Israeli Prime Minister Binyamin Netanyahu, whose government has on at least two occasions (at Qana in 1996 and in Palestine in 2009), murdered Palestinian and Lebanese civilians who were harboring in clearly marked U.N. compounds that were supposed to be off limits to attack. The intentional Israeli massacre at the United Nations enclave in Qana killed 106 civilians.

Furthermore, in 1948 U.N. envoy Count Folke-Bernadotte was murdered by an Israeli terror gang, one of whose leaders was Yitzhak Shamir, the future Israeli Prime Minister. Israeli war crimes against the United Nations are buried in silence and amnesia.

If President Trump’s words were reprehensible (and they were indeed), they are no less so than the policies behind “the Good War” and the “Iraq War”— wars of total destruction waged on the basis of “unconditional surrender," which Washington has undertaken for more than 75 years, with no remorse from the liberals thundering anathemas at Donald Trump.

Herman Knell, To Destroy a City: Strategic Bombing and Its Consequences in World War II

Jörg Friedrich and Allison Brown, The Fire: The Bombing of Germany, 1940-1945

Tony Clifton and Catherine Leroy, God Cried (on the Israeli Bombing of Lebanon)

Michael Hoffman’s On the Contrary columns are made possible through the generosity of donors to our Truth Mission. Will you help?

The Southern Poverty Law Center is the Hate group 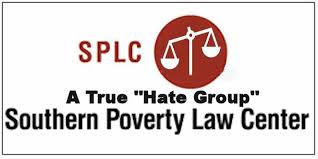 Franklin Graham, the CEO and president of the Billy Graham Evangelistic Association, counselor to President Trump, has issued a takedown of the far Left Southern Poverty Law Center’s attacks on Christian ministries as “hate” groups.

A hate group? Can you believe this – the Southern Poverty Law Center (SPLC) in Montgomery, Alabama, has labeled a number of Christian groups such as D. James Kennedy Ministries, and the Family Research Council run by my good friend Tony Perkins as ‘hate’ groups. "Why?” he asked on a Facebook post. “Simply because they hold to the teaching of God’s Word on moral issues such as homosexuality and same-sex marriage"

"They even speak disparagingly against Ayaan Hirsi Ali, a woman who was born into a Muslim family in Somalia and bravely speaks out against the dangers and oppression of women in Islam,” Graham marveled. “Because she dares to speak against what Islam has done to her and other women, she is being accused of hate speech! Incredible.

“As Kimberley Strassel said in the The Wall Street Journal, ‘If the SPLC doesn’t agree with your views, it tags you as a hater.’ The SPLC has the funding of Apple CEO Tim Cook and financial giant J.P. Morgan, and is a media favorite. Who is the real hate group here?” Graham asked.

SPLC’s designation of Christian ministries that promote traditional values as “hate groups” has played a role in two attempts at mass murder.

SPLC had demonized Scalise for promoting white supremacy and inferred “that Rep. Scalise is a so-called ‘hater.'” Hodgkinson had “liked” SPLC’s Facebook page.

(Ann Coulter writes that when he opened fire on the congressional Republican baseball practice, putting Scalise in critical condition, this "political attack was simply discarded. The media put the story of left-wing assailant James Hodgkinson in a lead casket and dropped it to the bottom of the sea”).

SPLC also was linked to domestic terror through Floyd Lee Corkins, who cited SPLC as his inspiration for his going to the Washington offices of the Family Research Council, armed with a gun, intending to kill as many people as he could. He was stopped by a security guard, who was injured.

Michael Hoffman’s afterword: This is all well and good as far as it goes, but it doesn't go far enough, at least with regard to one particular —  Rev. Graham's statement as follows: “They even speak disparagingly against Ayaan Hirsi Ali, a woman who was born into a Muslim family in Somalia and bravely speaks out against the dangers and oppression of women in Islam.”

This writer is "disparaged,” libeled and censored by Zionist and Neoconservative groups and individuals in part because I have written a textbook on the dangers and oppression of women in Orthodox Judaism, especially in connection with the misnamed, so-called "Family Purity Laws" (halachos of Niddah — cf. pp. 729-748 of Judaism Discovered).

The religion founded upon the Babylonian Talmud is far more of a threat to Christianity than the one based on the Quran. Franklin Graham, when will you and your cohort have the courage to support those of us who are defending Judaic women from Talmudic oppression?
________________