Outspoken Hollywood director says new film aims to put Adolf Hitler, who he has called an 'easy scapegoat' in the past, in his due historical context 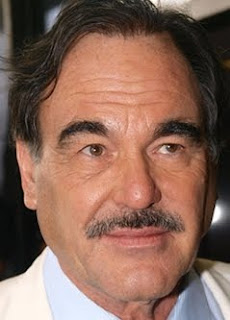 Jewish control of the media is preventing an open discussion of the Holocaust, prominent Hollywood director Oliver Stone told the Sunday Times, adding that the U.S. Jewish lobby was controlling Washington's foreign policy for years.

In the Sunday (July 25) interview, Stone reportedly said U.S. public opinion was focused on the Holocaust as a result of the "Jewish domination of the media," adding that an upcoming film of him aims to put Adolf Hitler and Soviet dictator Joseph Stalin "in context."

"There's a major lobby in the United States," Stone said, adding that "they are hard workers. They stay on top of every comment, the most powerful lobby in Washington.”

The famed Hollywood director of such films as “Platoon" and “JFK," also said that while "Hitler was a Frankenstein," there was also a “Dr. Frankenstein. German industrialists, the Americans and the British. He had a lot of support," Stone told the Sunday Times, adding that "Hitler did far more damage to the Russians than the Jewish people, 25 or 30 [million killed].”

Referring to the alleged influence of the powerful Jewish lobby on U.S. foreign policy, Stone said that Israel had distorted "United States foreign policy for years," adding he felt U.S. policy toward Iran was “horrible. Iran isn't necessarily the good guy," Stone said, insisting that Americans did not "know the full story.”

Stone's comments to the Sunday Times echo pervious remarks by the Hollywood director, regarding what he conceives as the distorted view of figures such as Adolf Hitler and Josef Stalin in U.S. media. Earlier this year, Stone, speaking at the at the Television Critics Association's semi-annual press tour in Pasadena said that "Hitler is an easy scapegoat throughout history and it's been used cheaply. He’s the product of a series of actions. It's cause and effect ... People in America don't know the connection between World War I and World War II," Stone said, adding that through his documentary work he has been able to "walk in Stalin's shoes and Hitler's shoes to understand their point of view.”

"We're going to educate our minds and liberalize them and broaden them. We want to move beyond opinions ... Go into the funding of the Nazi party. How many American corporations were involved, from GM through IBM. Hitler is just a man who could have easily been assassinated," Stone said.

The Gevurah/Right wing Republican neocons are running wild with Stone’s remarks, pointing to them as a manifestation of the Chesed/Left-wing’s incomparably perverted true nature. As part of this Left/Right charade, Mr. Stone is being cast as the unconscionable bad guy possessed of depraved indifference to a genocidal maniac (Hitler). This fire is directed by Zionist lapdogs who regard the Palestinian people as lower than dirt and cheer the Orthodox Judaic rabbinate who encourage Israeli  atrocities in Palestine.

Amid the canned outrage approved by New York and Hollywood, let’s ask, where is the outrage over Rabbi Shapira, who declared, "It is permissable to kill the Righteous among Nations even if they are not responsible for the threatening situation. If we kill a Gentile who has sinned or has violated one of the seven commandments – because we care about the commandments — there is nothing wrong with the murder.”

Where is the outrage over Goldwin Smith, Judaic Professor of Modern History at Oxford University, who opined, "We Jews regard our race as superior to all humanity, and look forward, not to its ultimate union with other races, but to its triumph over them.”

Where is the outrage over Noel Ignatiev, Harvard professor: “…The goal of abolishing the white race is on its face so desirable that some may find it hard to believe that it could incur any opposition other than from committed white supremacist…Keep bashing the dead white males, and the live ones, and the females, too, until the social construct known as the white race is destroyed. Not deconstructed, but destroyed.”

Gee, I’m sorry that I can’t be more “patriotic" and join with "Avodah Zarah" Sarah (Palin) and "Flush Limberger" and the rest of the six-pointed mobsters disguised as Jeffersonian Constitutionalists, in hurling heated epithets at Oliver Stone, when their Zionist heroes are running about advocating killing gentiles while wearing the striped pajamas of Auschwitz inmates.

This theatre of the absurd unfolds against the backdrop of  relentless focus on Islam as the "most evil religion on earth" and a threat to all the other “benign" world religions, such as the warm, fuzzy Judaism whose “holy” book says Jesus Christ is in hell being boiled in feces. With apologies to Sarah and Flush and everyone at The Weekly Standard and Fox Noose, as a Christian I dare not fail to publicly condemn and abominate the disgusting and blasphemous rabbinic religion and still hope for mercy from my Savior on Judgment Day.

Forgetting that Judaism and Islam were allies for centuries, from enforced ignorance about Judaism the faith of Islam emerges as the primary religious menace in the minds of Americans. The reaction against Oliver Stone, who merely pricked the gas bag of the monotonous Holohoax propaganda industry (and then issued the de rigueur apology for telling the truth about it), is out of all proportion because Americans do not study what Orthodox Judaism actually teaches, and care little or nothing for the Nazi-like crimes of the little Hitlers who serve the Israeli war machine while financed by US taxpayers.

Stone says Hitler was a stooge of the corporations. I say he was a stooge of deep cover Kabbalistic Judaism, as manifested in the New Age occult beliefs that were his astrological religion. Dig deeply beneath the Orthodox Judaic surface and you will excavate rabbinic admiration for Hitler as "G-d’s avenging angel" against  the majority of 20th century European Judaics who were in the process of liberating themselves from the prison house of Talmudism. Of this Oliver Stone is as ignorant as any Tea Party tippler.


Michael Hoffman is the author of Judaism Discovered. He writes from Coeur d’Alene, Idaho. 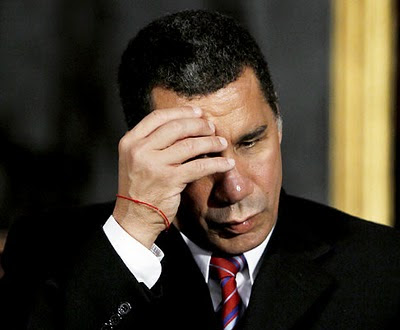 New York Governor David Paterson photographed wearing the red string talisman of Kabbalah adherents
Gov. Paterson is counting on a Madonna-blessed higher power to lead him out of the mess in Albany. The lame-duck governor has begun wearing a red string kabbalah bracelet - just like the Material Girl - in an eyebrow-raising bid to deflect ill will. "It was explained to the governor that the red string is a symbol of protection [that] wards off problems and tribulations," Paterson spokesman Morgan Hook said. "His attitude was that he'll take all the help he can get."

Paterson could be forgiven for turning to a little divine protection. In the past six months he's found himself under investigation, dumped his reelection bid as a result, and wrestled with the Legislature over the state budget. So he's apparently trying his luck with the trendy talisman favored by followers of the mystical Jewish discipline.

But unlike Madonna, Demi Moore and Britney Spears, Paterson is not yet one of the devoted, a spokesman said. "Kabbalah didn't change his life, just to be clear here," Hook said. Either way, Paterson may not be getting all the spiritual backup he hopes for - the bracelet is customarily worn on the left wrist, while the governor is seen in photos wearing it on his right.

Paterson's spiritual shift was set in motion this spring when the Catholic-raised pol visited the Queens burial site of a venerated rabbi. It was at the Union Field Cemetery in Ridgewood, housing the body of Rabbi Jacob Joseph, who died in 1902 and whose tomb has become a sacred site visited by thousands of Jews, that Paterson learned about the little red string.

Kabbalah followers believe that the $26.00 bracelet wards off the "evil eye" and brings about good fortune.

It appears to be the accessory of choice for high-profile New Yorkers facing controversy. Yankee slugger Alex Rodriguez sported a red kabbalah string on his left wrist last year when he confessed in a TV interview to using steroids. At the time, A-Rod was linked to Madonna.

Kabbalah teachings date back 4,000 years. According to the Kabbalah Centre's Web site, its "sages have taught that every human being is born with the potential for greatness. Kabbalah is the means for activating that potential."

The exact date Governor Paterson began wearing the red string isn't clear, but may have been around February when he came under scrutiny for having intervened in a domestic-violence case involving his former top aide, David Johnson.  (End quote)