Legacy media whining about investigations into their bigotry

The Karmic Consequences of Heresy-Hunting

Oozing with aristocratic entitlement and indignation, the legacy media are whining about the insolence of writers and broadcasters who have the effrontery to investigate the skeletons in their closet

By Michael Hoffman
Former reporter for the New York bureau of the Associated Press
www.RevisionistHistory.org

On the front page of the August 25 edition of the New York Times, two reporters, Kenneth P. Vogel and Jeremy W. Peters, decry a new movement by Right wing researchers among Donald Trump’s base, aimed at sleuthing into the background and statements of journalists in the employ of the legacy media

These investigations have been declared to be off-limits and “clearly not journalism.” So saith Washington Post’s Lord High Emeritus Executive Editor, Leonard Downie Jr.

He alleges that an "organized, wide-scale political effort to intentionally humiliate journalists and others who work for media outlets” is something new.

One wonders on what desert island he’s been sojourning. The censorship, doxing, boycotts and obstruction of revisionists, black nationalists and Conservative and Christian journalists don’t seem to register or even exist for media Brahmins of the upper crust.

Follow the money: the legacy media will brook no competition that harms its lucrative monopoly on news. Therefore, we dissident journalists are supposed to know our place and be content with our lot as virtually invisible. The many attempts to humiliate, libel, obstruct and remove us from Google, YouTube, Facebook, Amazon, Twitter and Instagram are of no concern to the High and Mighty in the legacy press.

"It’s one thing for Spiro Agnew to call everyone in the press ‘nattering nabobs of negativism,’ Mr. Downie said, referring to Agnew's critique of how journalists covered President Nixon. “And another thing to investigate individuals in order to embarrass them publicly and jeopardize their employment.”

This is precisely what several corporate newspaper chains, cable television news, websites, blogs and podcasts have been doing for years, including the NY Times — calling for the dismissal and loss of employment of alternative reporters who have been smeared as anti-Semitic, racist, sexist, homophobic, and so on.

A. G. Sulzberger, the publisher of The New York Times, said in a statement that exposure of shady biographical facts about Times reporters was a case of taking Trump's "campaign against a free press to a new level. They are seeking to harass and embarrass anyone affiliated with the leading news organizations that are asking tough questions and bringing uncomfortable truths to light,” Mr. Sulzberger declared.

When such tactics are used against the “leading"news organizations they are immoral and wrong. However, when the Times, Washington Post and CNN smear, intimidate and prevent alternative journalists who work for smaller online operations from “asking tough questions and bringing uncomfortable truths to light,” then it’s not at all a matter for outrage. The news aristocrats have spoken. You may now kiss their designer shoes.

“The goal of this campaign is clearly to intimidate journalists from doing their job, which includes serving as a check on power and exposing wrongdoing when it occurs. The Times will not be intimidated or silenced.”

What about journalists who seek a check on your monopoly power and wrong-doing Mr. Sulzberger? What of your newspaper’s endeavor to jeopardize our employment?

Mr. Sulzberger’s heresy-hunting NY Times has shown zero interest in defending conservative reporters who are not members of the legacy media from calumny and blacklisting.

Often the Times has been guilty of these odious tactics, which it now indignantly protests when its political rivals and business competitors employ them to deflate the reputation of the Times, and inform the public concerning the questionable character of some of its writers and editors.

In many cases Sulzberger’s newspaper has encouraged those attacks and covered up for thought police groups like Right Wing Watch and "Media Matters for America” that closely investigate and attack conservative journalists, and Sleeping Giants, which is sworn to threaten and shame any platform online that dares to host radical alternatives to politically correct dogma and revolutionary social change.

The Anti-Defamation League (ADL) is a prominent thought police group campaigning for the censorship of history books at Amazon, the silencing of black leaders like Louis Farrakhan, and of activists who are outside the established boundary of permissible opinions about Israeli settler-colonialism and the racist creed of the Babylonian Talmud. Over the years, the New York Times has been a dependable mouthpiece for the ADL and complicit in its libel and intimidation—yet the Times is horrified now that such tactics are being wielded against its own writers. Here we observe the grotesque hypocrisy of the entitled. 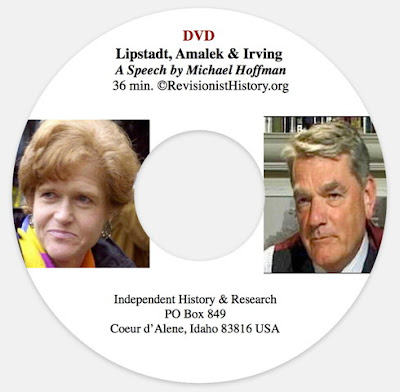 In June the heresy-hunters at Google’s YouTube removed several legitimate revisionist history videos, together with many white supremacist and hate speech videos. Having accepted without investigation Google’s deceitful description of all the videos it removed from YouTube as constituting "hate speech," the New York Times mechanically reported the entire ban in terms of taking down hate speech. Our video exposing Deborah Lipstadt’s hate speech toward historian David Irving was one of the films banned from YouTube. Consequently, our video which fulfilled a public service by advancing knowledge about the hate speech of an Establishment-revered Zionist celebrity (Lipstadt), was banned in the name of combating hate speech. The Times cooperated and was party to the masquerade. Revisionist researchers and activists are barely human in the eyes of the Times, and unworthy of the anguish and hand-wringing now being expended to defend their own hired hands from suppression and removal. This corrosive double standard undercuts Mr. Sulzberger’s protestations and reveals the corruption at the heart of his newspaper’s reporting.

Below is our note, which we e-mailed to the two NY Times employees who, in the August 25 online edition, told of the supposedly immoral and impudent move to investigate the background and statements of their distinguished fellow reporters at the legacy media’s most honored and acclaimed flagship, to which every decent American is expected to demonstrate fealty.

You wrote, "In the case of the pro-Trump network, research into journalists is being deployed for the political benefit of the White House.”

I can’t abide Trump but I consider these exposures of privileged  members of the legacy media delightful, due to the fact that said media have acquiesced in massive censorship and denial of service on Facebook, YouTube, Google and in Amazon’s censorship of historians’ dissident books. In these instances involving alternative writers and journalists who compete with the NY Times and other legacy media, there has been little or no solidarity offered by your fellow reporters and editors.

In many cases where the harassed and interdicted alternative journalists are Conservatives, there have been expressions from members of the legacy media of satisfaction at the heresy-hunting, doxing and removals.

Now, when the shoe is on the other foot, we’re supposed to believe the process of sleuthing into journalists' public and private foibles and failings is somehow an outrage against press freedom?

Freedom of the press does not begin at the gate of the legacy media. The Times, the Post, CNN etc. were the ones who first let the genie out of the bottle. You ought to deal with the karmic consequences without whining.

Better yet, work for the freedom of expression of your lumpen proletariat rivals online.

Mr. Hoffman: Since the Kabbalah is rabbinic, how would Hitler be influenced by it, as you have claimed?

Hoffman: Since the Renaissance, the syncretic religion of the western occult has conceived of the Kabbalah as a book of ancient Aryan wisdom, allegedly pre-dating rabbinic Judaism. This claim was summarized by Éliphas Levi:

“All religions have preserved the remembrance of a primitive book, written in hieroglyphs by the sages of the earliest epoch of the world. This book was the symbolical summary of primitive tradition, called subsequently Kabbalah” (cf. Gnosis, Summer, 1997, p. 64).

Éliphas Levi (1810-1875), was a black magician and “traditional Catholic” whose occultism was harbored and shielded by every notable 19th century Church authority we could locate in the annals of the pontificate of Pope Pius IX, himself a supposedly spotless paragon in the eyes of contemporary Right-wing papalists.

Levi was the arch Kabbalist situated at the gateway to the fin de siècle era in the decadent France he helped to shape. Apart from his sorcery and demonism, Levi led the attack on the Old Testament as the Word of God. Levi was one channel of the esoteric doctrine that the occult teachers of Adolf Hitler passed to him.

“A Prequel to The Occult Renaissance Church of Rome”

The following is authored by the Historical Research Department of the Nation of Islam
August 10, 2019

Jeffrey Epstein was the central figure in Mossad’s blackmail operation, by which they controlled the U.S. government. But through his own malfeasance he had put Israel at risk. That bleak outlook called into play a little-known Talmudic option that is afforded to Jews in such a predicament. In Hebrew it is called din moser (“law of the informer”) and din rodef (“law of the pursuer”), and they are concepts found in the Babylonian Talmud (Tractate Sanhedrin, 73a). These are literally contract killings ordered by Jewish authorities against a Jew that is thought to have betrayed or will betray Jewish interests. The Epstein case had now involved the highest Jewish authorities in America and put their reputations and their constituencies in league with a truly rogue character who had outlived his strategic value.Scholars have now acknowledged that the 1995 assassination of Israeli Prime Minister Yitzhak Rabin was just such a din rodef contract murder, ordered by a special court of Israeli rabbis. By conceding to the Palestinians land that many Jews believed was conferred to them by God Himself (in Genesis 15:17), Rabin was said to have betrayed the Jewish people. The assassin, rabbinical student Yigal Amir, justified his act on that very basis, telling police that he was acting on the basis of a rabbinical din rodef ruling. “Once something is a ruling, there is no longer a moral issue,” said Amir.
The Nation of Islam Research Group make a strong circumstantial case that the lynching of Leo Frank—the father of the ADL—was just such a din rodef contract murder (this is discussed in The Secret Relationship Between Blacks and Jews, Volume 3, pages 328-330).