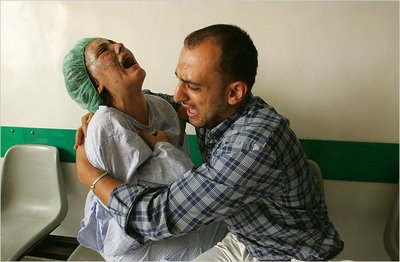 Al Hosh, Lebanon: In this photo 18-year-old Zahra al Samra (left), who was injured when the civil defense building in nearby Tyre, which also housed apartments, was bombed by Israeli on July 16, mourns for her mother, sister and other family members who were all killed in the Israeli bombing.

BEIRUT, July 18 -- Israeli warplanes bombed Lebanon for a seventh day Tuesday...More than 30 people, most of them civilians, were reported killed in Israeli airstrikes Tuesday, pushing the death toll in Lebanon to more than 250 since the clashes began Wednesday... Nine members of a family were ...killed in an airstrike that hit their home in the southern Lebanese village of Aitaroun.

After a Cabinet meeting at the White House, Bush ...made it clear that he is reluctant to call for a cease-fire while Israel is attempting to weaken Hezbollah militarily.

In a news briefing with the visiting Egyptian foreign minister, Ahmed Aboul Gheit, Gheit insisted that "a cease-fire is imperative." Condoleeza Rice said, "We all agree that it should happen...when conditions are conducive to do so."

With no sign of any diplomatic breakthrough in the offing, Israeli leaders also appeared to be in no hurry to end the offensive...

In Lebanon, Israeli raids again struck the Beirut-Damascus highway, along with gas stations, factories and a small fishing port. Smoke from fires arced over the Beirut sky, and thousands of people across Lebanon abandoned their homes to flee the violence

The New York-based advocacy group Human Rights Watch called on the Israeli military to provide details about a bombing Saturday that killed 16 people in a convoy of civilians fleeing a Lebanese village near Israel's border.


Here's what the pope was doing while the Israelis perpetrated their savage holocaust on Lebanon:

Les Combes, Italy (AP) Pope Benedict XVI is writing a book about Jesus while on holiday in the Italian Alps, the Rome daily La Republica reported Tuesday...he made an unexpected stroll across the border into Switzerland where he visited a monastery and a kennel of St. Bernard dogs. (July 18, 2006)

The Levant is now a joint US-Israeli sphere of Influence. Egypt and Jordan both have peace treaties with Israel and are non-NATO allies of the US. So they won't do more than politely disagree that Israel's wholesale destruction of Lebanon's infrastructure is useful. Turkey is part of the joint US-Israeli sphere of influence, with close military ties to both countries. Iraq is now working the American training wheels, in Bush's parlance, and although it has not formally joined the full US-Israeli sphere of influence, it has no military to speak of and basically its legs are broken. The Gulf monarchies have more or less acquiesced in the situation as well.

Syria and Iran are the only two significant dissenters. Syria is weak and isolated, having been expelled from Lebanon and having lost its Soviet patron a decade and a half ago. Iran is distant from the scene and although it might give some rockets and training to a group like Hizbullah, it does not have a history of direct military intervention in other countries anyway. The Lebanese should not hold their breath expecting succor from either quarter.

The European Powers all ceded the Levant to the US-Israeli sphere of influence a long time ago. They will not get out ahead of the US. They mostly deeply dislike the Apartheid policies of Israel in the Occupied Territories, but they also deeply dislike and fear Hamas and Hizbullah, having their own large Muslim populations that they don't want radicalized.

They probably realize, as David Clark wrote yesterday that Israel's policies are antithetical to the interests of Western governments. But they decline to challenge the US-Israeli sphere of influence because they believe it would cause them even more trouble to do so.

So, basically, the Palestinians and the Lebanese are screwed. The Lebanese might not have been in such a vulnerable situation if they had not kicked out the Syrians, though the Syrians were there in 1982 the last time Israel invaded.

That is why there is terrorism in the Middle East. The Israeli occupation of the Occupied Territories has been barbaric and intolerable. It produced Hamas. The Israeli occupation of South Lebanon was barbaric and intolerable. It produced Hizbullah. A wise Great Power can walk back such bad situations, as the US did in Europe and Japan after World War II. Unwise Powers get stuck with the Tar Baby.

The Isarelis not only control 90% of all newspapers and media so they can say and repeat over and over to every body that they are "poor me" and every body else is a Terrorist. They still land, place people in concentration camps but get people to give them money for what the Nazis did, while in reality they are a Nazi state.

The arabs have too much pain and their armies wont defeat the beasts.

The only way out is to do as Ghandi
did to the British....

Englas had to run so fast and hard that the pain and embarrasement and the fury they got made them create
Pakistan and Israel to make sure PAIN was left behind.

as for the Americans...