A few salient facts about rabbinic circumcision
by Michael Hoffman

Metzitzah b’peh: (sucking on the circumcised baby's penis after a Talmudic circumcision) is not anywhere commanded by the Biblical law of God ("Torah"). This homosexual molestation of infants via metzitzah b'peh is commanded only by the man-made hahalcha of the Talmud (BT Shabbat 19:2), and post-Talmudic rabbinic authorities.  There is no warrant in the Bible for homosexual molestation of infants. Metzitzah b'peh was formerly the way all Judaic infants were circumcised for more than a thousand years. In other words, all Talmudic babies were molested as infants throughout most of western history, and many tens of thousands still are today. All "Christians" who support Orthodox Judaism and present it as allies in the conservative struggle for "family values" are complicit in the institutionalized metzitzah b'peh molestation of innocent and helpless Judaic baby boys. For more information on this abominable sin cf. Judaism Discovered.

The leading association for mohelim who practice a risky oral blood suctioning technique in their circumcisions has vowed not to cooperate with New York City’s new health regulations governing use of the technique, known as metzitzah b’peh.

Brooklyn mohel Rabbi Avrohom Cohn, chairman of the American Board of Ritual Circumcision, said his group would not have parents sign waiver forms, which the city is now requiring as a condition for performing metzitzah b’peh.

“He’s the mayor of the biggest city in the world, but I’m not going to listen to him,” Cohn said, referring to New York City Mayor Michael Bloomberg, who has strongly backed the new rules. “I have another mayor, the almighty, and I will do it his way.”

The regulation, put out by the city’s board of health, requires parents to provide a signed consent form to a mohel before that mohel may perform metzitzah b’peh. The technique, in which the mohel uses his mouth to suction off blood from around a baby’s penis after cutting the infant’s foreskin, has been found to transmit herpes simplex virus, which can cause serious injury, and even death, to infants.

READ THE REST OF THE ARTICLE HERE:
http://forward.com/articles/170149/orthodox-rabbis-vow-to-resist-consent-forms-for-co/?p=all

"..."the servitude of animalistic black Africans should be perpetual.”

Israeli Health Minister director general instructs all gynecologists in Israel's four health maintenance organizations not to inject women with long-acting contraceptive Depo-Provera if they do not understand ramifications of treatment.

A government official has for the first time acknowledged the practice of injecting women of Ethiopian origin with the long-acting contraceptive Depo-Provera.

Health Ministry Director General Prof. Ron Gamzu has instructed the four health maintenance organizations to stop the practice as a matter of course.

The ministry and other state agencies had previously denied knowledge or responsibility for the practice, which was first reported five years ago.

Gamzu’s letter instructs all gynecologists in the HMOs "not to renew prescriptions for Depo-Provera for women of Ethiopian origin if for any reason there is concern that they might not understand the ramifications of the treatment.” He also instructed physicians to avail themselves of translators if need be.

Gamzu’s letter came in response to a letter from Sharona Eliahu-Chai of the Association of Civil Rights in Israel, representing several women’s rights and Ethiopian immigrants’ groups. The letter demanded the injections cease immediately and that an investigation be launched into the practice.

About six weeks ago, on an Educational Television program, journalist Gal Gabbay revealed the results of interviews with 35 Ethiopian immigrants. The women’s testimony could help explain the almost 50-percent decline over the past 10 years in the birth rate of Israel’s Ethiopian community.

According to the program, while the women were still in transit camps in Ethiopia they were sometimes intimidated or threatened into taking the injection. “They told us they are inoculations,” said one of the women interviewed. “They told us people who frequently give birth suffer. We took it every three months. We said we didn’t want to.”

Discover the suppressed history of how a den of thieves robbed the followers of Christ of their patrimony:
Read: Usury in Christendom: The Mortal Sin that Was and Now is Not

No evidence of Iranian nuclear weapons 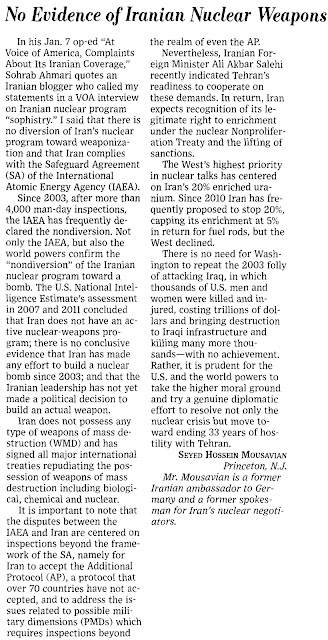 Now being mailed to subscribers

"Martin Luther and Zinskauf": The German Reformation in the Context of the Struggle over Usury.”

This study was intended for inclusion in Hoffman's book Usury in Christendom and is now published for the first time.

"The Good War and the Holocaust Against the Germans" (an in-depth review of the book, Orderly and Humane by R.M. Douglas).

"The Gungrabbers and Sandy Hook." An analysis of the latest incremental step in the goal of gradually disarming the American people.

"The Budget Deficit at Home: Enslaving America with Personal Debt"

Plus: Judaism's Cryptic Mockery of Obama. Geronimo's Last Stand. Why the Post Office is pricing itself out of existence. Jesus in the Talmud. Mass protest marches you may have missed; and more.

To purchase this issue alone, or a subscription, click here: http://revisionisthistorystore.blogspot.com/

How parasitic thieves gain wealth and power through usury

Here is but one instance of the usury by which immense wealth ($654 million) is gained by parasitic thieves who manipulate the economy for their benefit. These shylocks do not farm, manufacture or produce anything, yet they reap immense profits. Through the power and respectability their money exerts, they control our world.

Usury in Christendom: The Mortal Sin that Was and Now is Not

BANNED BY YOUTUBE AND REMOVED AUGUST 26, 2019
Historian Michael Hoffman gives a talk in a private home concerning the thesis of his new book, Usury in Christendom: The Mortal Sin that Was and Now is Not.

This video is 34 minutes and covers some of the main points that Hoffman is most passionate about, including his belief that we will not begin to restore God’s Church or heal western society of its many ills, until we begin to obey the law of God in the crucial matter of the mortal sin of charging interest on debt.

Currently the world is ruled by the Money Power -- by our love of money as that ungodly lust is made manifest by the demonic engine of compound interest -- money breeding money -- a depraved act of human perversity that leads to every other form of iniquity, criminal politics and crimes against nature.

This broadcast is available for purchase as a DVD here.