The Hoax of Israeli-Hezbollah Parity 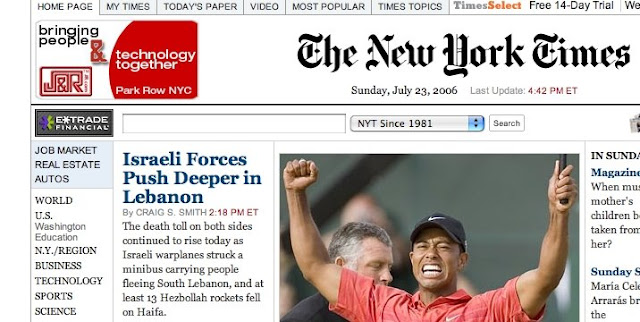 "Israel," the fifth largest military power on earth, has been pounding Lebanon into the stone age (shades of Curtis LeMay over Tokyo and his "strategy" for Vietnam), and here is the New York Times mythology abut the Israeli war on the people of Lebanon (as of July 23, 2006 4:42 p.m. EDST):

"The death toll on both sides continued to rise today as Israeli warplanes struck a minibus carrying people fleeing South Lebanon, and at least 13 Hezbollah rockets fell on Haifa.”

What a stinking Zionist-media farce! Lebanese casualties are running at the Nazi/French resistance ratio of 10-to-1, but the  Times describes it as if equally matched forces were battling it out.

The Babylonian Talmud (Baba Kamma 113a) teaches Judaics to prevaricate and deceive. Most Judaics have not formally studied the Talmud, but the Talmudic ideology is distilled through Zionism and this is reflected in the "news reporting" about Lebanon of the Zionist New York Times.

Does a war need to have equal casualties...
That's the whole point of winning a war..is to have less casualties...

Was there ever an official "declaration of war" on Lebanon by Israel? Or is this another "pre-emptive strike" the Bush regime made legitimate when he made the decision to invade Iraq? Or is this part of the "never-ending story" of "the war on terrorism". If it is the latter then they are fighting this alleged terrorism only with a more sophisticated, although extremely brutal, form of terrorism: "Collective Punishment"; I guess this is what they choose to have the media call it so the people will see it as that. They understand the Group Mind and the power of semantics but at this point I think they are underestimating the Power of God, or karma, or whatever you want to call it. Unless they do indeed consider themselves and the rest of the Jewish race as God.

"By Deception Thou Shalt Make War" has never been as clearly out in the open as it is now. And the cowans are still being deceived.

Just as the Nazi regime caused many Germans to feel ashamed of their heritage,(with alot of help from Hollywood,the media,etc..)I would begin to feel ashamed of my Jewish heritage if I wasn't strong enough to be an individual and not let some evil men ruin my personal self-view. And I would hope the same for any other person, no matter their race, ethnicity, or creed. There are evil men ruining many religions and nations and it is a shame they have such power they can influence millions of individual persons in such a way that they become ashamed of their race, nationality, or religion.

I do not practice Judaism or any other religion but I do believe in God or a "Higher Power". The rabbis are running rampant, indulging in deceit and like the Catholic Church scandal involving the molestation of young boys made the membership of the Church decline, the same could very well happen with some of the different sects of Judaism. I admit I do not know much about either religion but I would hope that the people of Israel who are practicing Jews can break free from this spell which the High Priests seemed to have casted upon them and even upon American Gentiles.