Satan in the Kabbalah

Satan in the Kabbalah
The Documentary Facts

Re: The Kabbalistic Zohar

Is the word “Satan” actually used? Can’t find any translation online.  Send me the Hebrew word.

“Israel must make sacrifices to Satan so that he will leave Israel unmolested.”

Sent from my iPad

The words “Satan” and "demonic powers” are in fact used interchangeably in the Zohar.

For example, in the general context of Zohar 2:33a, which concerns the necessity of Israel making offerings to Satan, it is written:

“The demonic powers should be given a portion, occupying and assuaging them, so that they will not disturb Israel’s intimacy with God.”
— The Zohar: The Pritzker Edition (Stanford University Press, 2007), vol. 4, p. 140.

Referring to a sacrifice of a goat in the same passage (Zohar 2:33a), it is written, “…this goat is intended to preoccupy Satan, leaving Israel alone with God.”

As in many pagan religions, according to Kabbalistic dogma, the demons must be propitiated with blood sacrifice so that the life of the people of Israel may continue unmolested.

When there are severe disturbances in superstitious societies such as these, they result in ever more propitiations to Satan, so as to restore peace and tranquility. When Hernando Cortez and the Catholic Conquistadors were closing in on the Aztec capital of Mexico City in 1521, the Aztec priests began frenetically sacrificing ever more victims on their blood-smoking pyramid.

Orthodox Judaism, from the evidence in the Kabbalah’s Book of Zohar, is not appreciably different from the Aztecs, although we are not suggesting that Orthodox Judaism endorses contemporary human sacrifice, apart from the numerous Israeli wars against the Palestinian and Lebanese people. Zionism however, differs markedly from traditional Kabbalism and Talmudism.

1. It is an unfortunate fact that the authenticated text of the ancient Zohar insinuates a certain urgency to the sacrifice of goyim that Israel must make to Satan, in that, where no such sacrifice is made, it is believed that Satan will sacrifice rabbis. The Zohar states that this occurred to ten rabbis who were killed in the second century (A.D).

2. The Zohar is the source of the Gnostic, New Age and neo-Nazi belief that Satan and the God of the Bible are the same person.

In many passages in the Zohar, the conflation of Yahweh and Satan is difficult to miss.

For instance, the Book of Genesis testifies that the Biblical patriarch Joseph was beloved by God, while the Zohar states that for the crime of kidnapping and selling Joseph, which Joseph’s brothers had committed, it was Satan who sought retribution against Joseph’s enemies (2:33a).

To refute the nonsensical tale circulating among “evangelical Christians" that Orthodox Judaism is not Kabbalistic and that the Kabbalah is actually heretical and not part of Orthodox Judaism, we refer the reader to one of the largest and most politically influential branches of Orthodox Judaism in the United States: Chabad-Lubavitch, which proudly operates “Kabbalah Online.”

So-called “Christians” who cooperate with the Orthodox rabbinate do so in defiance of II Corinthians 6:14. They are complicit in the diabolism of the Zohar and cognate sacred Kabbalistic texts.

How could any genuine follower of Jesus Christ countenance such involvement? Yet it is ongoing and massive. Hence, evangelical Churchianity is itself demonic, no less than the popes of the Church of Rome who, as we have documented, submitted to the Kabbalistic gnosis beginning more than five hundred years ago, and have maintained their fealty from then until now.

There is no denying the pivotal role of the Kabbalah and its principal book The Zohar in much of Orthodox Judaism.

Furthermore, every U.S. Congress since the administration of Ronald Reagan, has officially marked the birthday of the Kabbalist Menachem Mendel Schneerson — Chabad-Lubavitch's last Grand Rabbi— as “Education Day USA,” a Congressional decree which is intended to lay the legal groundwork for officially promulgating in the United States the Seven “Noahide” Laws of the Chabad, and of Orthodox Judaism in general.

As we assured The Saker in his interview with this writer, the Noahide Laws require the execution of anyone who engages in Avodah zara, i.e. “idol worship.” Orthodox Judaism declares Jesus Christ an idol, and Christians as idol worshippers. The Right-wing Church-goers who follow Pence, Pompeo and Ben Shapiro cooperate in the suicide of Christianity. They worship their would-be executioners. This is diabolic disorientation.

These facts are denied by people who haven’t done the research and prefer to parrot the myths with which their heads are stuffed. The revisionist historian has a different vocation.


Michael's's blog, The Truth About the Talmud is published as a public service for the liberation of all people, Judaic as well as gentile.


Please donate to ensure the continuation of our Truth Mission

Michael Hoffman’s books are available here and here, as well as at this link 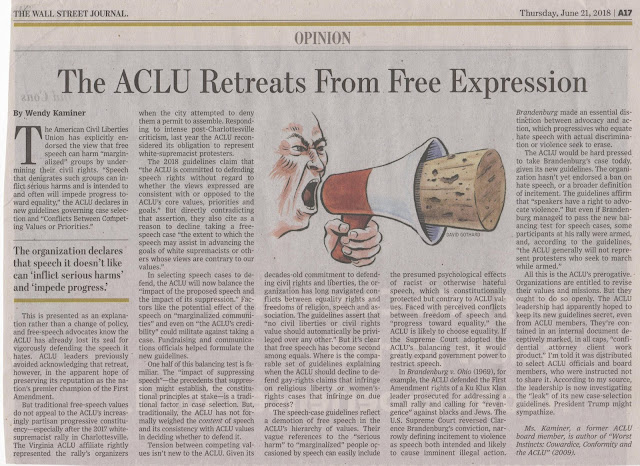 "The American Civil Liberties Union has explicitly endorsed the view that free speech can harm ‘marginalized' groups by undermining their civil rights. 'Speech that denigrates such groups can inflict serious harms and is intended to and often will impede progress toward equality,' the ACLU declares in new guidelines governing case selection and Conflicts Between Competing Values or Priorities.

“...The speech-case guidelines reflect a demotion of free speech in the ACLU’s hierarchy of values. Their vague references to the 'serious harm' to ‘marginalized' people occasioned by speech can easily include the presumed psychological effects of racist or otherwise hateful speech, which is constitutionally protected but contrary to ACLU values. Faced with perceived conflicts between freedom of speech and 'progress toward equality,' the ACLU is likely to choose equality. If the Supreme Court adopted the ACLU’s balancing test, it would greatly expand government power to restrict speech...

"The ACLU leadership had apparently hoped to keep its new guidelines secret, even from ACLU members. They’re contained in an internal document deceptively marked, in all caps, “confidential attorney client work product.” I’m told it was distributed to select ACLU officials and board members, who were instructed not to share it...”

The California Republican Party has distanced itself from a candidate running under its party banner over charges of anti-Semitism for the second time this year.  John Fitzgerald is the only Republican running in the heavily-Democratic 11th District, northeast of Oakland.

His campaign website includes false claims that 9% of U.S. government officials are dual citizens of Israel and that Jews played a “prominent role” in the African slave trade, and celebrates a “courageous” elderly German woman who was sentenced to two years in prison for denying the Holocaust.

“Why is the holocaust the ONLY historical issue that cannot be questioned without fear of fines and/or imprisonment in eighteen countries–and counting– throughout the world?” Fitzgerald wrote on May 16.

The website also harshly criticizes Israel’s response to protests on the Gaza border.

“As always, California Republicans reject anti-Semitism, and all forms of religious bigotry, in the harshest terms possible. We reject John Fitzgerald’s campaign and encourage all voters to do the same.”

“We absolutely and unequivocally condemn John Fitzgerald and his campaign for Congress,” added Republican Jewish Coalition executive director Matt Brooks. “His anti-Semitic views have no place in our political system, and especially not in our Republican party. Fitzgerald clearly has no grasp of the facts when it comes to the Jewish people, Israel and our nation’s relationship with the only democracy in the Middle East, and history in general.”

Fitzgerald’s website does not seem to show a response to the state party’s statement, but it does include a rebuttal to similar accusations of anti-Semitism from former state party chair Ron Nehring.

“I am not an anti-Semite by any means, I am strictly an honest and ethical person who has the temerity to state fact: Israel has an absolute stranglehold over U.S. foreign-policy, and has for decades, at the expense and peril of our soldiers and America’s best interests,” Fitzgerald wrote... 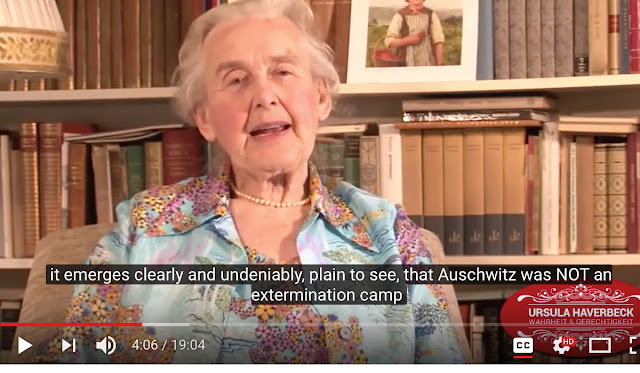 The Zionist newspaper Forward inserts an editorial opinion —  in what is supposed to be an objective news report —  that it is a “false claim” to state that Judaic persons played a prominent role in the African slave trade. Actually, this fact is demonstrably true, as documented in  the magisterial two-volume history, The Secret Relationship Between Blacks and Jews.

Moreover, if Ursula Haverbeck, who has been demonized by the western media as “the Nazi Grandma,” is not courageous for questioning the existence of homicidal gas chambers in Auschwitz, for which the punishment in Zionist Germany is five years’ imprisonment, then courage has a new meaning only Orwell would recognize.

Name-calling, libel, censorship, inquisition and the dungeon are all that the Zionists and their lapdogs in the government of Germany and the corporate media possess as a means for upholding the holy execution gas chamber idol.  That an 89-year-old woman was sent to prison this month for merely asking probing questions about one detail of the the alleged history of World War II, is a shame and a disgrace that ought to be recognized as such by even half-sane persons. But sanity is a commodity in short supply in our world today.