Martin Luther's revolt against the Church of Rome gained firm purchase among the German people in part due to the perception that the papacy was traditionally biased toward the German nation.

Here is an excerpt from an interview with Eco published Sept. 28 in La Nacion, one of the main Argentinean dailies based in Buenos Aires:

"Responding to a question as to whether he was surprised that the pope, for the first time in more than a millennium, was not a European, Eco recalled that 'it (the papacy) went out of Italy' with the election of Karol Wojtyla (John Paul II) in 1978, and prior to that the last non-Italian pope was Hadrian V from Utrecht in 1552.  “When it happened with Wojtyla it was something new that showed that the Church was no longer an Italian power against the Germanic empire, as it had been in the previous centuries, it was something universal."

Now being mailed to subscribers -- Revisionist History Newsletter no. 68 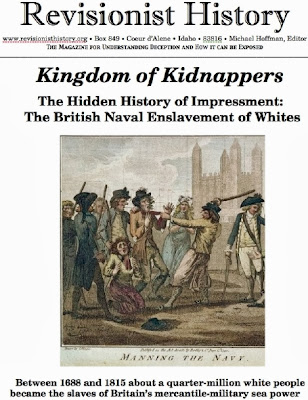 Also in this issue: NSA Surveillance — Treason to the 4th, 5th and 7 Amendments to the Bill of Rights of the U.S. Constitution. Plus: Machiavelli’s Ideology of Command; Washington Navy Yard Shootings; Wall Street Pays Petraeus; Hoffman’s “Usury” book reviewed by Economist Anthony Santelli, and more.


Subscribe to Revisionist History and start your subscription with this issue. Or order this issue "Kingdom of Kidnappers" by itself

In an interview filled with what we can only term theological gobbledegook with nary a reference to the Bible, but loads of mystical vertiginous malarkey, Francis the pope of Rome has come out with unprecedented cold-hearted malice toward defenseless, unborn children.

Let us anticipate the response of his defenders and rejoin in advance: no, the pope was not quoted out of context, or misquoted. We’re going to give you his quote in context; and it is said he was handed a copy of his interview and allowed to check and edit it before its publication in the Jesuit magazine, America.

Here are the pontiff’s documented words, in context. First on homosexuality:

“We need to proclaim the Gospel on every street corner,” the pope says, “preaching the good news of the kingdom and healing, even with our preaching, every kind of disease and wound. In Buenos Aires I used to receive letters from homosexual persons who are ‘socially wounded’ because they tell me that they feel like the church has always condemned them. But the church does not want to do this. During the return flight from Rio de Janeiro I said that if a homosexual person is of good will and is in search of God, I am no one to judge. By saying this, I said what the catechism says. Religion has the right to express its opinion in the service of the people, but God in creation has set us free: it is not possible to interfere spiritually in the life of a person.

“A person once asked me, in a provocative manner, if I approved of homosexuality. I replied with another question: ‘Tell me: when God looks at a gay person, does he endorse the existence of this person with love, or reject and condemn this person?’ We must always consider the person. Here we enter into the mystery of the human being. In life, God accompanies persons, and we must accompany them, starting from their situation. It is necessary to accompany them with mercy. When that happens, the Holy Spirit inspires the priest to say the right thing.” (End quote).

Where in the catechism does it say the pontiff has no right to judge a homosexual?

What is this pope babbling about when he says, “...it is not possible to interfere spiritually in the life of a person”?

Furthermore, what is “gay” about sodomy? If God, as the pope claims, “endorses the existence” of a person who practices sodomy, how could God ever send that person to hell?

Nowhere does the pope mention a little something known as sin. He offers no reasons for the sodomite to stop sodomizing. After all, God Himself “endorses the existence” of the sodomite. So why not continue in one’s sins? What is the impetus for change?

The pontiff’s documented words, in context, on abortion and contraception:

"We cannot insist only on issues related to abortion, gay marriage and the use of contraceptive methods. This is not possible. I have not spoken much about these things, and I was reprimanded for that. But when we speak about these issues, we have to talk about them in a context. The teaching of the church, for that matter, is clear and I am a son of the church, but it is not necessary to talk about these issues all the time...The church’s pastoral ministry cannot be obsessed with the transmission of a disjointed multitude of doctrines to be imposed insistently...We have to find a new balance; otherwise even the moral edifice of the church is likely to fall like a house of cards, losing the freshness and fragrance of the Gospel.”  (End quote).

Perhaps someone should tell the pope it is not necessary for the post-Vatican II Church to insist only on issues related to the Nazi “Holocaust," anti-semitism and the defense of Talmudic Judaism as possessing an unbroken covenant with God. "We have to find a new balance." Does the pope agree? Would he be caught dead saying that the pastoral ministry cannot be “obsessed” with the Nazi “Holocaust”?

We don't believe, short of a divine miracle, Francis would ever make such a statement, for unlike the dehumanized and marginalized unborn children awaiting the executioner's invasion of their mother's womb, the Nazi "Holocaust" lobby has enormous power on earth. The victims of the abortion holocaust have no such lobby with comparable power on earth.

Let us also not forget that this coffin-rider who calls himself pope is declaring that too much has been said against birth control (contraception). The people who brought the Gospel to the world, who inhabit the nations of Britain, Ireland, Europe, Canada, Australia and the United States, are self-extinguishing due to contraception being winked at by their religious leaders — and now it is minimized by the pope himself. This is incredible. It is totally revolutionary. Even the pope of Vatican II, Paul VI, devoted himself to composing the encyclical Humane Vitae, closing the door forever on artificial contraception. But Francis declares, "We have to find a new balance.” Between what, life and death? (Rev. 3:15).

According to fake prophecies cooked up during the Renaissance and attributed to the medieval St. Malachy, the current Pope Francis is the last pontiff, dubbed, in that phony prophecy, “Peter Romanus.”

We propose a new name for him, Diabolus Romanus.


Hoffman is the author of Usury in Christendom: The Mortal Sin that Was and Now is Not.

"Forgotten or ignored by the west are the Christian men and women of Russia who prayed, suffered and died for today's free and united Russia. Last century they were attacked by Hell itself yet they endured and rebuilt Christ's Church. Over 58 Million were killed in Communist Russia but the Faith survived. It is one of the greatest miracles in world history.

The western media prefers to shriek like spoiled brats against Putin. "Evil dictator!" they shout, while they themselves have rejected the Holy Spirit and proudly wear the seal of the Antichrist.

They laugh but God is not mocked. Christ is Victorious in Russia where homosexuality is still a sin; blasphemy a crime; where crosses and holy images are in public view. A renewed faith in Christ our King has become our fortress. This is the wall Putin stands on and the wall that will cause Obama's fall.”

Email ThisBlogThis!Share to TwitterShare to FacebookShare to Pinterest
Labels: Holy Mother Russia, homosexuality is still a sin, the seal of the Antichrist, Vladimir Putin

Goldhagen has published a delusional book of 485 pages, The Devil that Never Dies  ("antisemitism" is the devil), and Julius is afraid that it is so bad it will embarrass the Zionist thought police; ergo, he reveals Goldhagen's fraudulent quotes and dishes other dirt on Goldhagen and his book, which Julius terms "truly ludicrous."

If you can beg, borrow or buy a copy of today's Wall Street Journal, I would say, do so.

Internecine warfare among the enemies of truth is a delightful spectacle.

P.S. Here is my own critique (at Amazon.com) of a book by Anthony Julius himself:

To receive news briefs and special offers by e-mail via "The Hoffman Wire," send an e-mail to hoffman[at]revisionisthistory.org with the words "Subscribe Hoffman Wire" in the subject header.
Posted by Michael Hoffman at 9/13/2013 07:50:00 AM No comments:

Saul Holiff is the subject of his son Jonathan’s film documentary, “My Father and the Man in Black,” opening in New York and Los Angeles September 6. The Man in Black is of course country music singer Johnny Cash. Saul was associated with the superstar for 17 years, and for 13 of those as his manager. The movie is based on telephone conversations with Cash which the elder Holiff secretly recorded, unknown to the singer or his family.

Here is a portion of an interview with Jonathan Holiff concerning Saul Holiff which was conducted by Curt Schleier and published in the Sept. 3 edition of the Jewish Daily Forward.

Schleier: But finally June Carter Cash said something that broke the camel’s back. Was she an anti-Semite?

Jonathan Holiff: I can’t say that she was. But when John (Johnny Cash) started working with (the Rev. Billy) Graham she asked my Dad if he had some problem with Jesus and was only interested in money.

My father said, “I consider that remark anti-Semitic. I should not be expected to attend shows I did not book. I’m giving my notice.”

He’d quit Johnny four or five times before. He’s the only one to quit a superstar. In Hollywood we would sooner convert to Scientology than walk away from $1 million a year. This is something I respect about him...

His integrity was paramount and when Johnny tried to convert him to Christianity my father couldn’t take it any more. He walked away from all that money and retired at age 49 never to work again.

Sample letter to your Senator or Rep. opposing Obama attack on Syria

Next month the US treasury is slated to run out of money.

Some Republicans tell us there is little funding available for Social Security or health care.

If you choose to approve Mr. Obama’s intention to bomb Syria, please reveal the estimated cost of a cruise missile — or other attack — to taxpayers, and explain how America can afford to be world policeman when we have a sequester and a severe budget shortfall?

I would like our bridges, roads, and schools repaired and built, and social security and health care for Americans budgeted, before we intervene in yet another Muslim civil war on the other side of the world.