The "Gay Lobby” has won the Vatican

"I don't know. I formulate no hypothesis on this." -- Cardinal Hummes

Do you remember Cardinal Hummes? He is the Pope's greatest friend in the College of Cardinals, the Franciscan who inspired the papal name "Francis," the cardinal who was by the Pope's side in the loggia in the memorable evening of the pope's election.  Cardinal Hummes is Archbishop Emeritus of Sao Paulo, Brazil, and former Prefect of the Congregation for the Clergy.

Hummes granted an extensive interview on July 27, 2014 to the "Zero Hora" (ZH) newspaper in his native Brazil, and his reply on sodomite "marriages" is here for all the world to see the extent to which the homosexual mafia has infiltrated the highest echelon of the Church of Rome.

Zero Hora newspaper: "If Jesus were alive today, would he be in favor of gay marriage?"

Cardinal Hummes: "I don't know. I formulate no hypothesis on this. Who must answer this is the Church in its entirety. We must take care not to raise issues individually, because this ends up creating more difficulties for us to reach a valid conclusion. I think we must get together, listen to people, those who have an interest, the bishops. It is the Church that must indicate the ways, and there must be a way for all" (end quote).

Michael Hoffman's Afterword: These are weasel words from a "Prince of the Church" and top aide to Pope Francis. Cardinal Hummes doesn't know whether Jesus would be in favor of the "marriage" of two sodomites. Hummes' mentality reflects diabolic confusion, along with a radical agnosticism with regard to what Christ defined and taught -- that marriage is between a man and a woman (Matthew 19: 4-5).

The "Gay Lobby" won (in the Vatican as well) 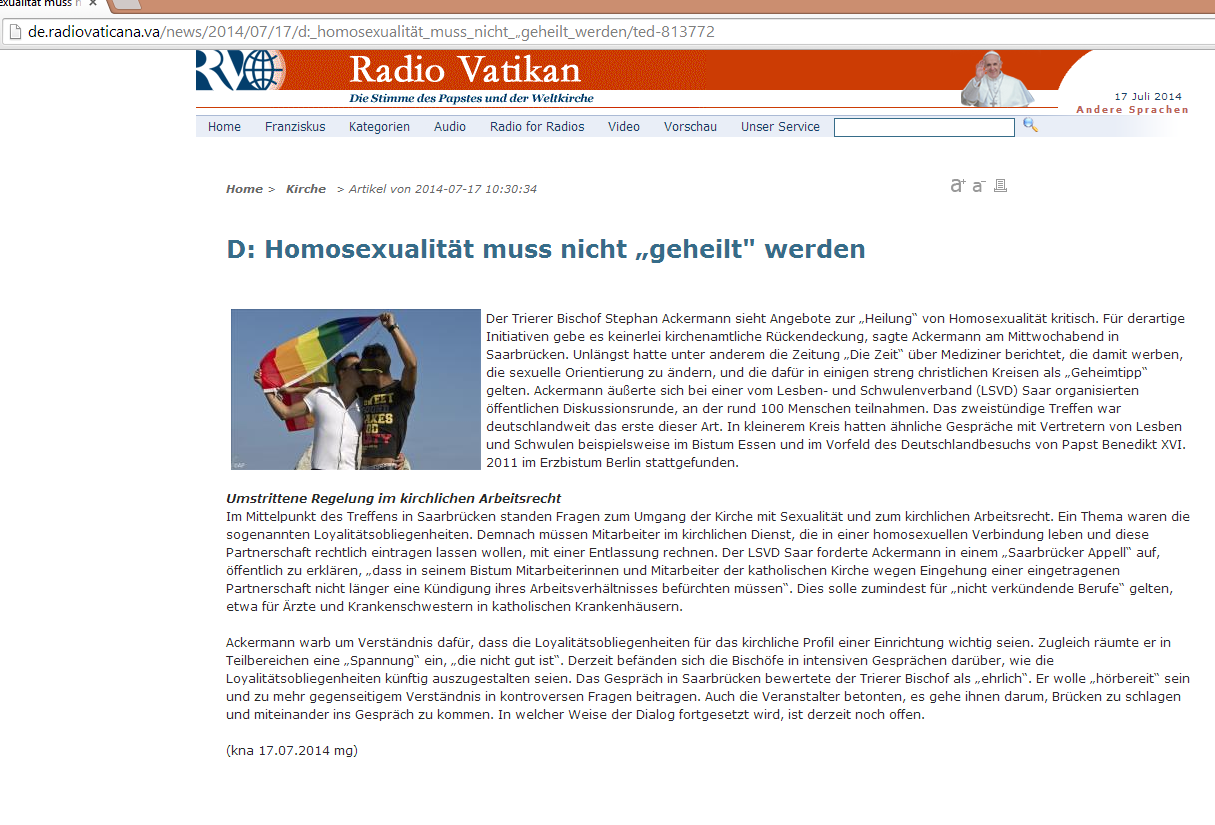 Well, it seems the takeover  is complete.
This from Vatican Radio:

Stephan Ackermann, bishop of Trier, is critical of proposals to “heal” homosexuality. There is no ecclesial backing for such initiatives, Ackermann said Wednesday evening in Saabrücken.

No, the bishop's comment is not the issue, just another symptom of what Fr. Dariusz Oko called the "Homoheresy". The problem is how this was presented in the official radio of the Holy See, Vatican Radio (Radio Vaticana): shame has been utterly and completely lost.
What is the point of having a radio, a website, a communications team, if this is what comes out of it? What is the point of it all, if the Church's most senior communications source has become a completely worldly, mundane, immorality-promoting institution?

The blood of the martyrs of Uganda rises from the earth: they did not die for nothing. They refused to submit to sodomy and forced immorality, thinking of the Kingdom of Our Lord Jesus Christ. But they did not die for this accursed legion that took over much of the Church.


"Be not deceived: God is not mocked -
for whatever a man sows, that shall he also reap."
Galatians 6:7

* Translation of an excerpt from the article:


Stephan Ackermann, (Roman Catholic) bishop of Trier, is critical of proposals to “heal” homosexuality. There is no ecclesial backing for such initiatives, Ackermann said Wednesday evening in Saabrücken. Not long ago the periodical “Die Zeit” included a report on doctors who advertise being able to change one’s sexual orientation, an approach regarded as a “secret trick” in strongly Christian circles. Ackermann made his statements at roundtable discussion which was organized by the Lesbian and Gay Union of Saar (LSVD). About one hundred persons were in attendance. The two-hour meeting was the first of its kind in Germany. Similar discussions had taken place, on a smaller scale, with gay and lesbian representatives, for example in the diocese of Essen and in the archdiocese of Berlin for the run-up to Pope Benedict XVI’s visit to Germany in 2011.

For further research: "Huge Homosexual Underground" inside the Church of Rome