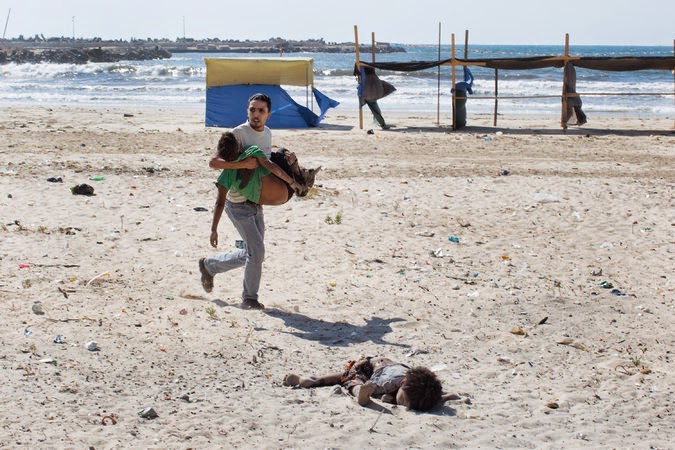 GAZA CITY — Four young Palestinian boys were killed Wednesday when two explosions hit a jetty and beach where they were playing at the fishing port of Gaza City, an area that had been considered relatively safe from the intense Israeli bombing campaign of the past nine days.

The Israel Defense Forces acknowledged that it had struck the area. “Based on preliminary results, the target of this strike was Hamas terrorist operatives,” the I.D.F. said in a statement. “The reported civilian casualties from this strike are a tragic outcome.”

The four boys were cousins in an extended family of fishermen who kept their boats at the port.

The Israeli military has been hitting Gaza with bombs and missiles for more than a week, aiming to stop Hamas, the group that controls the territory, and other militants from firing rockets and other munitions into Israel. The first explosion left a small shack burning on the jetty. Several boys could be seen fleeing along the beach. About 30 seconds later came the second blast, and when the dust cleared, three figures lay motionless on the sand. One had most of a leg blown off, his body charred; a few yards away lay a smaller one with curly hair. The two explosions were about 30 seconds apart.

Men came running and scooped up three bodies. A fourth was found in the charred ruins of the shack on the jetty. A grown man, wounded, called for help from inside an outdoor beach cafe, and he too was carried away.

Israel’s military says it has taken extensive precautions to avoid killing civilians. But it has acknowledged, according to Israel Radio, that about half the people in Gaza killed so far were “not involved in terrorism.” Human Rights Watch issued a statement on Wednesday decrying the civilian casualties and demanding that Israel “end unlawful attacks that do not target military objectives.”

A running count kept by United Nations officials shows that of the more than 200 Palestinians who have been killed so far, about 75 percent have been civilians, including more than three dozen children. One Israeli has been killed.

Hamas and other militant groups have fired more than 1,000 rockets into Israel since simmering hostilities erupted into military confrontation on July 8. Most of the Gaza rockets have fallen in open ground in Israel or were destroyed by Israel’s Iron Dome interception system. For its part, Israel has struck houses, offices and farmland in the Gaza Strip with airstrikes, missiles fired from Apache helicopters and shelling from naval gunboats. 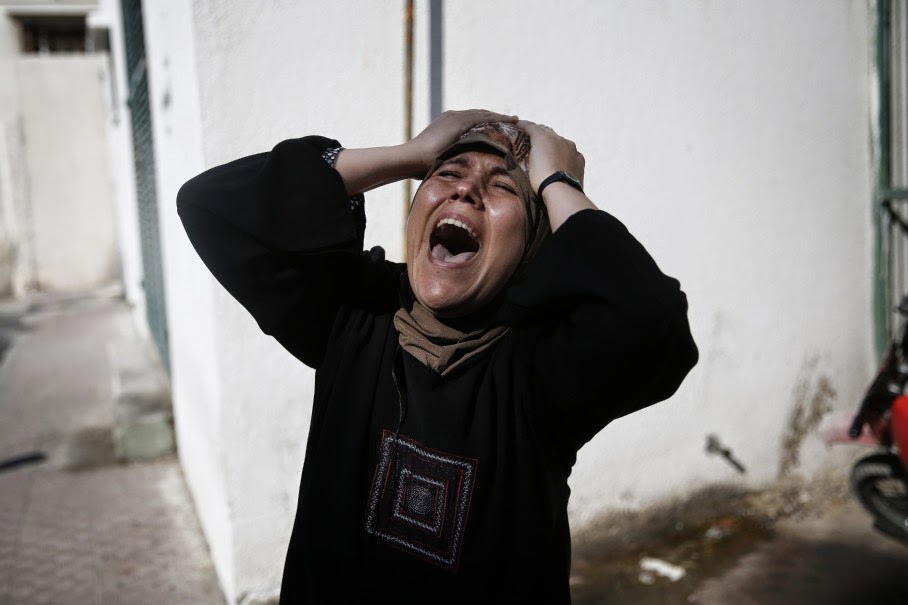 An Israeli military spokesman, Motti Almoz, told Israel’s Channel 10 that Israeli forces had fired at “a target near the sea” on Wednesday and that the details were still under review. Alon Ben-David, a senior military affairs journalist with extensive Israeli military sources, said information he had seen indicated that the military had identified the beach shack as belonging to Hamas and fired at it.

Mr. Ben-David speculated that the second blast had been aimed at the children running away, who might have been mistaken for militants. But he added that given the military’s technologically advanced surveillance equipment, “it is a little hard for me to understand this, because the images show that the figures are children.”

The boys were part of the Bakr family, according to relatives who gathered outside the family’s apartment building, wailing and crying. One woman cursed both Israel and Hamas, and another quietly noted that Hamas had killed 10 members of the family in factional infighting.

...Like many Gaza children from large families, the cousins were inseparable and traveled in a pack, playing nearly every day on the beach in normal times, relatives said. But they had been cooped up during nine days of bombardment, said Nasreen al-Bakr, an aunt of Ahed, whose father had beaten him the day before for defying parents’ orders to stay off the beach.

Israeli gunboats patrol just offshore and have periodically fired shells landward. Still, the area near the port has generally been safe, with a row of hotels that are packed with foreign journalists. Some of the journalists gave first aid to another wounded child on the terrace of the Deira Hotel, where the bodies were initially brought.

“What was the fault of these children?” a woman wailed at the family home. “Are they terrorists?”

Ramzi, 8, Mohammad’s brother, said he had tried to tag along when the boys went to catch crabs and check on the family’s boats. But Mohammad apparently considered that the risk of going to the beach, while acceptable for himself, was too much for his little brother.

“He made me go back to the house,” Ramzi said softly. “He was always worried for me.” (End quote from The New York Times) 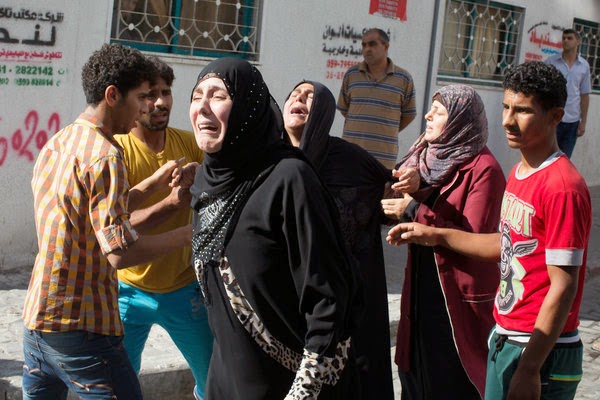 
"To the best of my understanding, it is not possible to ensure summer vacation, a normal summer for our (Israeli) kids without a ground operation in Gaza.”

The idea of forcing a mass evacuation from their homes on threat of death is revisiting the mindset of Naziism.

As a Jew I ask, what has happened to my people, my religion, its ethical teachings, its history of engagement in progressive causes, whether civil rights, labor unionism, antiwar, the nuts-and-bolts of American democracy in action which, absent Jewish participation, is no longer the same, and for the American Jewish community has become a transmogrification of original, indeed primal, humaneness into mass population removal, wholesale bombing of defenseless populations, and now, a center for the disabled?

Lieberman, Netanyahu, etc., what summer vacations do you think Palestinian children look forward to, what "normal summer" when they, their mothers, their fathers are facing death, destruction, loss of home, inadequate medical supplies, blockade?

Except in America, Israel will be known in the world as a Society of Butchers, steeped so deeply in militarism as no longer even able to envision, much less act on, moral choice.

Mass evacuation, so their homes can be destroyed, equals ethnic cleansing.

As I argue in http://thewordenreportinternationalrelations.blogspot.com/2014/07/hardly-fair-fight-israel-and-gaza.html, the extreme imbalance in the respective death tolls suggest the sort of a fight that, were it in boxing, the referee would have called. Why then does the international community have such tolerance for unfairness? I argue that national sovereignty is one reason, but also how our species handles having power.