Israelis and Palestinians: no equivalence of culpability

Israelis and Palestinians:
With such a gross imbalance of power, there is no equivalence of culpability 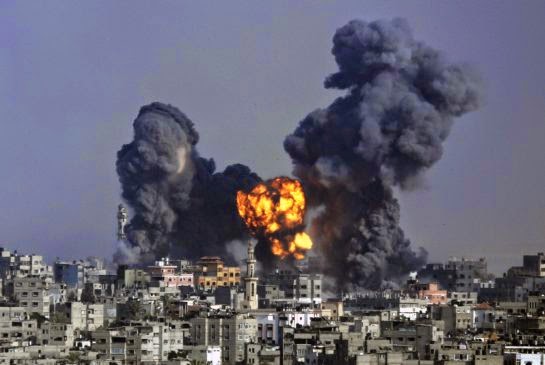 ...In Gaza today we find ways of justifying the bombing of hospitals, the annihilation of families at dinner, the killing of pre-adolescents playing soccer on a beach.

In Israel-Palestine the powerful party has succeeded in painting itself as the victim, while the ones being killed and maimed become the perpetrators. “They don’t care about life,” Israeli Prime Minister Benjamin Netanyahu says, abetted by Obama and Harper (Canadian Prime Minister), “we do.”

Netanyahu, you who with surgical precision slaughter innocents, the young and the old, you who have cruelly blockaded Gaza for years, starving it of necessities, you who deprive Palestinians of more and more of their land, their water, their crops, their trees — you care about life?

There is no understanding Gaza out of context — Hamas rockets or unjustifiable terrorist attacks on civilians — and that context is the longest ongoing ethnic cleansing operation in the recent and present centuries, the ongoing attempt to destroy Palestinian nationhood.

The Palestinians use tunnels? So did my heroes, the poorly armed anti-Nazi fighters of the Warsaw Ghetto. Unlike Israel, Palestinians lack Apache helicopters, guided drones, jet fighters with bombs, laser-guided artillery. Out of impotent defiance, they fire inept rockets, causing terror for innocent Israelis but rarely physical harm. With such a gross imbalance of power, there is no equivalence of culpability.

Israel wants peace? Perhaps, but as the veteran Israeli journalist Gideon Levy has pointed out, it does not want a just peace. Occupation and creeping annexation, an inhumane blockade, the destruction of olive groves, the arbitrary imprisonment of thousands, torture, daily humiliation of civilians, house demolitions: these are not policies compatible with any desire for a just peace. In Tel Aviv Gideon Levy now moves around with a bodyguard, the price of speaking the truth...

On the Contrary is made possible by donations from readers and the sale of Michael Hoffman's books and recordings.