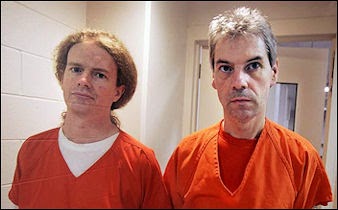 The spectacle in Paris on Sunday, which saw censors and inquisitors like Angela Merkel of Germany who approved a five year prison sentence for German writer Ernst Zündel, marching with Benjamin Netanyahu who slaughtered more than 2100 Palestinians a few months ago, must have afforded the ghosts of the murdered Charlie Hebdo newspaper cartoonists one last spasm of jeering laughter.

The January 7 killing of the anti-Muslim, anti-Catholic and marginally anti-rabbinic newspaper’s top artists, who were shot because they freely expressed themselves, has been transformed into an international commercial for “persecuted Jews” who got tossed into the grief for Charlie by a strategically timed attack on a kosher grocery store in Paris.

The US supports the Wahhabist/Salafist Islam that produced last week’s shooters, although Obama has not been as rabid a supporter as McCain, Romney and Republicans in general. (If Mr. Romney had won the presidency the US would have likely bombed Iran by now and Syria’s Assad would have gone the way of Qaddafy, in what is now the al-Qaeda stronghold of Libya).

The cozy alliance of Congress and Saudi Arabia — which is in no danger of US bombing or invasion —  is evidence of the treason at the pinnacle of the US government. Congress and the US media "forget" that Saudi Arabia continues its compact with the Wahhabist clerics who inspired al-Qaeda and continue to inspire ISIS. If ideas matter, and Right wing Republicans continually tells us they do, then we should be deeply concerned that the US supports a theocracy whose state-sponsored imams disseminate the thinking behind the army of Boko Haram (which last week razed the the entire town of Baga, killing at least 2,000 Nigerians), the head-choppers of ISIS, and the supposed 9/11 airline hijackers of al-Qaeda.

Misconceptions about Freedom of Speech in Judaism and Islam

A popular myth has it that Islam cannot abide freedom of speech while Judaism is a bastion of the values which have fostered that speech. After serving nearly a year in prison for giving a revisionist history speech in Austria, English author David Irving was on the verge of being released from confinement when Zionist barbarians across Britain and Europe mercilessly howled for his continuing imprisonment. Any free speech values that Judaism supposedly harbors are largely for public relations value and are derived from the Christian West, and from the Judaics who were inspired by the Enlightenment to form the Haskalah movement, which eventually repudiated the Babylonian Talmud, and whose members were known as maskilim.

One such maskil was Joseph Perl (1773-1839), author of a book that revealed secrets of Judaism, Megallé Temirin. All available copies of this volume were bought up and destroyed by Orthodox rabbis and their followers. This was similar to the treatment the Catholic Holy Roman Emperor  — at the request of his army's financier, Samuel Oppenheimer, and his court’s Hoffactor, Rabbi Samson Wertheimer — accorded to Lutheran polymath Johann Andreas Eisenmenger’s masterpiece, Entdecktes Judenthum in 1700; and which Orthodox Judaics inflicted on Israel Loebl’s anti-Talmudic book Sefer ha-Vikkuah in 1797. These are not isolated cases. Talmudic Judaism is inherently totalitarian.

Judaism, like Freemasonry (another phony “bastion of liberty”), is concerned with freedom only for its members, the Holy People, who are set above humanity. This is why most of the victims of the modern British and European inquisition against revisionist writers and activists are almost completely disregarded by the media, and someone like Merkel who can jail German writer Ernst Zündel for five years, is allowed to commemorate Charlie Hebdo in Paris without even one journalist from a major news outlet challenging her disgraceful charade.

Britain, France, Germany and other “democratic” European countries jail intellectuals like Zündel, Robert Faurisson, Germar Rudolf and David Irving with total impunity. These men are not insiders; they’re not members of the Brotherhood or the Holy People’s tribe. In spite of all of the palaver about racism and bigotry, the ultimate in that field is the rendering of those who are not spokes in the Talmudic-Masonic wheel, to the status of sub-humans and non-persons. The two-faced Talmudic-Masonic standard that was present at the founding of modern France in 1789 has stood the test of time. 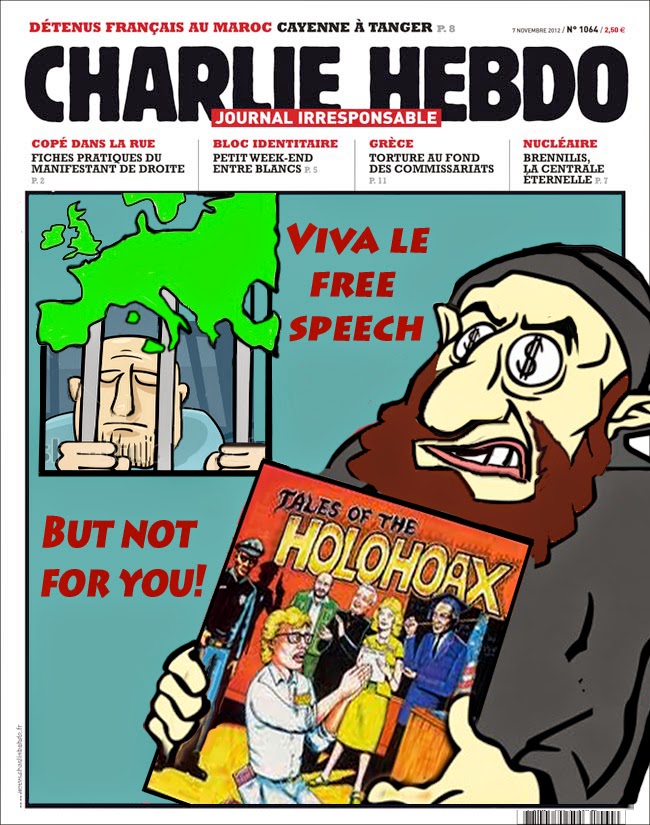 In Britain, Simon Sheppard and Stephen Whittle were imprisoned for distributing this writer’s own exercize in Charlie Hebdo-style “blasphemy,” the Tales of the Holohoax cartoons. Again, because Sheppard and Whittle are not plugged into the networks of Judaism, Zionism and Freemasonry, whatever happens to them, however much it may radically undercut the rhetorical sleight of hand which the Cryptocracy is now employing, the newsworthy fact that two English guys went to jail over cartoons lampooning Holocaustianity, is deemed unworthy of news coverage in the midst of the public agony over the fate of Charlie’s cartoonists.

Terrorists like Netanyahu and dungeon-operators like Merkel can march on the boulevards of Paris in the name of liberty and human rights and instead of being jeered off the streets and shamed for their disgraceful farce, they comprise the face of “the fight for freedom of speech and against terrorism.”

This hallucination is part of the civic magic which has emerged in our hypnotic age. The terrorist factions of Islam will not be halted by this moronic spectacle, or by the Right wing parties in Europe whose adherents are aborting and contracepting themselves out of existence, while Muslim parents give birth to as many children as Europeans did when their nations were still Christian.

The British and Europeans have cut a deal with the rabbis and Zionists to repress writers and activists who blaspheme Holocaustianity and the religion of the Talmud. Muslims understand this. The whites of Europe mostly do not.

Muslims will never consent to the bargain to which modern Europeans and the British have submitted — a Zionist fatwa against “extremist” writers who oppose Judaic religion and history —  a pious dictate which has become the law of the land in a UK and Europe which demands that Muslims “learn to tolerate” the type of withering satire and mockery which landed Sheppard and Whittle in Her Majesty’s clink.

The current situation in which Zionist supremacists enjoy immunity from the tough satire to which Muslim subordinates are subjected, is a self-defeating recipe for disaster. This fact lights the way to the probability of a conspiracy at work, with the goal being a police state across the western world to “defend” against that which the Establishment itself has conspired to create. The “war with radical Islam” is being mounted by a Europe which supported al-Qaeda against Qaddafy and the Islamic State against Assad, and now finds itself under siege by al-Qaeda and the Islamic State. Surprise, surprise.

Anyone who truly cares about peaceful coexistence in Britain and Europe will dump the double standard and choose to either grant Muslims the same legal protection from doubters, deniers and mockers which Judaism and the sacred gas chamber relics enjoy, or better yet, affirm freedom for all and open the printing presses, televisions and microphones to untrammeled access by the Faurissons, Zundels and Irvings, and to the cartoonists who antagonize Judaics as much as Charlie Hebdo did the Muslims.

reminiscent of the NY Times' Deborah Lipstadt vs. David Irving trial...what an injustice to mankind. may no mans pen be thwarted by these far more evil human muzzles.