On January 7, 1985 the seven week show trial of  German-Canadian dissident Ernst Zundel commenced in Toronto, Canada. The "Crown" prosecutor sought to have Zundel imprisoned for two years on a charge of disseminating "false news," a surrealistic "crime" in the eyes of the Queen of England (thank God for the American Revolution).

Ernst had published a book by an English author, Did Six Million Really Die? The full resources of the government were brought to bear against him for the purpose of imprisoning him. Zionist JDL terrorists were stationed outside the courthouse with the intention of beating or perhaps even killing the defendant, his legal defense team (Doug Christie, Keltie Zubko and Prof. Robert Faurisson) and an American reporter who had arrived at Zundelhaus the night before and took up residence there for the duration of the trial (yours truly).

The media initially mocked Zundel as a nut case, predicting the Crown prosecution team with its millions of Canadian taxpayer dollars would easily rout and demolish Zundel.

As I sat in the press gallery next to Kirk Makin of the Toronto Globe and Mail, television reporter Claude Adams, and the Simon Wiesenthal Center's agent, Zundel's defense team scored a historic coup. The trial produced numerous newspaper headlines and opened several national evening television newscasts which turned Canada upside down (other media, such as the New York Times chose only to cover the first and last days of the trial, with no references to the historic revelations elicited by Christie and Faurisson).

Unfortunately the presiding judge, Hugh Locke, was among the most biased of magistrates (the German revisionists in the courtroom drew unflattering comparisons between Locke and Roland Freisler, Hitler's hanging judge). Zundel was found guilty of the false news charge, a verdict which was eventually overturned by the Supreme Court of Canada.

The saga of Ernst Zundel is told in my book The Great Holocaust Trial, which for a time was banned and seized by Canadian Customs and is now banned by Amazon. It was updated in 1995 to cover the arson of Zundel's house in Toronto, and again in 2010 to report the seven years he served in Canadian and German prisons (much of it in solitary confinement), on charges related to his Internet publishing, over which the government of Germany claims universal jurisdiction.

The Massacre in Paris 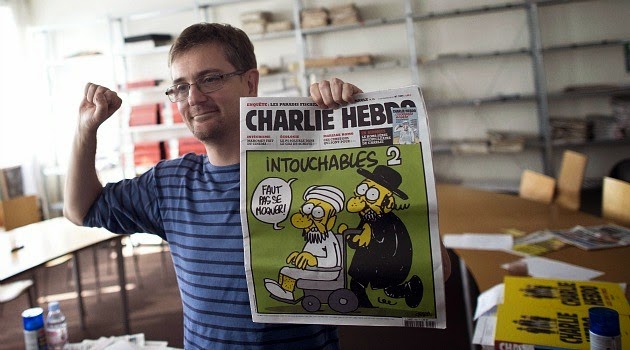 Charlie Hebdo editor Stéphane Charbonnier in 2012 with the front page of his newspaper mocking an Islamic fundamentalist and an Orthodox rabbi. He was murdered today in France.

Today, on the thirtieth anniversary of the trial, I am signing a contract with a publisher for the translation of my book into French. This signing is all the more poignant in that in Paris today it is reported that two police officers and ten staff members of the French newspaper Charlie Hebdo — which has printed not just criticism of Islamic fundamentalism, as the corporate media is reporting, but also revisionist material, including satire of rabbinic extremists — were massacred.

All World War II revisionists are subject to death threats and violence. Prof. Faurisson was nearly beaten to death by Zionists in 1989, and Francois Duprat, a French revisionist teacher was killed in a  bombing in 1978, which severely wounded his wife. In 1984 the Institute for Historical Review's book warehouse was torched and completely destroyed. In 1985 my wife, the mother of three young children at the time, was chased down State Street in Ithaca, New York by a Zionist mob. She saved herself from a beating only by jumping into a car and locking the doors. As noted, Zundel's house was burned with impunity in 1995. Prof. Arthur Butz, author of The Hoax of the Twentieth Century, has been regularly menaced by thugs at Northwestern University.

For naive and dull-witted persons "Islam" is a monolithic enemy of freedom that must be countered in alliance with the "noble" Israelis. People with a bit more sense —  and knowledge of the operations of the secret services —  understand that enemies of Zionism can be liquidated and sympathy for the Israeli state generated, via spectacular terror attacks perpetrated by  Sunni-Salafists who are clandestinely directed by Mossad, the CIA, MI6 and similar shadow agencies. 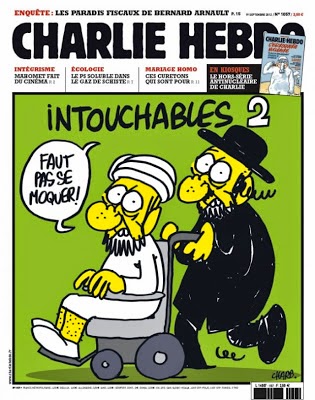 An offending issue of Charlie Hebdo, satirizing sacred cows —  “ intouchables” (untouchables) — a Muslim fundamentalist and an exponent of the Talmud. The caption has them both saying, “Must not laugh at us!” 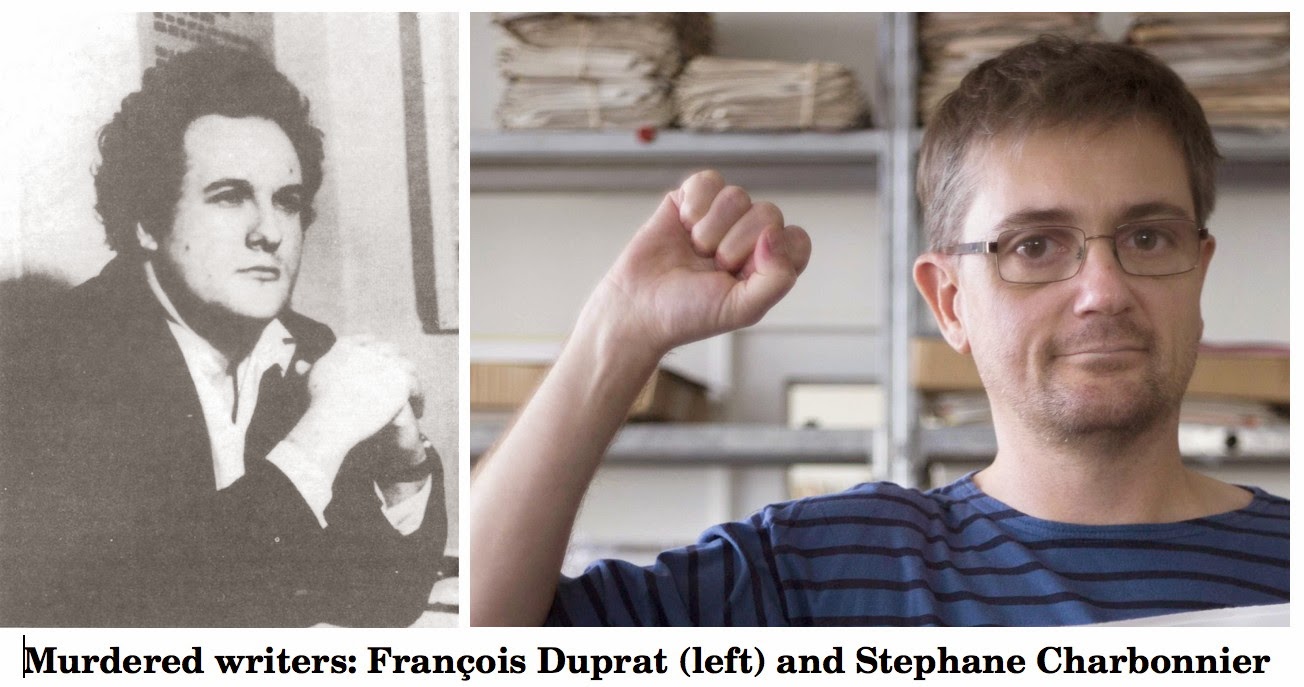 The French publisher of The Great Holocaust Trial will be as much in peril as the Charlie Hebdo people. This is the perpetual price that is paid by those who speak truth to power, beginning with the God-man who first spoke it to the Sanhedrin of Jerusalem some 2,000 years ago. Like the massacre in Paris of the Charlie Hebdo staff, which is being ascribed to Muslims alone, the crucifixion of Christ is nowadays blamed on the Romans alone. The French have a saying, plus ça change, plus c’est la même chose.

The more it changes, the more it stays the same, indeed. Very astute analyses. Does the lamestream media come anything close to this? No, they are clueless robots. The sad thing is that any rinky-dink local NPR station can throw a fundraiser at the drop of a hat and raise tens of thousands of dollars. EVERY SINGLE PERSON READING THIS BLOG SHOULD DONATE AT LEAST TEN DOLLARS TO ON THE CONTRARY RIGHT NOW, and help break the iron media curtain.