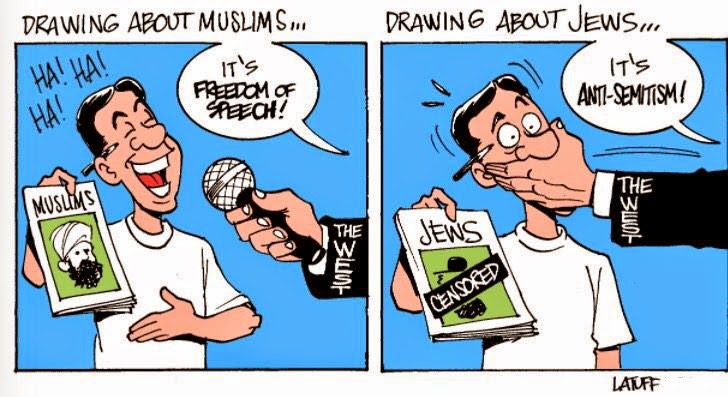 “Satire is a sort of glass, wherein beholders do generally discover everybody’s face but their own.”  — Jonathan Swift

•The French government limits freedom of speech almost as much as the terrorists:
http://wpo.st/lW010   Rescind laws criminalizing “Holocaust denial” !

•France has free speech which only Muslims violate? That’s a lie! Dieudonne and Robert Faurisson are banned in France. In France it’s illegal to publish doubts about gas chambers:
http://en.wikipedia.org/wiki/Gayssot_Act

•The Charlie Hebdo front page we’d like to see:
http://tinypic.com/view.php?pic=21ammh0&s=8#.VLLlaMa3CXw

•Two men in Britain were jailed for distributing Tales of the Holohoax gas chamber cartoons:
http://revisionistreview.blogspot.com/2010/02/tales-of-holohoax-and-denmarks-anti.html

•Cartoon blasphemy of Holocaustianity is damned by the West:
http://revisionistreview.blogspot.com/2015/01/cartoon-blasphemy-of-holocaustianity.html

•Cartoon about Israeli venality denounced as “anti-Semitic” and withdrawn by Australian newspaper: http://bit.ly/1x5XWTP

Great graphic. Thank you for this. How can I get a copy suitable for reproduction?

Greenwald’s analogy (if that’s what it was) fails: most of the anti-Zionist cartoons he chose to publish are lame, bottom of the barrel off scourings; more importantly he neglects to mention that English men went to jail for distributing cartoons satirizing subjects sacred to the Zionists; that’s a telling omission that in my opinion renders his self-congratulatory little exercise a token and toothless one.

I have e-mailed him challenging him to draw attention to "Tales of the Holohoax" and the imprisonment of its English distributors. I’m still waiting for a reply.