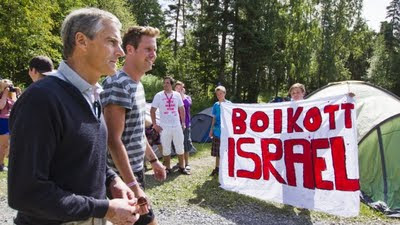 "Boycott Israel": Labour Youth League summer camp, Utøya, Norway, July, 2011
by Michael Hoffman
In the aftermath of crimes perpetrated by the Cryptocracy's "lone nuts," the controlled media seek to muddy the waters with competing theories, motives, background, ideologies and affiliations acribed to the shooter. In the case of Lee Harvey Oswald he has been presented as pro-Castro and anti-Castro; a CIA agent and a Soviet agent; a pawn of the Mafia and a stooge of the FBI. The JFK assassination itself has been presented as a military coup, a mafia hit, a CIA hit, a right wing hit, a left-wing hit etc. The same game has been played with the source of the cancer pandemic in the United States. It is exacerbated by drinking coffee; on the other hand, coffee prevents cancer; cancer is caused by junk food; on the other hand studies show there is no link between junk food and cancer. The point of all of this deliberately seeded confusion is to discourage us from seeking the real causes of cancer and the actual perpetrators of conspiracy. The end result of this misdirection is that the people tend to beieve that "everything causes cancer;" therefore they continue with their status quo lifestyle. The assassination of John F. Kennedy has been so muddied that there is the tendency to think, "everyone killed Kennedy." Of course if everyone did it, then no one did; at least no one we can trace or indict or bring to justice.
This is the process at work in the media in the case of Anders Behring Breivik. They insinuate that he was a proto-Nazi seeking "white Christian" dominion over Europe. His Israeli-driven ideology is given short shrift; mentioned in passing,and then tossed into the mixing bowl with all the competing theories and claims, and lost therein. The fact is, Breivik sought to exterminate a pro-Palestinian Norweigian island youth camp. As we will see, his terrorism is being applauded in "Israel," despite official, pro forma Israeli condolences to the bereaved.
Judaism despises Europe to its heart. This detestation is a core principle of Orthodox Judaism. After the Israelis have extracted the last ounce of financial support and military muscle from Europe they will delight in seeing it reduced to a burning cinder. Breivik is an ignoramus and his ignorance is shared by millions of our fellow Americans, who believe that the Israelis are the allies of the Christian West. For example, Breivik claims to be a type of medieval Crusader. The Crusaders destroyed Judaics wherever they found them. Their crusade was as much against Judaism as Islam.
Breivik is just a weaponized version of modern Judeo-Churchianity's personnel. They all believe the same double-minded buncombe that Breivik promotes. One characteristic of contemporary western whites is their worship of their executioners. The unbreachable chasm between the Judaic and the gentile yawns before their oblivious eyes. Orthodox Judaism is anti-goyimite in its essence. This essence cannot be seperated from Judaism. Anti-goyimism is the foundation upon which the synagogue is based. The rabbinic texts teach that in the coming era of Judaic supremacy, a Judaic may kill even a "righteous gentile" on a whim. Once they have helped the rabbis and Zionists achieve their world-historic objective there will be open season on the millions of church-going lemmings who at the present time adore counterfeit "Israel.” Modern western men and women are afflicted with a profound death wish. Why? With their contraception, abortion and adulation of the antichrist Israelis, they defy God: "All those who hate Me love death" (Proverbs 8:36).
We need to get beyond symptoms. When the Israelites of old rebelled against God, He turned their land over to hostile, alien peoples. Is something similar happening in the U.S., Canada, Australia and Europe, where the children God wants to send into the world are refused, by means of the birth control and abortion practiced by selfish whites? If it is, then the Muslims are sent by God to plague Europe for its sins. How many children did Breivik have? How many children do any of the other "crusaders" among the Zionist white nationalist parties of Europe have?


The Zionists desire war to the hilt with Islam; that is, with nearly one billion people -- for generations. The western intelligence agencies shepherd Al-Qaeda today, just as the Rambam, Moses Maimonides, guided the sultan in the thirteenth century; just as the Judaics of medieval Iberia opened the gates to the Christian forts to allow the Muslim armies to attack.
Here below we present documentation related to Breivik's anti-Nazism and Israeli Zionism. We conclude with testimony concerning the enjoyment the Israelis are deriving from the massacre of Norweigian goyim on the island of Utøya and in Oslo. The Israeli state that was founded by terrorism privately delights in terrorism when it is perpetrated on its behalf.
"In numerous online postings, including a manifesto published on the day of the attacks, Breivik promoted the Vienna School or Crusader Nationalism philosophy, a mishmash of anti-modern principles that also calls for “the deportation of all Muslims from Europe” as well as from “the West Bank and the Gaza Strip.” According to the manifesto, titled “2083: A European Declaration of Independence” and published under the pseudonym Andrew Berwick, the Vienna School (http://gatesofvienna.blogspot.com) supports “pro-Zionism/Israeli nationalism.”
"Anders Behring Breivik, who committed the massacre in Norway on Friday in which over 90 people were murdered, spoke out in the past against Islam and said that he is a strong supporter of Israel, Channel 2 News reported on Sunday. According to the report, in an English document he published on the Internet before the massacre, Breivik called himself a strong supporter of Zionism, praised Theodor Herzl the founder of Zionism, and attacked the European political establishment because he saw it as being anti-Israel. Breivik commended Israel for not giving most of the Muslims who live under its control civil rights, as opposed to the various European countries. He also praised Prime Minister Binyamin Netanyahu for including the Yisrael Beiteinu and Shas parties in his coalition...“It’s time to end the stupid support for the Palestinians and begin to support our cultural cousins – Israel,” Channel 2 quoted Breivik as having written in the document.”


TWITTER: http://twitter.com/#!/HoffmanMichaelA
E-MAIL: hoffman[at]revisionisthistory.org
PURCHASE a revisionist history book, newsletter, CD or DVD:
http://www.revisionisthistory.org/page7/page7.html
DONATE: http://tinyurl.com/4hwh7dz
Michael Hoffman is the founder of The Hoffman Center for the Study of Anti-Goyimism.
On the Contrary is a public service of Independent History and Research, Box 849, Coeur d'Alene, Idaho 83816 USA. Copyright ©2011
***
Posted by Michael Hoffman at 7/26/2011 12:15:00 PM

Could it be, that Europe has the sinister planning within its post WWII period (but extending even from the 1920s and before) to have envisioned a colonialized world under its sway with Jews migrated from Europe (with all force and coercion and even aid) to inhabit a land (Palestine) they have no right to, and most probably the majority don't wish to live in? There they are pushed into an agenda that is certainly contrived to do nothing but destabilize the region and provoke to the uttermost the Arab people.

Europe for Europeans and abortion and contraception killing their progeny at the same time. They seem hell bent for nihilistic-hedonistic destruction and living off the cream without regard for others at the same time.

The European tolerated and even sponsored attack on the core principles of Christianity for 5 centuries is a world scandal before God. Talmudic and Illuminist and pantheistic materialistic Socialist-Communist roots are certainly apparent.

In the end, who in the gang of thieves will double cross who first, I wonder?

Much more importantly, will people throughout the world and especially in the "New World" see through this in time to stop it?

According to http://gryningensljus.blogspot.com/2011/08/utred-pamela-geller.html :
Pamela Geller posted a mail from someone in Norway 2007 containing these words: "We ar sockpiling and caching weapons, ammunition and equipment. This is going to happen fast". After the terrorattack on the 22 juli 2011 Pamela Geller edited this message, removed the text.

Breivik has a lot of connections with patriot-movement sionists both in Sweden, Norway and England. The ones in Sweden are mainly in the Israel-friendly party known as the Sweden Democrats (SD, Sverige Demokraterna). This party has a lot of sionist politicians and one of them is the only Swede ever to recieve the Teodor Herzl Award, for being so good to Israel.

Like I've pointed out on your blog before, the sionists want to lead the patriot movements, especially in Europe. I think they are getting more desperate.

Hi! I would like to know whether there is any evidence for the idea that Musa bin Maymun "guided" the Sultan and wasn't just his doctor?