We’ve been attacked for writing about Dresden

As some readers may know, the Anti-Defamation League of B’nai B’rith (ADL) and the Southern Poverty Law Center (SPLC), among other powerful thought control lobbies in the U.S., are working overtime to cancel our presence on the Internet.

• They have successfully had us banned from Google’s YouTube after our history lectures were viewed by 178,000 people over more than nine years.

• We have been banned by the credit card processing giant Paypal even though our customer satisfaction rating at Paypal was among the highest possible.

• Amazon has interdicted three of our history books.

Now, in response to our writing about Dresden, which we publicized on the social media news forum Twitter, a complaint was filed with Twitter against our fifth installment in the series, “The People Who Were Burned to Ashes on Ash Wednesday.”

Tweet Text: Dresden Holocaust Remembrance Day 5: “The People Burned to Ashes on Ash Wednesday” Churchill and Roosevelt tossed a match into Dresden as casually as a drooling meth addict would torch an apartment building for revenge on the landlord who had evicted him. [https://revisionistreview.blogspot.com/2020/02/dresden-holocaust-remembrance-day-5.html]

We have investigated the reported content and could not identify any violations of the Twitter Rules (https://support.twitter.com/articles/18311) or German law.

Accordingly, we have not taken any action at this time.

This time Twitter resisted the attempt to suspend or ban our access to our 6,500 followers. What will happen next time?

Notice at the end of Twitter’s message it says our tweet has not violated any German law. Michael Hoffman is a citizen and resident of the United States, but his Twitter communications must conform to the laws of the government of the foreign nation of Germany, which apparently has jurisdiction over tweets composed and transmitted in America?

Our situation is precarious. Pressure is regularly being applied to suppress our Truth Mission online. The enemies of the advancement of knowledge have no answer to our work: they can’t refute it and they fear debating us, so they continue to chip away at what access remains to us on social media.

Don’t let them render us invisible! Your donation helps us fight back. Please consider sending a financial gift today for the survival of our Truth Mission. Thank you. 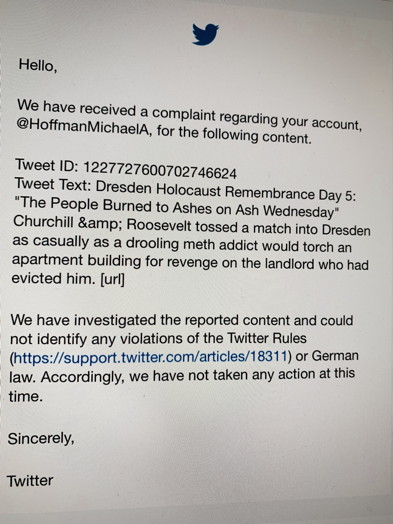