SOLEMN DRESDEN REMEMBRANCE
This is a series of reports by Michael Hoffman, to be issued one per day from February 8 through February 13

(Click for: Day One, Day Two, Day Three, Day Four, and Prayers for the Living and the Dead) 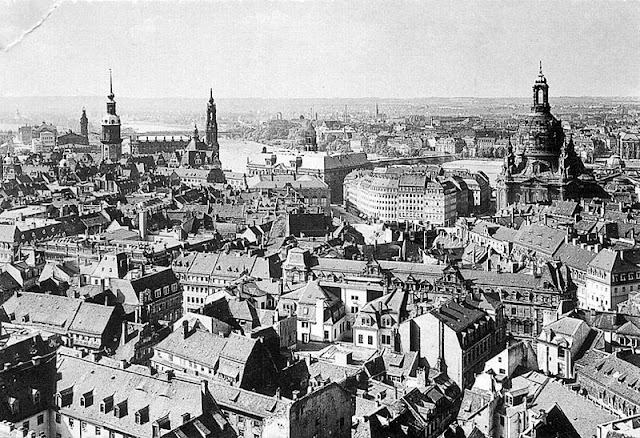 Dresden, capital of Saxony, before the Allied incineration

The People Who Were Burned to Ashes on Ash Wednesday

It was Shrove Tuesday, 1945 in the magnificent German art city of Dresden, which was packed with helpless Christian refugees fleeing the Red Army of the Stalinist USSR. Dresden’s native Lutheran and Catholic children, dressed in their festive Saxon folk costumes, were aboard a train taking them home after Mardi Gras parties at different points in the far-flung city. Still merry from the night’s festivities, they cavorted on the train prior to Ash Wednesday, which in 1945 fell on February 14, and the solemnities that would be observed even in wartime, in memory of the passion and death of Jesus. In the sky, Allied fighter planes caught sight of the civilian train and machine-gunned  the children inside, whose blood was soon pouring out of the wreckage.

This U.S.-British carnage registers almost not at all in the American mind. The holocaust in Dresden, lasting two days and killing at least 100,000 people, like the atomic holocaust in Hiroshima and Nagasaki, usually merits not much more than a few sentences or a single paragraph in the back pages of metropolitan newspapers, unlike “Yom HaShoah (יום השואה) Holocaust Remembrance Day,” in April, which is observed with countless civic, educational and media events from the Vatican to the White House. Barely remembered are the German and Japanese victims of Allied war crimes.

In the spring of 1945, after prosecuting the mass murder in Dresden and every major German city, and with the end of the Second World War in sight in Europe, Winston Churchill began to consider his reputation in the post-war period, when the total 500,000 German innocents he ordered burned to death could come back to haunt him and indelibly stain his image. 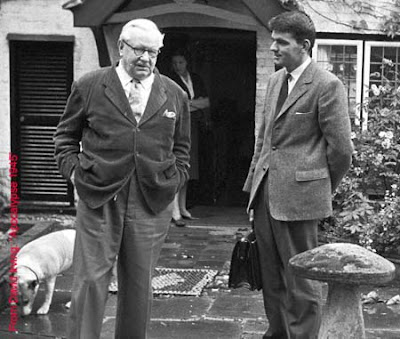 To distract from his own overwhelming culpability, on March 28, 1945 Churchill issued a cowardly, scapegoating memo blaming the mass incineration on his own men of Bomber Command, and by implication, upon its commander, Arthur Harris, whose force would be denied a post-war campaign medal, and Harris a peerage. Harris and Bomber Command had been following Winston Churchill’s explicit orders, yet Churchill attempted to shift responsibility onto the corps of courageous airmen who had suffered among the highest casualties of any branch of the British military in the fight against Hitler.

Furthermore, Churchill, like many other unconscionable liars, propagated the lie that Germany was the first to saturate civilians with terror-bombs—at Guernica in Spain, on behalf of Franco’s forces, and in Rotterdam, during the war with Holland.

In both cases Churchill stated that thousands had been killed. Even one death is regrettable of course, but less than 100 people were killed in Guernica and less than a thousand in Rotterdam, when the Luftwafe accidentally struck a margarine factory and the flammable liquid burned houses nearby.

Churchill had declared that “thousands” died in Guernica, and that 30,000 perished in Rotterdam, which is more than what Deborah Lipstadt generally says died in the two-day inferno in Dresden (the absurdly low figure of 25,000 is now the officially fixed count to which the “news media” conform without deviation).

The British Prime Minister obtained his pretext toward the end of August, 1940, when a lone, wayward German bomber “lost its way flying up the Thames” river. It had orders to attack an oil refinery, but instead dropped its bombs on London’s East End. No one was killed thankfully, but Churchill was elated.

He had the excuse he needed to massively retaliate against Berlin, knowing Hitler would idiotically respond in kind, and that the British peace movement would vanish in the smoke and flames of the “Battle of Britain” and the “Blitz.” Churchill was a brilliant Machiavellian who outfoxed Hitler and anticipated his Pavlovian responses.

In retaliation for that lone Luftwaffe aircraft's non-lethal bombs in London, Churchill ordered a hundred bombers to attack Berlin. Royal Air Force (RAF) commanders warned him that the Luftwaffe would do the same to London.

At this juncture we pause to contemplate the bloody treason that was at the heart of Churchill’s shriveled soul: he wanted as many of his own English civilians in London to die as possible, so that he could point to their deaths as the justification for a total war against Germany, and this Judas succeeded in his objective.

To this day the war crime the leaders of Britain and the United States perpetrated in Dresden is justified on the basis of the tired fable that “Germany did it first to Rotterdam and Guernica,” and “Look at the terror the Germans visited upon London.”

Nothing that occurred in Guernica, Rotterdam, or for that matter London, begins to even approach the scale which the firebombs of the air forces of Churchill and Franklin Roosevelt inflicted on Dresden and numerous other German civilian cities.

On September 4, 1940 Hitler gave a speech in which he stated that if the “mad drunkard” Churchill continued to attack Berlin, the Germans were not going to stand by and take it. It was Neanderthal thinking on Hitler's part: you club me over the head and I will club you. The Nazi criminal was almost always successfully played by  the masonic criminals at the heart of Britain’s ruling class. No matter what Churchill ordered, a wise German leader would have confined his air campaign to British military sites (Hitler's Luftwaffe never bothered to attack the aircraft factories that built Britain’s Lancaster bombers).

On September 6, the English people heard the ominous drone of a fleet of Luftwaffe planes flying up the Thames. Some 3,000 Londoners subsequently died. Now Churchill had what he wanted.

You won’t find these facts in the multi-volume history Mr. Churchill wrote, or in the pages of the celebrated volumes of the conformist historians. To advance knowledge one ought to read and hear the dissident revisionists, particularly the demonized David Irving, who personally interviewed many of the key principals of the Second World War in the Atlantic theatre, and authored one of the first studies of the Dresden firebombing, The Destruction of Dresden.

Irving’s nemesis, Holocaust historian Deborah Lipstadt, has taken it upon herself to deny the casualty figure of 100,000 for Dresden, but God help any one of us who would have the temerity to apply the word “holocaust” to the mass murder by fire in Dresden.

We challenge any reader to collect the legacy media’s descriptions of the bombing of Dresden from the 1990s onward and count how many of those reports truthfully term it a holocaust. We reckon next to zero. The fear is palpable.

The extent to which we are imprisoned in an Orwellian dystopia of our own making is revealed when we consider the fact that it is generally regarded as highly insensitive or indeed “anti-Semitic” to apply the word "holocaust" to the German cities that were incinerated, or to Hiroshima and Nagasaki, even though those war crimes were holocausts by dictionary definition: “Destruction or slaughter on a mass scale, especially caused by fire. Origin: Greek holokauston, from holos ‘whole’ and kaustos ‘burned.”

A half-million German civilians and three-quarters of a million Japanese civilians (including the victims of the March, 1945 fire-bombing of Toyko), were indeed burned to death.

Churchill and his top military circle set afire the medieval cities of their German cousins, who only two generations before had comprised the royal blood within the House of the German-speaking Queen Victoria.

A thousand years of national and religious wars in Europe had not managed to wreak the destruction which Churchill and the American President Roosevelt directed against the cultural treasure houses of western civilization, in cities like Dresden. They tossed a match into Dresden as casually as a drooling meth addict would torch an apartment building for revenge on the landlord who had evicted him.

Yet “conservative Christian” American university professors and administrators in institutions of higher learning such as Michigan’s esteemed “conservative” Hillsdale College, which is the recipient of large donations from “Conservatives” seeking to preserve western civilization, have hallowed Churchill into a paragon of decency, valor and western leadership. The canonization of this mass murdering vandal is such a defect of vision as to be fatal spiritually, culturally and politically on a national scale.

If the powers that be decided, for example, that Russia in 2022 needed to be fire-bombed, given sufficient pretext our “Conservatives” would do it all over again in the name of “civilization.” The blood of the innocent in Moscow and St. Petersburg would signify no more to the “Conservative" crusaders than the charred bodies of the civilians in the apocalyptic wreckage of Dresden.

American civilization in 2022 is not worthy of the name. We have the illusion of a civilization, which we cherish for our own aggrandizement and nostalgia.

Michael Hoffman is a professional historian, the editor of the periodical Revisionist History® and the author of nine books.

Copyright©2018-2022 by RevisionistHistory.org
As some readers may know, the Anti-Defamation League of B’nai B’rith (ADL) and the Southern Poverty Law Center, among other powerful thought control lobbies in the U.S., are working overtime to cancel our presence on the Internet.

• They have successfully had us banned from Google’s YouTube after our history lectures were viewed by 178,000 people over more than nine years.

• We have been banned by the credit card processing giant Paypal even though our customer satisfaction rating at Paypal was among the highest possible.

• Amazon has interdicted three of our history books.
Our situation is precarious. Pressure is regularly being applied to suppress our Truth Mission online. The enemies of the advancement of knowledge have no answer to our dissent: they can’t refute us and they fear debating us, so they continue to chip away at what access remains to us on social media.

Don’t let them render us invisible! Your donation helps us fight back. Please consider sending a financial gift today for the survival of out Truth Mission. Thank you.

The Hebrew word for fire is "ash" (long a) Strong's # 784
https://www.blueletterbible.org/lang/lexicon/lexicon.cfm?Strongs=H784&t=KJV&ss=1

The history writing disgusting warcriminals USA and UK still (with impossible and therefore false and pure evil extremely harmfull accusations) make dissidents of (the families of) neutral Dutch civil servants who "survived" this insane Dresden carnage and had the authority by law to make up official report.....dared to do so and did.
As they reported: Upon arrival in Dippoldiswalde from Dresden in the evening after the night and day fire-bombing, all hotels, pensions etc. were empty.
YOU COULD GET A ROOM EVERYWHERE.

Think about that and about the (for months already) 1.5 million people packed together in Dresden at the time.......

Furthermore, Churchill, like many other unconscionable liars, propagated the lie that Germany was the first to saturate civilians with terror-bombs—at Guernica in Spain, on behalf of Franco’s forces, and in Rotterdam, during the war with Holland

Maybe not in Guernica, but definitely in Poland (mainly Warsaw) in September 1939. So yes, the Germans were the first to terror-bomb civilians in WW2. That is 100% percent accurate. Poland remembers. With all due respect, Mr. Hoffman, as much as I appreciate your otherwise brilliant work, on that one thing (the supposed innocence of Germany w/ regards to targeting civilians), you are mistaken.
https://www.youtube.com/watch?v=C8eAmFrPS7U