(Click for: Day Two, Day Three, Day Four, Day Five; and Prayers for the Living and the Dead)

This is a series of reports by Michael Hoffman, to be issued one per day from February 8 through February 13, 2020 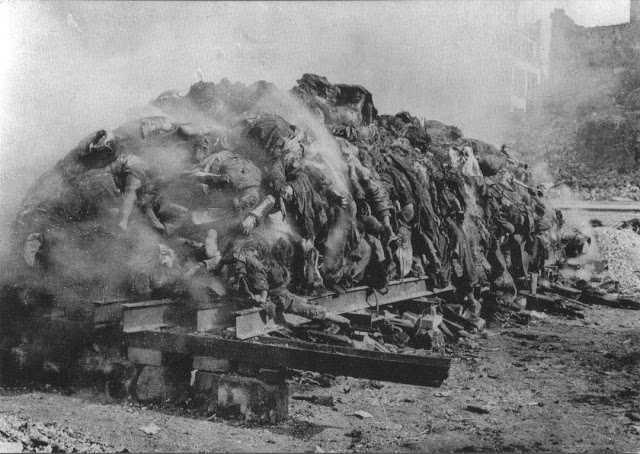 Roman Catholic German Hans von der Heide was a combat veteran of the German military.  In 1985 he related to Michael Hoffman on videotape, that after the war he and his fellow soldiers were held captive in an American POW camp and were shown atrocity photos of German crimes. One of the photos was said to be of “Jewish victims of Auschwitz.” The photo shown was the one we have reproduced above. Mr. Von der Heide told us that one of the German soldiers present knew Saxony well and shouted to the American in charge of their re-education session, “Those are the dead of Dresden, not Auschwitz!”

75TH ANNIVERSARY OF THE MASS MURDER OF 100,000 GERMAN MEN, WOMEN AND CHILDREN

Saturation Bombing in World War II
Who is to Blame?

Censorship: the video of Mr. Irving’s speech, which was filmed in July, 2015, was subsequently banned and removed from YouTube, which thereby denies humanity the advancement of knowledge. The new inquisition will not allow this advancement. Superstition and ignorance are preferred. This is the fate decreed for all of us when we ask the questions our would-be slave masters cannot answer.

Background: When he was 77, British historian David Irving gave a speech in London on July 24, 2015 on the so-called “battle of Britain," to an audience of 120 at the four-star Rembrandt hotel.

This brilliant talk can be viewed at the link above. The controlled media declare that Irving is a “disgraced” author, but in this lecture one sees a champion of suppressed truth, on his steed jousting full tilt at the reigning stupidities that pass for “proven fact” in this new dark age, in which the sacred dogmas of Talmudism and Zionism hold dominion over the mind of man as surely as papalolatry once did.

Mr. Irving addressed the question of who began the bombing of cities during World War II. His subject is the perfidy of Winston Churchill and a correction of received opinion concerning the standard account of the Nazi bombing of Britain, Rotterdam and Guernica.

We have had the privilege of being acquainted with this eminent historian since 1985 and have heard him speak many times. His presentation in London in 2015 is among his best. He is at his ease and his sense of wit is spontaneous and refreshing in light of what he has endured (more than a year in prison in Austria for a speech much like the one he gave in 2015; impoverishment, physical assaults and relentless libel in the media).

In the course of his address in London, Irving commends the RAF crews that flew the bombers over Germany. He advocates honors for the RAF’s Chief of Bomber Command, Air Marshal Sir Arthur Harris. We disagree with Mr. Irving’s admiration for Harris.

Nevertheless, David furnished important facts that deflate the historical myth that Churchill was “reluctantly goaded” by Harris into the criminal incineration-bombing of German cities. In fact, as Irving shows, this holocaust of German civilians was Churchill’s brainchild.

Irving provides revisionist information on the Allied incineration of Dresden, the German city which was the subject of The Destruction of Dresden, one of his early bestsellers. (The Oxford English Dictionary defines the word “holocaust" as death by fire. Consequently, it is perfectly legitimate and accurate to refer to “The Holocaust in Dresden”—as well as in all of the civilian centers of the major German cities that were criminally saturated with firebombs by the “noble Allies,” as part of their celebrated “Good War”).

The malicious British press, dripping with venom, lied with customary indifference to reality, concerning what Irving said at the meeting at the London Forum. The odious Daily Mail, in a headline in its Sunday edition, stated: “David Irving tells secret rally ‘The RAF are war criminals.”

Irving said precisely the opposite. Moreover, the “rally” was only “secret” (private) out of concern for the need to evade attacks by Communist or Zionist terrorists, which the Daily Mail would not report. The great thing about demonstrably false media lies like the one retailed by the British media, is that they prove that the Establishment traffics in brazen deceit as the principal method by which they sustain their pious orthodoxies.

The astoundingly obtuse, Churchill-as-Sage-of-Western-Civilization folderol remains a fixture of the American Right-wing in bastions such as Hillsdale College.  We may disagree with Mr. Irving on any number of historical subjects but when it comes to the Churchill legend, he is its most effective demolition-expert.

The spot where the corpses of German civilians were piled, as shown in the photo at the top of this page, is today marked by an engraved stone put up by the post-war German government. It is inscribed, “Germany brought war to the world and here it was brought back to Germany.”

Do the fools who scribbled that epitaph understand the implications of what is, in effect, their alibi for terrorism?

It was America that “brought war” to Iraq. Therefore, is it permissible for Iraqis to commit terrorism and set American cities filled with civilians on fire?

It was the Bolsheviks, many of whom had been raised in Talmudic homes who “brought war” to the Christians of Russia. Therefore, was it permissible for Hitler to terrorize Judaic civilians?

There is no excuse for targeting civilians, whether by Hitler, or ISIS in the Middle East or the British and American Allies in the heart of ancient Saxony.

Do yourself a favor by taking the time to listen to the Irving speech. You will, in the course of a little over an hour, obtain an education in the suppressed history of the air war over Britain and Germany.

David’s primary research-based scholarship, with its contrarian truths about who commenced the World War II bombing of cities and who were its victims, sustains an incandescence in what would otherwise be darkness—may it light our path to a commemoration of all holocaust victims, including the half-million German ones. 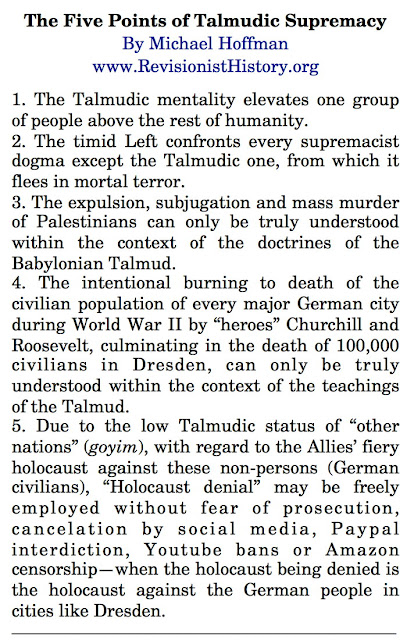 Michael Hoffman's objective studies of the Talmud are for sale here

Incessant bleating of victimhood by Zionist, pseudo-Israel Jews must be countermanded. At no small risk to himself, Michael Hoffman has carried that banner with his books, lectures and publications. Hoffman's research and expositions are every bit the equal of David Irving's and ought to be read and heeded. I began years ago with, "They were White and they were Slaves" and have continued through all but Hoffman's latest, The Occult Church of Rame.
My recommendation is to read all you can by David Irving and Michael Hoffman. Sound scholarship is diminishing at an ever increasing rate.

Michael Hoffman is simply a brilliant man.
I bought several books including Judaism's Strange God's
This book is required reading for anyone who claims to be a Christian.
Michael's great insight into the jewish mindset helped me pen a most difficult article
https://destinedtoberevealed.com/covenant-replacement-theology/

The only reason Michael is not a household name is
1- the Zionists control almost everything today including how most people think
2- Most so-called Christians could not handle the truth and instead they reassure themselves how much their Jesus loves them and how they will soon be raptured and how the Jews are God's chosen ones
Thanks Michael you are an amazing Man And Bravery is a definition of Mr. Hoffman

In Dresden, more than 250 Thousand Germans were murdered in mass. The US bombed other towns and cities, as well, and used chemical weapons on civilians. Worse, they bombed Red Cross tents, and when the nuns came out and tried to save the survivors, they sent fighter jets to strafe the rescue workers and the victims.

I know. My mother saw it all. She was there.

As for the concentration camps? The Allies bombed the supply lines and trains carrying food and supplies there. The people died of starvation and disease....just like the rest of the German population. The Allies dropped potato bugs on the crops, and the German school children had to go pick them by hand. There was no food in the store to buy.

Don't kid yourself. That whole thing was designed to destroy German and elevate the banking system and form the UN. They then used the excuse that nobody wanted the Jews to steal that land they like to call Israel.

When will the Daily Mail tell the world about the British concentration camps in South Africa where tens of thousands of Boer women and children died of starvation and disease? All because rich, London Jews wanted to steal the gold and diamonds of the Transvaal.
As for the "brainchild" of the civilian bombings, it was more likely Churchill's "science" advisor, the Alsatian Jew Lindemann, aka "Lord Cherwell," who said, "the bombing must be directed against working class neighborhoods. Middle class houses have too much space between them and are so bound to waste bombs."