This is a series of reports by Michael Hoffman, to be issued one per day from February 8 through February 13, 2020

(Click for: Day One, Day Three, Day Four, Day Five, and Prayers for the Living and the Dead) 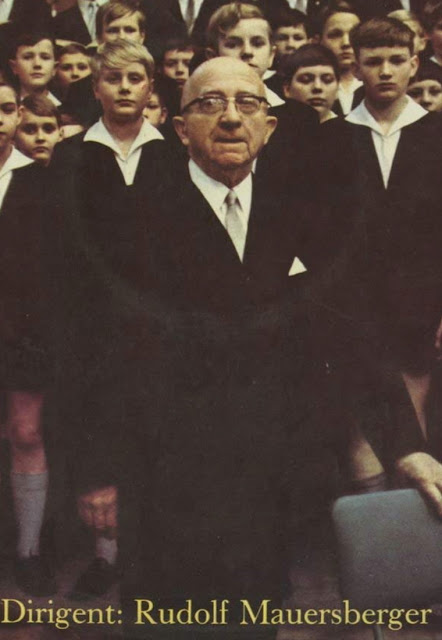 From a review in French at Amazon.com of a CD of “Dresden Requiem”

(The CD is for sale online here)

Michael Hoffman's Note: Every February 13th, the bell of the Lutheran Kreuzkirche (Church of the Holy Cross) solemnly rings at Dresden’s city center at six o’clock. There is silence in the old market square at that moment. Then follows Rudolf Mauersberger’s music, "Dresden Requiem," composed to commemorate the victims.

Few people outside of Germany are aware that this beautifully mournful and solemn music commemorating a Holocaust that is even now denied or radically minimized, is available on a compact disk.

Acquire the CD. Play the music, and in the midst of it offer prayers for all the forgotten innocents who have been murdered while the crimes of their murderers are severely diminished by the New York media and Hollywood, because the victims were the goyim of Gaza, Beirut, Tokyo, Hiroshima and Nagasaki, and every major city in Germany. It is not permitted in the media to refer to the slaughter of these low status beings as a holocaust. The lives of these murdered goyim are considered too cheap to merit the honorific. This is the state of “human rights” in the West today.

Mr. Loncin provides background on Dresden and a review of the music CD. (His review has been translated from the original French). 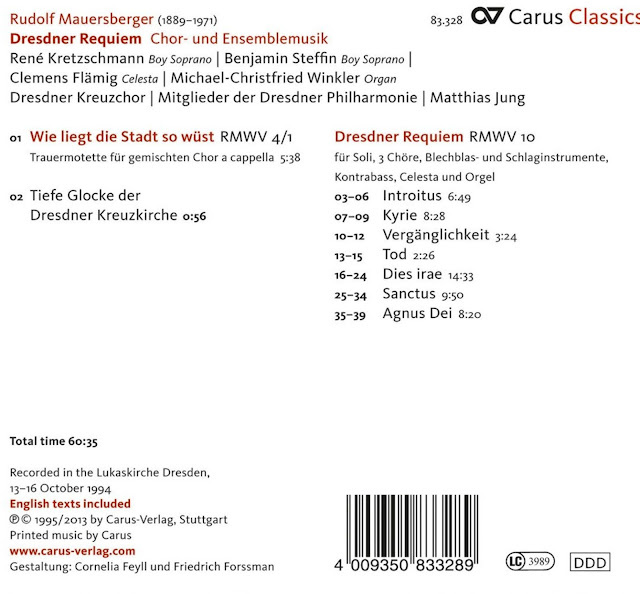 I bought this CD just at the announcement that it contained the funeral motet "Wie liegt die Stadt so wüst" (How the city is so desolate"), the music of mourning, created on August 4, 1945 in the ruins of the Kreuzkirche and sung by the Dresdner Kreuzchor (Dresden’s boys' choir), directed by Rudolf Mauersberger, the composer and cantor of the Church of the Holy Cross when it was destroyed by fire bombs.

Composed on Good Friday and Saturday 1945 (just a few weeks after the war crime against humanity perpetrated in Dresden by the will of the war criminals against humanity, Churchill and Roosevelt who, since then, and more than ever, benefit from the full indulgence of a blind and deaf humanity).

This funeral motet, written in the tone of F minor in measure 3/4, quotes several verses from the Old Testament’s “Lamentations of Jeremiah,” with regard to the destruction of Jerusalem.

Mauersberger’s work is divided into three sections. The first relates to the extreme misery of the City (Jerusalem representing Dresden). The second begins with a Cri "Warum" ("Why"), repeated four times, in F minor, A flat Major, C minor and, again F minor.

It is a cry so fully human of the man who no longer understands, and appeals to God.

The last, after a fleeting clarification in A flat Major then F Major: man folds up in affliction in the face of his Creator ... “See my misery, oh Lord !” A look back at the despair at the start, however, symbolized by the parallel fifths and fourths in F minor, the tone by which the piece ends…

How could it have been otherwise when we measure, in addition to the appalling number of victims, the ignoble hypocrisy of one of the murderers - Churchill - who, far from having the sad courage to admit his crime, strives on the contrary, like Cain, exempting himself from the murder of Abel, putting the responsibility for it on the RAF operatives, and the Air Marshal Harris, first!

May the Voice of the Lord God shout (to him and his kind): "Vox sanguinis fratris tui clamat ad me de terra; nunc igitur maledictus eris super terram." (The voice of your brother's blood cries out from the earth to me; you will therefore be cursed on earth now.)

Mauersberger’s motet does incomparably more justice to the tens and tens of thousands of victims of the extermination perpetrated on February 13 and 14, 1945 (at least, 135,000 murdered) than the film, "Navet Dresden (see my comment), or the "official" ceremonies, when we measure the disgraceful minimization of the number of victims by the will of the federal, regional and City of Dresden authorities.

Mauersberger inaugurated a series of works composed until the 1950s and musically evoking, in a funeral manner, the Fate of Dresden including the Dresdner Requiem, which occupies  the rest of the CD.

Here are the words in German followed by a modest personal translation (I do not claim to have penetrated the deeper meaning):

How the city lies desolate, which was so populated. All its doors are deserted. As the stones of the sanctuary are scattered in front of each street. From above, He sent a fire into my bones that devours them. Is this the city that is said to be the most beautiful, the most joyful in the whole country? You wouldn’t have thought it would end, she’s thrown so horribly down and no one is comforting her. From then on our heart was afflicted and our eyes became dark. Why would You forget us and abandon us? Bring us back to You, O Lord, in the home. Renew our days as before. See my misery, O Lord, see my misery, O Lord!