The people we are to fear

The people we are to fear
— according to St. Bernadette of Lourdes 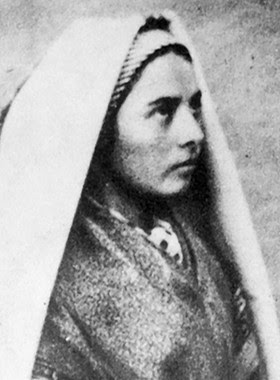 A  Catholic saint had something instructive to impart about those whom we are to fear.

St. Bernadette of Lourdes was a nun in the convent of the Sisters of Charity in Nevers, France in the year 1870. She was interviewed while furious combat was underway in the north of the country, as the seemingly invincible Prussian army advanced on Paris.

A visitor spoke to Bernadette in the convent and asked her:

“Did you receive, in the grotto of Lourdes, or after then, any revelations related to the future and fate of France? Did not the Blessed Virgin deliver any warning for France, any threats?”

Visitor: “The Prussians are at our gates; does that not cause you any fear?”

Visitor: “There is thus nothing to fear?”

Bernadette:  “I only fear bad Catholics.”

Visitor: “You do not fear anything else?”

Bernadette:  “No, nothing else."

The most dangerous enemies of the Church of Jesus Christ are not rabbis or Moslems. They are "bad Catholics” who, with their situation ethics, enable the ruinous dictatorship of the Money Power by allowing the mortal sin of renting money to dominate the nation’s economy, while rendering it a legitimate, moral business model for Catholics (and everyone else).

The most dangerous enemies of the Church of Jesus Christ are the “bad Catholic” popes of the past five hundred years who approved (or kept silent) concerning the Hermetic-Kabbalism of Pico della Mirandola, whose Satanic doctrine, spread by himself and his “bad Catholic" papal and ecclesiastical co-conspirators, crept inside the hierarchy and took up residence there, never to be expelled, rotting the Vatican from the top down, beginning on June 18, 1493, with the papal absolution of Pico, and finally emerging, in the full glare of publicity, at the Second Vatican Council, as its papal herald, Cardinal Henri de Lubac, openly acknowledged.

The most dangerous enemies of the Church of Jesus Christ enacted the masonic doctrine of papal infallibility, instigated by the "bad Catholic" Joseph de Maistre (yes, masonic, a datum not difficult to prove; shock at this fact is a comment on the astonishingly poor state of the history of the Church as presented to dupes by "bad Catholic” authors).

These are just a few of the documented facts which are profoundly destabilizing to true believers in the mythical orthodoxy of the "bad Catholics" at the top of the Egyptian obelisk, i.e. the post-Renaissance, pre-Vatican Council II pontiffs (as well as their post-conciliar successors).

Having no credible counter to these and other revisionist facts, the true believer (cf. the eponymous book by Eric Hoffer), continues to cling to a fantasy Catholicism, while attempting to nullify revisionist history with the corrupt tactic of the liberal media: the infamous "silent treatment."

Bad Catholics will do that. It is part of what makes them the people most to be feared. Corruptio optimi est pessima.

Michael Hoffman is the author of a new revisionist history, The Occult Renaissance Church of Rome.
_____________

Thank you for your work on usury. You mentioned de Lubac. Is he complicit with the Money Power? I've read some of his books on Patristics, but nothing stood out either way. I know that he wrote some notebooks on V2. Are those worth looking into?

Please keep up the good work. I can't wait to get your new book on the Occult Church of Rome for Christmas.

re: Henri de Lubac — see chapter 14 (The Hermetic Prince of Vatican II) in my book, “The Occult Renaissance Church of Rome.”

Thanks. I've been somewhat ambivalent towards de Lubac. In my Protestant seminary days, some of my mentors praised him, and indeed, some of his scholarly works were interesting, but something always seemed off. I knew he was friends with some of the Nouvelle Theologie guys, and I had concerns then.