The Pope, the annulments and the carnival sideshow

The Pope, the Annulments and the Cryptocracy’s Carnival Sideshow

The following appeared on the website of Rorate Caeli, a prominent "Conservative Catholic" blog which is nostalgic for the pontificate of Pope “St." John Paul II. It is excerpted from Italian journalist Antonio Socci's article in the newspaper Libero of Sept. 12. (Socci's words were translated by Francesca Romana). 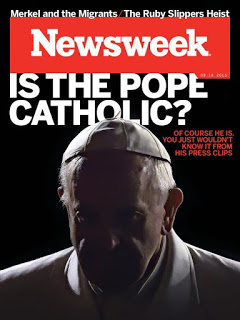 Socci begins with a quote from Newsweek magazine related to its cover story:

Newsweek recently had a photo of Pope Francis on their front-cover with the headline: “Is the Pope Catholic?” Subtitle: “Of course he is. You just wouldn’t know it from his press clips.”

Mr. Socci then adds, "Indeed, it is a legitimate question, seeing that the Argentine Pope has prayed in a Mosque..."

And he did so not as the apostles did, admonishing the sinners therein, but agreeing with them and encouraging them to continue in their sins as, in his words, "Our Elder Brothers in the Faith."

"Catholic Conservatives" like Socci and Rorate Caeli cannot admit the Judas character of their papal saint. The revolutionary change agent John Paul II is now the object of their longing compared with the pontificate of Pope Francis, just as Pius XII was longed for compared with John Paul II.  After Pius XII became responsible "for  some of the most drastic changes to the Roman liturgy in the Church’s history” [1] he in turn was contrasted to ill effect with Pope Pius X.

In every step of this incipient subversive gradualism (which is the hallmark of the Neoplatonic-Hermetic command ideology), a previous pontiff who had been a revolutionary destroyer becomes a hero to “ conservative Catholics" —  compared with the subsequent papal destroyer who is more extreme than the previous one.

Even if, for the sake of argument, we allow the synagogue of Talmudic Judaism to be passed over in silence, and Islam becomes the only villain in the piece, as the timidity typical of the neocon-Conservatives requires, Pope "St." John Paul II still flunks their test of orthodoxy: he kissed a copy of the Koran, leading Mel Gibson's father to famously brand him, "Garrulous Karolus the Koran-Kisser." (John Paul's baptismal name was Karol).

But all that's forgotten, just as, ten years from now, when Grand Rabbi Pinchas Lipshutz is elected Pope, Francis will be the object of Conservative nostalgia.

Centuries ago God’s enemies had stalwart and worthy opposition who were more than a match for the Cryptocracy’s puppet-masters: Dante, Aquinas, Savonarola. In our time there is no one with any national or international prominence or backing who has the wit and intestinal fortitude to decrypt and deconstruct the high hoax which rumbles on inexorably like the wheels of a death coach from hell.

One last guffaw: Rorate Caeli and its Italian journalists such as Roberto de Mattei and the aforementioned Socci, whine about the disastrous marriage annulment fiasco propelled by the current pontiff. They decry the alibi of "lack of faith" as grounds for nullity: "...lack of faith as cause for the invalidity of a marriage has always been excluded by the Church." They are enraged that the evolving liberalization of the annulment process is "without any magisterial and theological base."

How the Cryptocrats must smirk at this double-minded foolery. Surely Rorate, Socci and Mattei are aware of a little something known as the Vatican Bank, which in May posted record profits from its mortally sinful usury, which is "without any magisterial and theological base," and which "has always been excluded by the Church."

Members of the Church of Rome who charge 400% interest on "payday" loans are welcome at the communion rail of any "Catholic" Church in the world (including "traditional" ones).

Christ on the Cross is sold for a dollar.

In fact, everything is for sale except illusion, which is free of charge.

Michael Hoffman is the author of the book, Usury in Christendom. His two hour speech, “The History of Catholic and Protestant Usury" is available on DVD.  His "Notes on the Occult Renaissance Church of Rome" is available on audio CD.
http://www.revisionisthistory.org/page7/page7.html

"Catholic Conservatives" like Socci and Rorate Caeli cannot admit the Judas character of their papal saint. The revolutionary change agent John Paul II is now the object of their longing compared with the pontificate of Pope Francis, just as Pius XII was longed for compared with John Paul II. After Pius XII became responsible "for some of the most drastic changes to the Roman liturgy in the Church’s history” [1] he in turn was contrasted to ill effect with Pope Pius X.

One is tempted to say that 'people today have no sense of principle, logic, proportion' but in the wider picture it seems that they do. They believe in principle that 'The Holocaust' is the greatest conceivable evil and they have a number of other beliefs which 'logically' proceed from that first, fixed principle; i.e. that children must be taught 'the lessons of The Holocaust;' that 'another Holocaust' must be prevented at all costs, etc. Some have emphasized this 'Holocaust' first principle by by declaring a dispensation in the measurement of time: A.A. (Anno Auschwitz).

It seems that the cryptocracy inculcates a self-serving, insane double mind for the West. Logic hasn't disappeared. Rather, it has been adapted and transformed for the ends of Judeo-supremacy. It's a Golem philosophy/theology mockery of Medieval scholasticism.

The present Western double-mind simultaneously incorporates free-wheeling liberal fluidity serving the solve phase (of the dissolve and coagulate process) for the Western 'Goyim' to move them beyond their religion, tradition, culture into a new coagulate of rigid absolutes of Judaic supremacy.

Ever pragmatic Judaism incorporates fluidity and rigidity, whichever is necessary to move towards or consolidate Judeo-supremacy at the given time and place.

Perhaps you have traced the phenomenon farther back in time than I have been able. Can you trace this bait-and-switch, shifting goalposts trickery to a time earlier than Kabalistic Rabbi Isaac Luria's pillars of gevurah, chesed, and tifiret?

Mark Smith asked, "Can you trace this bait-and-switch, shifting goalposts trickery to a time earlier than Kabalistic Rabbi Isaac Luria's pillars of gevurah, chesed, and tifiret?"

Much earlier, back to the zugot, "the pairs” — i.e. to Christ’s alleged contemporary Hillel, and the other half of this duo, Shammai — personifying chesed and gevurah respectively.