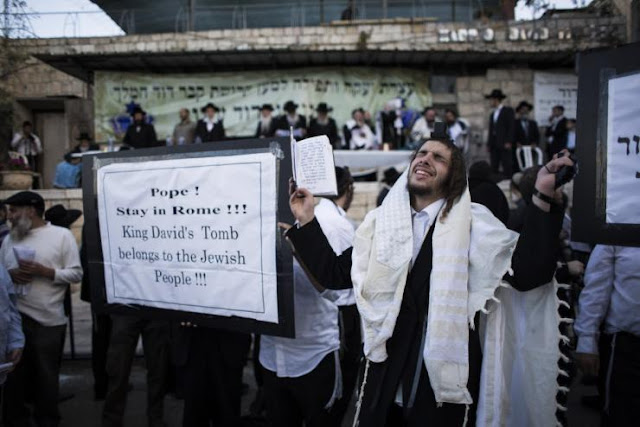 Later-day Talmudic Pharisees in Jerusalem with a sign that reads, “ Pope! Stay in Rome!!! King David’s Tomb belongs to the Jewish people!!!

On Monday June 1, hundreds of Jewish protesters tried to block Greek Orthodox Christians from entering King David’s Tomb in the Old City of Jerusalem. The protesters held a mass prayer service and (Talmud) study session near the site in an effort to prevent the Christian worshippers from entering the complex, the Jerusalem Post reported.

One of the organizers, Yedudah Puah, said the Jews had gathered “to prevent the desecration of King David’s Tomb by an idolatrous ceremony of the Greek Church.” Jerusalem police were able to ensure access for the Christian worshippers to conduct their ceremony. No protesters were arrested at the site Monday, the Jerusalem Post reported.

Rumors that the Israeli government would hand over the site to the Vatican have also intensified demonstrations.

In addition, opponents say, those services will prevent Jews from worshipping in the complex because Jewish law forbids using a building which is used for idol-worship. The use of effigies, icons and other rituals practiced by Christian worshippers fall under the definition of idol worship according to Jewish law, Israeli news outlet Arutz Sheva reported. “I’m shocked and am left shaking from the great desecration of God’s name,” Jerusalem activist Efraim Holtzberg, who was on scene during the protest, told the media Monday.

“Here the previous government made a mistake, there are unwise people who made mistakes and allowed the Christians to hold a ritual once a year. It’s similar to a wedding ceremony in which the groom and bride sign a contract that the bride can cheat on her husband once a year,” Holtzberg said.

Michael Hoffman’s Afterword:
In Talmudic (“Orthodox” and “Haredi”) Judaism the worship of Jesus Christ as the Son of God is regarded as idol worship, not just the “icons and effigies” associated with Him. These same Judaic persons who object to Greek-Christian icons venerate photos and drawings of rabbinic “sages” and often wear magical amulets designed by pagan Kabbalists who worship the goddess Shekhinah and wave a Kapporat chicken over their heads in order to transfer their sins into the bird. Who are the actual pagans, the followers of the traditions of the men who were the ancient Pharisees, or the disciples of the Gospel of Jesus Christ?
____________

Hoffman is a former reporter for the New York bureau of the Associated Press. He is the author of Judaism Discovered and Judaism’s Strange Gods and has written lengthy scholarly introductions to new editions of Johann Andreas Eisenmenger’s Traditions of the Jews and Alexander McCaul’s The Talmud Tested. Hoffman is the editor of Revisionist History, a printed journal published six times a year. His columns online are made possible by donations and the sale of his publications and broadcasts.
____________

If they really believe that it is the site of King David's tomb, why are they urinating on the site almost daily?

And all that no matter that the "Tomb of David" is not the tomb of David!
In the 4th Century AD the 'Pilgrim of Bordeaux' reports that he discovered David to be buried in Bethlehem, in a vault that also contained the tombs of Ezekiel, Jesse, Solomon, Job, and Asaph, with those names carved into the tomb walls. I Kings, 2,9 says that David was buried in "the City of David along with his forefathers". It is clear that it was Bethlehem!