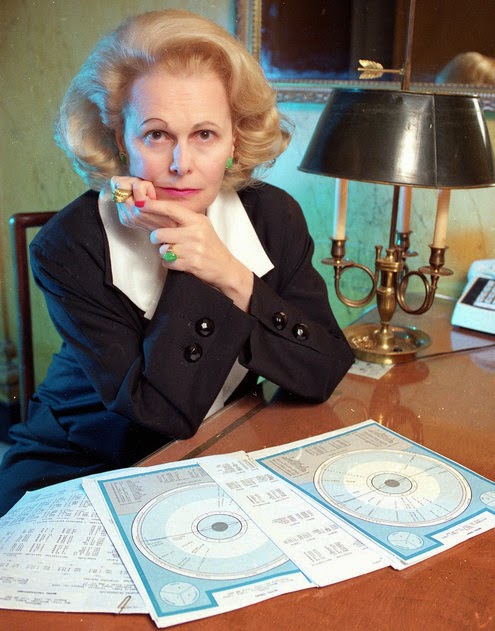 Joan Quigley with her “charts,” posed hand and finger gestures.
Notice the arrow in the mirror at right (above the lampshade).

White House Astrologer Dies — No, we’re not referring to Obama's White House, or the White House in the Clinton or Carter administrations. Joan Quigley (Kansas City, MO April 10, 1927 - San Francisco, CA Oct. 21, 2014), was President Ronald Reagan’s astrologer. He’s the president relentlessly touted in Right wing media as a “true American” and "the greatest conservative to serve in the White House”—  one of America’s finest exemplars. As usual, this is smoke and mirrors for the suckers.

Quigley set the time for summit meetings, presidential debates, Reagan’s 1985 cancer surgery, State of the Union addresses and more. Without approval from the astrologer, Air Force One did not take off.

Donald Regan stated: “Virtually every major move and decision the Reagans made during my time as White House chief of staff was cleared in advance with a woman in San Francisco who drew up horoscopes to make certain that the planets were in a favorable alignment for the enterprise.” (cf. For the Record: From Wall Street to Washington).

In Nancy Reagan's 1989 memoir, My Turn, the former first lady said she called Quigley in the aftermath of an assassination attempt on the president. "I'm scared every time he leaves the house," she told Quigley, seeking advice on the timing of President Reagan's comings and goings...The former First Lady, who said she was highly embarrassed by the revelation of Quigley’s role (payments to Quigley had been made through a third party to try to keep the relationship secret), wrote in My Turn, "While astrology was a factor in determining Ronnie's schedule, it was never the only one, and no political decision was ever based on it.”

Joan Quigley graduated from Vassar College with a degree in art history. Following the interest of her mother in astrology, she apprenticed herself for a year to a person the New York Times identified as "a soothsayer named Jerome Pearson." After college Quigley penned an astrology column for Seventeen magazine. Quigley used the alias, "Angel Star" in some of her writing. Miss Quigley met Nancy Reagan through a client, the entertainer Merv Griffin. From 1972 to 1985, Quigley was a regular guest on Griffin’s syndicated talk show. A Republican, she worked on Reagan’s campaigns for governor of California. Quigley wrote a book about her experiences with the Reagans, What Does Joan Say? (This was the question which Quigley says the the President would often ask the First Lady when he was faced with an important decision).

Members of the Federation of American Scientists, including five Nobel laureates, protested Quigley’s influence over the Reagan presidency. Carl Sagan wrote in The Demon-Haunted World: “Nancy and Ronald Reagan relied on an astrologer in private and public matters — unknown to the voting public. Some portion of the decision-making that influences the future of our civilization is plainly in the hands of charlatans.” 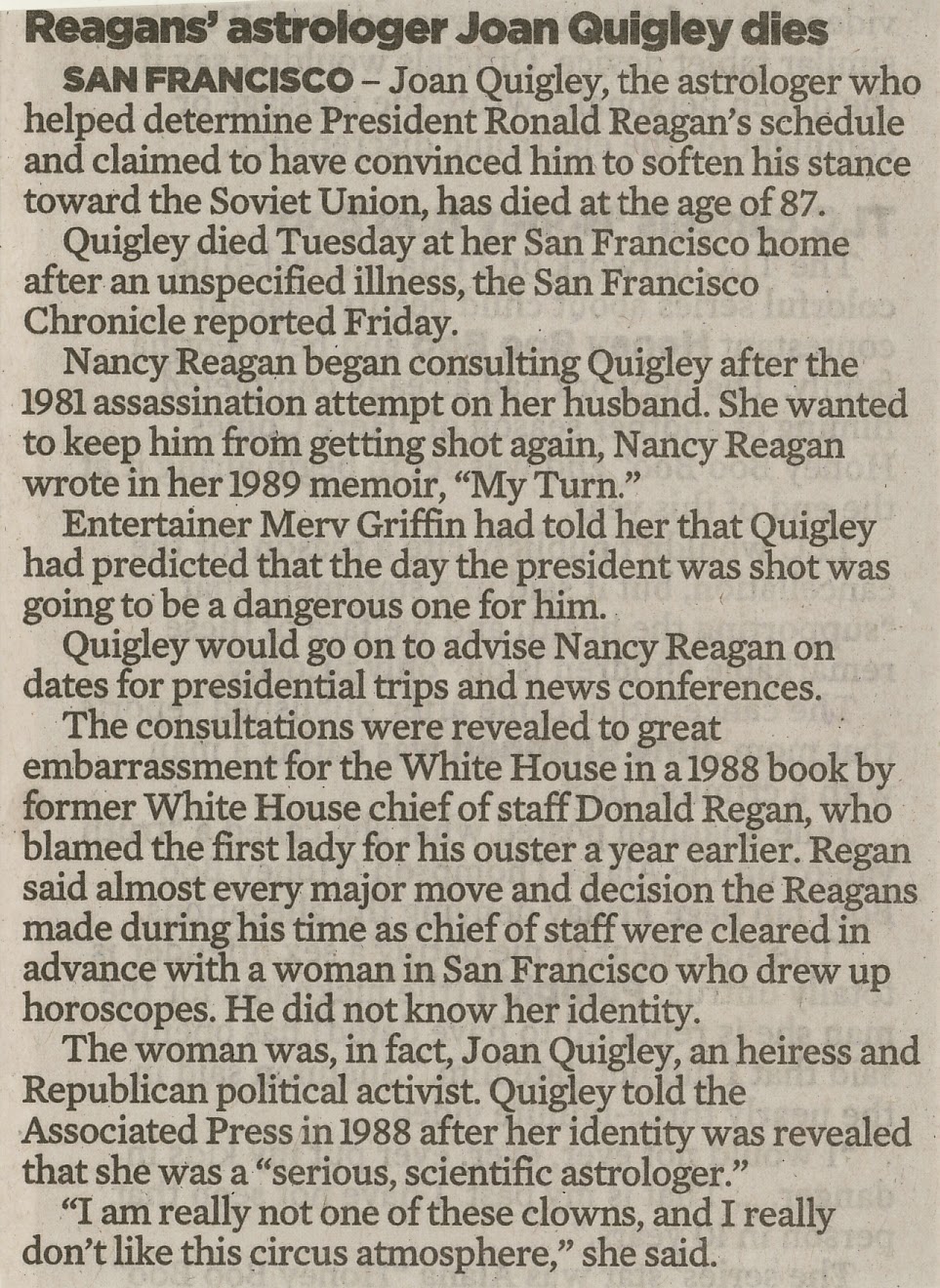 "Thou art wearied in the multitude of thy counsels. Let now the astrologers, the stargazers, the monthly prognosticators, stand up, and save thee from [these things] that shall come upon thee. Behold, they shall be as stubble; the fire shall burn them; they shall not deliver themselves from the power of the flame..."  — Isaiah 47: 13-14 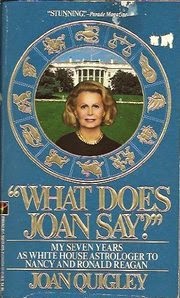 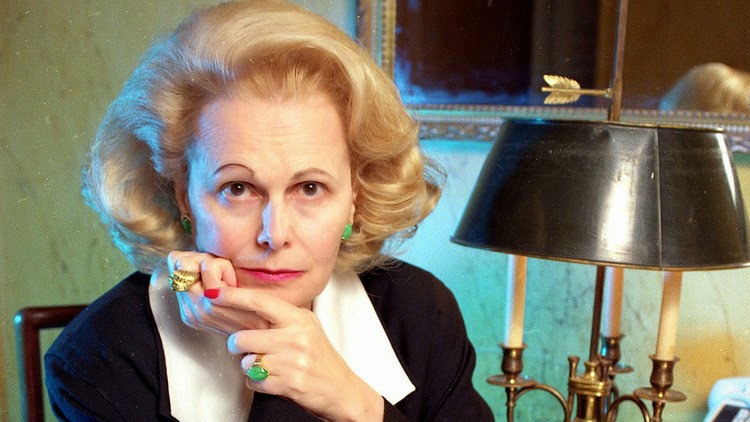 Michael,what is the meaning/significance of the arrow in the mirror?

Belomancy - divination by where the arrows fall.

She died as Libra moves into Scorpio and Scorpio is the zodiac sign at the top of the zodiac circle on her book.