Top Rabbi calls for extermination of the Iranian people

NEWS SUPPRESSED BY THE CORPORATE PRESS
(The New York Times, as of Sept. 6, has yet to report this Aug. 25 event)

Recovered from the Media Memory Hole:
Top Rabbi calls for extermination of the Iranian people

Michael Hoffman’s Note: This is not the first time that Sephardic Rabbi Ovadia Yosef, a powerful Israeli politician who has members of his party in top positions in the Israeli government, has called for the extermination of entire nations of people.

The American media have amnesia about the horrific hate speech of this extermination advocate. His latest genocidal declaration has, likewise, been given almost no publicity in the U.S. Now, if Yosef had been a Christian leader and called for the extermination of...well...you know the degree to which the 'fit would have hit the shan' in that case. But rabbinic hate speech is protected speech. Goyim are not supposed to know about it, discuss it or study its connection to Orthodox Talmudic theology. 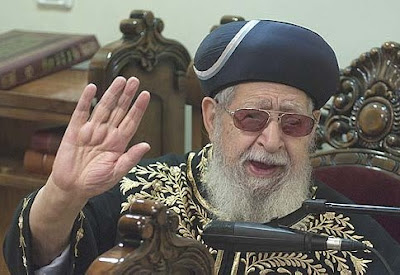 Rabbi Ovadia Yosef, spiritual leader of the Israeli political party "Shas," during evening prayer in his synagogue in Yefe Noff, Jerusalem. Yosef determines all major policy positions for the party (cf. Jerusalem Post, Aug. 26). Israeli Interior Minister Eli Yishai is among the government officials who get their orders from the rabbi. 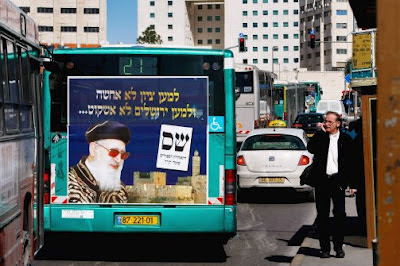 Rav Ovadia Yosef: We Must Pray for the Destruction of Iran
By Jacob Edelist, The Jewish Press, Aug, 26, 2012

With the approach of Rosh Hashana, Rav Ovadia Yosef said on Saturday night (Aug. 25, 2012) that when we eat the traditional holiday symbolic foods, whose names or shapes have a symbolic connection to our supplications to Hashem, especially when we make the blessing over the dates, t’marim, and pray that our enemies be obliterated, we should focus specifically on Iran, the wicked nation which is threatening the State of Israel. “May the good Lord obliterate them, destroy them…”

Tractate Kritut in the Babylonian Talmud teaches that we should eat on Rosh Hashanah, among other fruits, a date – “tamar” – which contains the syllable “tam” or ended, and after eating a portion of it we should say, “May it be Your will, our God and the God of our fathers, that all our enemies and haters and all who plots against us be terminated.”

Also, when we eat a leek (“kreti”) we should appeal to God that our enemies and haters along with anyone who plots against us be destroyed, the Rav clarified that we should focus on the Hizbullah and Iran. “May God destroy them and wipe them off the face of the earth,” said the Rav and quoted many sources in Psalms referring to the Almighty’s salvation in the face of enemy threats. “They go by chariot and on horseback and we will go in the name of Our God. They bowed and fell, and we got up and persevered.”

During discussions throughout the previous week, Rav Ovadia referred to the Iranian threat, saying, “There are evil people, the Iranians, waiting to destroy us . . . .we must pour out our hearts in prayer to the Holy One, blessed be His Name. . . .We are in danger, we are all in danger. . . .We have no one to rely upon, except our Father in Heaven. We must pray from the heart with deep concentration.”


[End quote from the The Jewish Press - emphasis supplied]

Your support is critical to our Truth Mission: please donate

This Ovadia is mentioned in Michaels fine Book "Judaisms Strange Gods". It seems he said on page 39 that the Six million holocaust victims (suppossed) were "reincarnations of sinners"
Apparently he's not doing good in the sayings to make friends department.

Mr. Hoffman in your book, Secret Societies and Psychological Warfare, you discuss the burning of the Wicker Man.
It has come to my attention at the Burning Man Festival this year, they burned an effigy of Wall Street.
What do you make of this?
Is the cryptocracy casting an alchemical spell onto the populace?

This man is living proof that overt Talmudic racism still stands unchallenged, especially in the Western media, who is more than willing to recite the President of the United States' mistaken position that Jerusalem is the capital of Israel as if it were known fact.

Radical Judaics are going to find themselves caught in a web of their own lies if and when more people become aware of their bizarre fanaticism.

With the pastries of Hamman and other rituals' symbolism no longer hermetically sealed, the deranged "hate speech" golem would cease upon its masters.