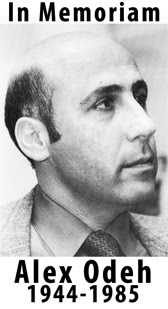 The murderers of this courageous Christian-Palestinian American can't be brought to justice because of the Israeli terror lobby. Yes, there are many Israeli terrorists. Counterfeit "Israel" was founded by terrorists of the Irgun and Stern gang. Where are Fox News, the Wall Street Journal and the rest of the media when it comes to the murder by terrorists of this American citizen? Apparently he's of the wrong religion and national origin to merit publicity, outrage or the prosecution of his killers by "our" government.

On October 11, 1985, Alex Odeh was killed when a powerful pipe bomb exploded as he unlocked and opened the door of his office in Santa Ana, California. In addition to killing Mr. Odeh, the bomb injured several bystanders.

October 11, 2016 marks the 31st anniversary of this unsolved terrorist attack.

Odeh was was a U.S. citizen, a Palestinian native and a Roman Catholic, from a family of priests and nuns. He immigrated to the U.S. in 1972.  At the time of his murder he was the American-Arab Anti-Discrimination Committee (ADC)’s Southern California Regional Director and a lecturer of Arabic Language and Middle East history at Coastline College in Santa Ana, California. Mr. Odeh was a tireless peace activist. He dedicated his life to the defense of civil liberties at home, and civil and human rights abroad. He is survived by his wife Norma and their three daughters.

Americans continue to demand that those responsible for his murder be brought to justice. ADC sent a letter to Attorney General Eric Holder urging the Department of Justice to renew their efforts to resolve the case. ADC has made a formal request for a meeting with the attorney general to discuss the case.

The FBI investigation into Alex Odeh’s murder remains open, with a reward of up to $1 million for information leading to an arrest and conviction. However, no arrest has yet been made in spite of the fact that press reports have stated over the years that the FBI identified members of the Jewish Defense League (JDL) as suspects. None of the identified JDL individuals has ever been charged or prosecuted in connection with the murder, and some have fled to the Israeli state where they have haven from prosecution.

ADC President Warren David called the murder of Alex Odeh "an injustice to his family, the Arab American community and to all Americans. After 27 years we are still outraged. We demand that the Justice Department and the FBI bring closure to this heinous act immediately."

ADC and the Arab-American community are deeply troubled that the perpetrators have been at large for nearly three decades, despite all the available leads to resolving Alex’s murder. The lack of closure of Alex’s murder by the FBI and the Department of State has been viewed as a sign that the life of an American civil rights advocate with Palestinian roots is not valued by the U.S. Government as much as other American lives.

We ask that the FBI, the Justice Department and the State Department show good faith by redoubling  efforts and allocating necessary resources for bringing to justice, once and for all, the terrorists who killed an American citizen. 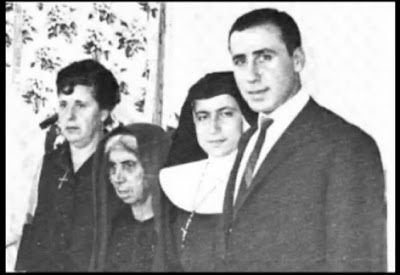 A young Alex Odeh in Palestine, with his Catholic family, including his sister, a nun.

Moses is not a Savior. The Israel of God is the Christian church. Pseudo-Israel has no place in God's kingdom, unless and until they confess Jesus as the Messiah. As it stands they are Satan's Synagogue (Rev 2:9, 3:9). They don't believe the writings of Moses, who wrote of Jesus: "For had ye believed Moses, ye would have believed me: for he wrote of me. But if ye believe not his writings, how shall ye believe my words?" (Jn 5:46, 47). How can they claim to followers of Moses and deny the very Christ he wrote about?

The idea that the present occupiers of high government offices would look into this is laughable. Maybe try next year, say after January 20? Although it may be foolish to have too much hope in a mere man, a Trump presidency would be a whole new ballgame and conspiring, murdering Khazars may have something to fear at last.