Another Israeli assault against the Name of Jesus

Romney and Obama are silent concerning this outrage

The Vandalized Abbey of Latroun

The walls of the Abbey of Latroun, just a stone’s throw from Jerusalem, have been desecrated with an insult written in Hebrew 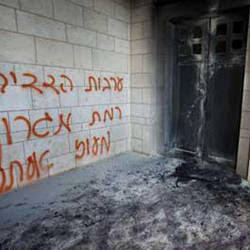 Last night, the words “Jesus is a monkey” in Hebrew were graffitied onto the wall next to the entrance of the Benedictine Abbey of Latroun, two steps away from the highway that connects Jerusalem to Tel Aviv. The culprits responsible for the offensive gesture and for setting fire to the abbey’s wooden door are extremist Judaic right-wing groups with ties to the colonial (settler) movement (which is bankrolled by American Protestant fundamentalists - Hoffman).

The Judaic assailants themselves gave away their identity by writing the word Migron under the insult, which corresponds to the name of a settlement in the West Bank which Israeli law now considers illegal...and which was evacuated on Sunday.

The Israeli police had already announced imminent attacks by violent vigilante settler “Price Tag” groups who make Arabs pay the "price" every time the Israeli government does something they consider to be against th settlers. Unfortunately, the list of mosques that have been set alight in Palestinian villages is long.

But over the last few months settlers have started specifically targeting Christians. In February, the message “Death to Christians” appeared on the walls of the Monastery of the Cross in Jerusalem, and about a week later a Baptist Church was vandalised as well. Then on August 20, 2012 there was the violent attack by a group of young settlers who vandalised a Christian residential complex in Betfage.

When the Ordinary Assembly of Catholics of the Holy Land learned the news about the hate crime in Latroun, it sent out a declaration strongly denouncing the incident. It recalled that the monastery of Latroun is visited by many Jews and that Benedictine monks are engaged in promoting Jewish-Christian dialogue according to the teaching of the Catholic Church. Catholic bishops also raised some concerned questions about what is going on in Israeli society. “Why are Christians being targeted?" they asked. “Those who sprayed their hateful slogans expressed their anger at the dismantlement of the illegal Jewish settlements in the West Bank.  But why do they vent this anger against Christians and Christian places of worship?... And why are the culprits not found and brought to justice?... The time has come for the authorities to act to put an end to this senseless violence and to ensure a “teaching of respect” in schools for all those who call this land home,” the Assembly’s declaration concluded.

This desecration of the Name of Jesus Christ, before which every knee shall bow on earth and in heaven (Philippians 2:10), is the Talmudic mentality at work.  'Christian conservatives' have nothing to say about it. Romney and Obama have nothing to say either, just as they were mute in the face of the barbaric Israeli bigot and member of the Judaic parliament who tore up a copy of the New Testament last July and called it garbage.

These aren’t hate crimes, however.  How dare anyone think that! They are perfectly understandable expressions of anguish exhibited by tormented and persecuted Survivors of The Holocaust and the children, grandchildren and great-grandchildren of The Survivors of The Holocaust, who still feel the wounds of "Christian anti-semitism” intensely, as it has burned into their innocent souls for 2,000 years — wounds inflicted because of the religion founded by that “monkey.” Let us all bow to the Talmudic settlers, beg their forgiveness, make certain they are given the entire land of Palestine, and that America bombs Iran as soon as possible. Perhaps by these means we can make restitution for the sins of our forefathers for their having believed that Jesus Christ was the Son of God and the Messiah of Israel, when in fact, as the always truthful Talmudic Israeli settlers have made clear, we should know that He was only a monkey.

(The preceding satire is really not, since it approximates the beliefs of some “buckle of the Bible belt,” Hagee and Robertson-style idolaters who worship the Israelis unconditionally and call themselves “Christians" at the same time. Some neocon Catholics are also of this frame of mind in accord with the theology of “Blessed” Pope John Paul II and the current pontiff).
_______

In response to our appeal yesterday to help support Michael Hoffman while he finishes his book on the origins of the ascendance of the Money Power in the West -- “Usury: The Mortal Sin that Was and Now Is Not” — and to help defray the costs incurred from the purchase of rare texts containing primary documentation which he has had to acquire in the course of his research, we received three donations: two from England and one from Canada. Thank you J.B., S.R., and J.D.