Rabbi refuses to testify based on Talmudic law 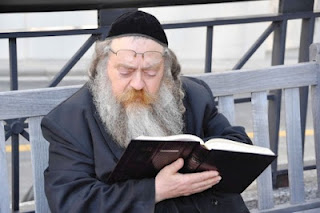 Rabbi Moshe Zigelman, a 64-year-old devout Hasid, who was ordered to jail for his refusal to testify before a federal grand jury against fellow Jews, which he believes is forbidden by his faith.

An orthodox rabbi who refused to testify before a federal grand jury, saying his religious beliefs prohibit informing on fellow Jews, was ordered jailed Friday by a District Court judge for contempt of court.

Moshe Zigelman, a 64-year-old Hasidic rabbi, was ordered to report Wednesday to a federal detention center in Brooklyn. Until he chooses to testify, he will remain behind bars up to a maximum of 18 months, according to federal prosecutors.

Zigelman has previously pleaded guilty and served a prison sentence for his role in a tax-evasion scheme by his Brooklyn-based orthodox sect, Spinka. After his release, he was subpoenaed to testify before a Los Angeles grand jury continuing its probe into the scheme.

Citing an ancient Jewish principle, Zigelman refused to testify, telling a federal judge forcefully during a contempt hearing through a Yiddish interpreter: “Because the transgression of mesira is so dire, my mind won’t change until I die.”

The rabbi had asked that he be allowed to enter custody after observing Passover, in April. Prosecutors objected, saying March will mark one year since Zigelman was first called to testify and additional delays will require extensions to the grand jury’s term of service. Morrow ordered him to surrender to the prison March 21. [End quote]

Zigelman would rather go to prison than be killed.