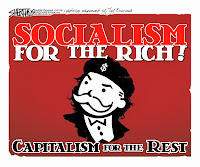 Amy Goodman reports that security for the Republican National Convention in Tampa, Florida, including 3,000 police officers, cost taxpayers $50 million. Socialism for the rich is the name of the game; Paul Ryan's "principles" not withstanding. (Check the taxpayer subsidies paid to Exxon-Mobil). 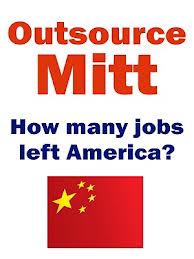 Goodman states further that workers laid off by Bain Capital, which is still in business and where Willard "Mitt' Romney still has influence, tried to meet with the Republican presidential candidate in Wisconsin to ask him to stop the continuing export of American jobs to China (2.4 million good-paying American jobs have moved to the Far East in the last decade). In Madison, Wisconsin, the Romney campaign sought to have the concerned workers arrested. In Freeport, Iowa, one of the workers, Tom Gaulrapp, stood up and asked Romney to help save American jobs. Goodman writes, "He was shouted down by the crowd, which chanted, 'U.S.A,. U.S.A.!" Gaulrapp told Goodman, "We're trying to save our jobs and we're called Communists for trying to stop our jobs going to Communist China." (Spokane Spokesman-Review, Aug. 31, p. A11). 'Patriotic' Republican goyim know that sending U.S. jobs to Red China is good for big business. Anyone who says otherwise is a commie!

Romney's sister: "A ban on abortion is never going to happen in a Romney administration" 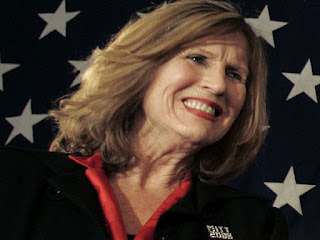 The New York Times reports that Republican women have been told to stifle discussion of abortion, homosexual nuptials and birth control: "Even those who passionately agree (or disagree) with the new party platform - calling for traditional marriage, public display of the Ten Commandments and a sweeping ban on abortion - were unwilling to discuss it. (An exception was Mitt Romney's sister Jane who declared that a ban on abortion is 'never going to happen in a Romney administration." (Aug. 31, p. A16). For decades, since the Ronald Reagan era, the Republican party playbook has been to patronize social conservatives in the party platform on issues such as abortion — and then, upon taking office, do little or nothing for the cause. 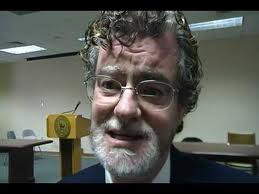 Mr. Potok is the Zionist extremist who is the media's anointed "authority" on extremism from his snooper's perch at the Southern Poverty Law Center (SPLC). Potok's spy shop labeled the Family Research Council (FRC) an "anti-gay hate group," after which a "gay" activist allegedly shot a guard in front of the Council's Washington D.C. offices. While some renegade Amishmen who cut other Amish people's hair and beards have been charged with a hate crime, the guy who police say shot up the Family Research Council, is not charged with a hate crime enhancement.

Potok and his espionage group have lost none of their credibility, even after helping an alleged pro-homosexual shooter find a target for his hatred. The alleged shooter had allegedly been volunteering for about the past six months at "The DC Center for the LGBT" ("Lesbian, Gay, Bisexual, Transgendered") organization (which has a branch on the campus of Catholic Gonzaga University under Bishop Blaise Cupich). Potok's organization states, "The SPLC has listed the FRC as a hate group since 2010 because it has knowingly spread false and denigrating propaganda about LGBT people."

The SPLC has been knowingly spreading false and denigrating propaganda about World War II revisionist historians for years. But truth is not the point. Potok's mission is to demonize and criminalize the political rivals of Left-Zionism. Fairness, ethics and human rights are merely cynical rhetoric employed to achieve that goal. Potok's group persecuted Alabama Chief Justice Roy Moore for seeking to defend the public display of the Ten Commandments. Moore lost his post in part due to the SPLC witchhunt. Sixteen days after an alleged shooter fueled by Potok's libel opened fire on the Family Research Council, New York Times reporter Robbie Brown wrote, "Those are only the latest and most visible examples of the rise in violent militia groups in recent years, said Mark Potok, an authority on the groups and the editor of the Southern Poverty Law Center's Intelligence Report." (Aug. 31, p. A19).

Potok is immune from criticism from the "gay" New York Times and almost the whole of the mainstream press. Potok is an extremist hater of Bible-faithful Christians, yet throughout the establishment media he retains his status as a watchdog "authority" on "extremism" and "hate." Sixteen days after the attack on the Family Research Council, the NY Times can't recall it in connection with Potok's group. Violence against conservative Christians incited by thought cops like Potok is not an issue for the New York Times. 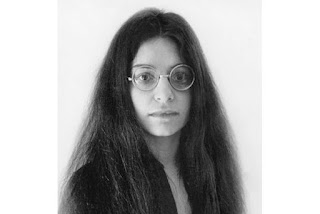 This radical feminist went by the name "Shulamith Firestone." The New York Times accorded her a lavish, three-column obituary accompanied by her photograph (Aug. 31, p. B14). Firestone was insane. In her 1970 Marxist book, The Dialectic of Sex, she argued that the end goal of the feminist  revolution must be the elimination of genital differences, and that "sexual inequality springs from the onus of childbearing." In other words, a woman's natural capacity for giving birth to children is the source of gender "inequality." Her perverse remedy for this "dreadful predicament" is coming to fruition in our time: "In the utopian future Ms. Firestone envisioned, reproduction would be utterly divorced from sex; conception would be accomplished through artificial insemination, with gestation taking place outside the body in an artificial womb."

Reviewing The Dialectic of Sex in 1970 in the Times, John Leonard wrote, "A sharp and often brilliant mind is at work here." In the 1980s Miz Firestone was hospitalized with schizophrenia, which "had overtaken her...She sometimes recognized on the faces of others joy and ambition and other emotions she could recall having had once, long ago. But her life was ruined and she had no salvage plan." The Times states that Firestone's book, The Dialectic of Sex, "remains widely taught in college women's-studies courses."

Firestone had an Orthodox Judaic upbringing in Kanas City and St. Louis, Missouri. Orthodox Judaism is guided by the misogynist Talmud. Other prominent and influential radical feminist intellectuals include Gloria Steinem (granddaughter of Pauline Perlmutter), campaigner for abortion and "LGBT rights"; Bettye Naomi Goldstein ("Betty Friedan"), founder of the National Association for the Repeal of Abortion Laws, as well as the National Organization for Women (NOW); and Andrea Dworkin, author of Intercourse. Dworkin was "critical of consensual sex between women and men, which she saw as an act of everyday subjugation in which women were accomplices." (NY Times, April 12, 2005). "...her most notorious work, Intercourse (1987), which finally brought Dworkin to popular consciousness...held that intercourse 'is the pure, sterile, formal expression of men's contempt for women." (NY Sun, April 12, 2005). The NY Times observed: "...(t)hreatened by this Jewish girl from Camden, N.J., the minions of the status quo moved to destroy her credibility and bury her work alive." (Times, April 16, 2005). According to the New York Sun, "Dworkin credited her Jewish heritage, including relatives who were Holocaust survivors, for making her aware of human suffering and sexism...She characterized her first experience of oppression as the result, in elementary school, of her refusal to sing Christmas carols, which led to anti-Semitic graffiti and official punishment." (NY Sun, April 12, 2005).

Bernanke intends to print more money
Federal Reserve Board Chairman Ben Bernanke is apparently intent on creating more dollars later in September to ease unemployment. Refusing to call it money creation, which would strike the public as too bizarre, the god-like power to create wealth is disguised by the corporate media with the euphemism, "quantitative easing." The media are partners with the Fed in this deceitful cover up of the debasing of the currency. Bernanke was appointed by George W. Bush and has been kept in office by President Obama; hence, he's a creation of the two-party, no-choice, money power monopoly.

"Lenin was certainly right. There is no subtler, no surer means of overturning the existing basis of society than to debauch the currency. The process engages all the hidden forces of economic law on the side of destruction, and does it in a manner which not one man in a million is able to diagnose." - John Maynard Keynes.
______________

"the god-like power to create wealth...". Inflation is actually wealth transfer, from the low-income and middle classes to the rich elitists, not wealth creation.

Inflation is a result of printing money, i.e. "quantitative easing;" although today the money is just digits on a computer screen.

This is the mother of all sterility.

Inflation devalues preexisting money. Because rich utilize smaller percentage of their money for consumption than poor, therefore rich are less affected by inflation than poor. Old maxim "money begets money" is on their side.