Where are the “Hate Crime” laws when we need them?

The vital information freely distributed in today's On the Contrary is made possible by donations from readers and the sale of our books, newsletters and recordings

Michael Hoffman's Note: The American media stink. I'm not apologizing for using a crude term to describe the "journalism" of the NBC and CBS television affiliates in Sacramento and the Sacramento Bee newspaper, or most of the other "mainstream" media in the U.S. Their reporting of the truly dissident and marginal is usually a disgrace. Here is the latest egregious example, highlighted by retired Army officer Archer Frey, who commanded troops during the 1965 Watts Riots in Los Angeles. (Michael Hoffman is a former reporter for the Associated Press).
__________________________________________________
Where are the “Hate Crime” laws when we need them?
By Archer C. Frey  archerfrey@gmail.com

• Exclusive to The Hoffman Wire | www.revisionisthistory.org •

On 27 February 2012, the popular 4:00 p.m. Dr. Oz medical information television show was interrupted to transmit live pictures of a near riot occurring at the California State Capitol building in Sacramento, California. The local NBC-TV affiliate showed police under siege, using horse-mounted California Highway Patrol officers and Sacramento City motorcycle police officers, in attempting to suppress a riot brought on by the activities, so the media outlet said of a “White Supremacists” group activity.

Both the NBC and the CBS stations fed live pictures and later taped segments at the 5 o’clock and 10 o’clock news. In their voice over narration both NBC and CBS repeatedly use the term “White Supremacists”. While there were some short acknowledgments (no amplification), that the South African Project Group had valid permits, and a mob from the “Occupy Oakland” movement was attacking the South African group, both MSM outlets made it clear that the problem was with the South African group for being there in the first place. Both MSM repeatedly use the statement “White Supremacists.” The authors of the Sacramento Bee article used the white supremacists canard only once, but put it into a form of denial, reporting; “The South Africa Project protesters denied they are white supremacists.” However the Bee could not resist one last jab in the picture description calling the South Africa Project group a “pro-white group.”

So much for objectivity.

While Californians are aware of the distances involved, those outside of the state are not aware that Oakland is over 80 miles from Sacramento. (For comparison New York City is a little over 90 miles from Philadelphia.)  So to move a group of some 100 people, headcount underestimated, or inflated, depending on your goal for media impact, some eighty miles takes a good amount of coordination. No MSM or the Sacramento Bee article, see below, mention this fact.

The near riot closed downtown Sacramento and the Capitol from around 3:00 p.m. in the afternoon until nearly 6:00 p.m., stopping traffic and closing off entire city blocks, yet the Bee relegated their article to page 3. It took the paper some 228 words of a 676 word construction, or one-third of the article, to inform the reader that the South African group had a permit. Nor were viewers and readers reprised of the violence in Oakland caused by the “Occupy Oakland” element, including the January 28, 2012 incident where police had to resort to the use of tear gas. The MSM and the Huffington Post all reported that the core element of the Oakland trouble resulted from some 100 individuals that refused a lawful order to disperse.

One wonders if the 100 or so in Sacramento might be this same 100 strong element? As an aside, this Oakland use of tear gas was the first time that I recall its large scale California use since the “People’s Park” Berkeley riots of 1967. Notice that the media emphasis is on the harm to the police. No mention, let alone expanded coverage, of what happen to the group assembling legally, except, “the counter-protesters hurled bottles, rocks and paint-filled eggs at the officers and those they were protecting …”

But the bigger problem is in the application, or in this case, the non-application of the 2000 era, ADL, (Anti-Defamation League) instituted “hate crime” laws.

The call for investigation and the potential for “special circumstances” and “hate crime” conditions is totally absent.  If you are not part of an identified “victim” group you have no special circumstances to wrap around your rights. A mob can attack your authorized, permitted, constitutionally protected assembly and those attacked are just supposed to “suck it up” and let it go.

Truly, we are now under the control of malevolent forces.

[Archer Frey's Note: No mention in the following newspaper report of any injuries or harm done to the peacefully assembled, law-abiding group that was violently attacked by the hate-filed mob]

A mini-melee broke out near the state Capitol on Monday, with at least two officers injured and three people arrested, after Occupy Oakland protesters and others hurled objects at police and at a group claiming thousands of whites have been killed by blacks in South Africa. The protest by South Africa Project began relatively calmly. At noon, members took up position on the Capitol’s south steps for a three-hour protest of what they called “White Genocide in South Africa.” Their literature claims that as of December, more than 3,000 white farmers of European origin had been murdered in South Africa in racially motivated attacks.
Meanwhile, a multiethnic group of about 100 protesters was separated from them by police officers on horses. Those protesters chanted: “Hey, hey. Ho, ho. You Nazi f---s have got to go.
”
The South Africa Project protesters denied they are white supremacists. “For some reason, when a white person tries to stick up for an issue based on race, they’re automatically labeled racist, neo-Nazi Klan members,” said coordinator Michael Myers, an electrician from Oakland.

The group’s website, which later proclaimed the demonstration a success, chided “those of you who call yourselves White Nationalists” who didn’t participate.

At times the protesters and counter-protesters shouted back and forth, said California Highway Patrol spokesman Sean Kennedy. “I heard yelling from both sides,” he said. “It was mutual.”

The officers kept the counter-protesters – including those who arrived later marching under a banner that said “Occupy Oakland” – on the opposite side of the street. Some wore dark bandanas over their faces.

“It’s the wild, wild West, motherf-----s,” they chanted. “The system is racist, you are all disgraces.”
As both groups approached the parking garage, the counter-protesters hurled bottles, rocks and paint-filled eggs at the officers and those they were protecting, according to Kennedy and Sacramento Police spokeswoman Laura Peck.

One CHP officer, sitting on a large draft horse, rode into the crowd of counter-protesters while other officers tried to apprehend those they suspected of throwing objects. The group scattered, with police in pursuit. One CHP bicycle officer chased down and tackled a fleeing suspect, but he appeared to be injured after the man was handcuffed and taken away. Sitting on the sidewalk, the officer had blood on his chin and pointed to his knee, as if to indicate he was hurt. Another CHP officer held his hands over his face while colleagues put their hands on his shoulders. An ambulance driver said the officer had been pepper sprayed.

Kennedy said Monday evening that at least two CHP officers suffered minor injuries and at least three counter-protesters were arrested by the CHP for resisting arrest. Another counter-protester was arrested earlier in the day, he said. Peck said no Sacramento police officers were injured, though some were doused with paint. The ruckus drew a heavy police reponse. It snarled traffic and disrupted service on light rail’s Blue Line from 3 to 4:30 p.m., a Regional Transit spokeswoman said.

As news of the event spread, organizers of Occupy Sacramento said in a statement they were not involved. “Occupy Sacramento adheres to a strict nonviolence policy,” the statement said. “We do not fight police, even if they are the perpetrators of violence, as they have been at Occupy demonstrations.” One Occupy Sacramento protester at the scene, who goes by the name of Faygo, said it was after the Occupy Oakland protesters arrived that things got rowdy.

“I can’t really blame Oakland,” he said. “They deal with a lot of police brutality, so a lot of them have a lot more animosity toward the police.

“It just takes one person to throw a stone,” he said, “and you’ve got chaos.” 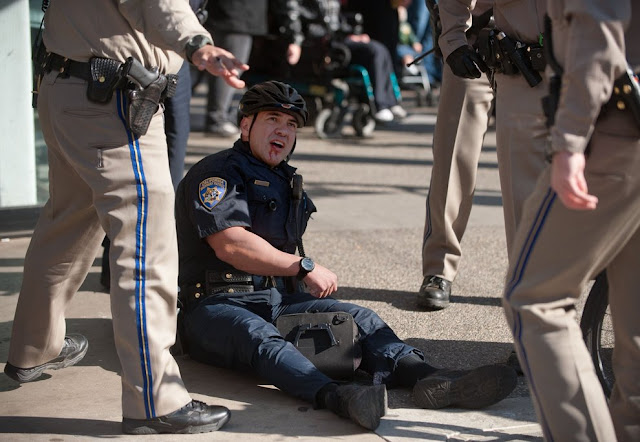 The TRUTH will set you free,but it will also get one fired from the paper.

Ah, hate crimes. Let me say this about that: We must keep a close eye on such organizations as the ADL and the SPLC. Abe Foxman and Morris Dees would like nothing more than to do an end run around the Constitution and turn this country into Canada, where homosexuality, in all its foulness, is ascendant, perceived as chic, and enshrined as a social good. And let's not forget about "Holocaust denial" (horrors!), proscribed by law in Canada and 16 other countries: Austria, Belgium, the Czech Republic, France, Germany, Hungary, Israel, Liechtenstein, Lithuania, Luxembourg, the Netherlands, Poland, Portugal, Romania, Slovakia, and Switzerland. Ponder what happened to His Excellency, Bishop Richard Williamson, for speaking truth to the power of Holocaustianity. If we so permit (and we appear to be doing just that), Foxman, Dees, and others of that kidney will soon introduce in the U.S. the same woe and wreck and ruin.