Capsule review of “Bridge of Spies”

Capsule review of “Bridge of Spies” 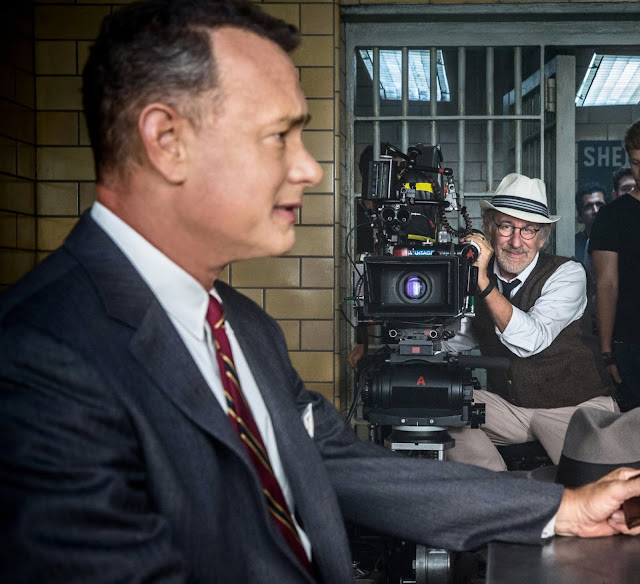 Mr. Steven Spielberg is a consummate cinematic craftsman and this movie is another of his minor masterpieces: a study in character, the herd mentality and standing up to authority. The acting, sets, costumes, cinematography, lighting and casting are superb. This is a complete film with an opening, middle, conclusion and epilogue. That may seem a pro forma requirement for any major movie, but it’s a tall order for many contemporary filmmakers who are churning out movies that resemble half-baked ideas, and sketches stretched to fit 100 minutes, rather than complete narrative tales like “Bridge of Spies."

Tom Hanks portrays Jim Donovan, a highly ethical Irish-American attorney who defends a Soviet spy, “ Abel" (played by Mark Ryland with the same quiet dignity he brought to his portrayal of Thomas Cromwell for the BBC).

The film’s most outlandish propaganda is a matter of omission rather than commission. Hanks is besieged by the prosecutor, judge, police and people in the course of defending the communist Abel against the American Cain. Spielberg erases the significant pro-Soviet Left in America at the time whose numerous members based in New York (where the case is centered) would have surely contacted Donovan to offer assistance and support. It would have cost Spielberg next to nothing thematically to have shown a few shabby, obnoxious National Lawyers’ Guild types showing up on Donovan's doorstep with advice. The attorney could have been portrayed as dismissing them with contempt and Spielberg would have acquitted himself of denying a massive fact of 1957 American society: the existence of a powerful Old Left entrenched in the Judaic areas of the cosmopolitan east coast. He didn’t bother to acknowledge this reality. His movie shows Hanks’ character toiling in a sea of a right wing paranoia fully in possession of American society, with no dissenters, save one. Hanks’ Donovan character is the lone dissenter and that’s not only ridiculous, it renders the movie a fantasy; seriously detracting from its credibility. Will the American public notice in 2015? Probably not. This is an entertaining film which will gain a reputation as “thoughtful” and “inspiring” with its message of humane mutual respect between adversaries.

Another Spielbergian propaganda turn is found in his portrayal of the East German soldiers in the film: their haircuts, uniforms and demeanor clearly telegraph an identification of them as (post-war) Nazis, despite the fact they work for the Communists. Some Zionists will watch the wind-up German troops in "Bridge of Spies” and mutter, “The Germans never change.” Spielberg can’t seem to get a grip on his ethnic frenzy when it comes to WWII-era (and beyond) German soldiers. As in "Schindler’s List” (replete with its counterfeit Talmudic quote which became the movie’s motto), Spielberg the falsifier has a compulsion to stereotype them as evil automatons. Meanwhile, the evil Judaic Communist who was their superior in real life, East Germany’s Stasi Secret Police Counter-Intelligence Chief Marcus Wolf, the fiend who ordered the killing of Germans attempting to escape to the West over "The Wall”  (the would-be escapees are graphically depicted being machine-gunned in “Bridge of Spies”) is of course never mentioned or identified. (At the risk of being accused of being a pinko, I will hazard the guess that if Communist East Germany were still in existence it is doubtful that they would be so mentally defective and morally degenerate as to welcome thousands — much less hundreds of thousands —  of mainly young, uneducated and angry Islamic male migrants from Sudan, Syria and parts unknown;  anymore than Putin’s Russia does).

"Bridge of Spies” depicts American school children filled with fear bordering on panic over the likelihood of nuclear war with the Russians. As a child of the 1950s I can testify that I witnessed no such serious bouts of anxiety. We were as children exposed to nuclear war scenarios, but most of us were fascinated by the technology exhibited — science fiction come to life — rather than fearful of it. Perhaps it’s impossible for 21st century denizens to believe it, but in the late '50s we were too snug in our cocoons of small town security and peace to have seriously entertained the probability of nuclear attack. The prospect was too remote from our daily lives to effect us in the way Spielberg portrays. Adults built bomb shelters and some went to extremes. It was not an issue for me or my chums however, contrary to what Spielberg’s screenwriters (among whom are the Coen brothers), seek to convey.

It is true that for a few days in October of 1962, when President Kennedy challenged Nikita Khrushchev over the Cuban Missile Crisis, I recall my worried mother, who had a high level security clearance as a civilian employee of the Department of the Army, gathering us in our living room to pray on our knees for peace. Did she know something we didn’t? If so, even the gravity of her heavenly petition did not translate, in the mind of us kids, into anything approaching hysteria.

Spielberg’s Judaic religious fanaticism shows forth in a small way. The iconography that would have typically been on display in the Catholic home of Irish-American Jim Donovan in the 1950s —  crucifixes and pictures of the Blessed Virgin Mary —  are absent from the interior of the Donovan house in “Bridge of Spies." The set was perhaps denuded of these Catholic artifacts in keeping with Mr. Spielberg’s Orthodox Judaic revulsion for them, as recently personified by Pope Francis, who covered his pectoral crucifix with his hand as he bowed in deference to the bigotry of a visiting Orthodox Judaic lady in the Vatican (other Catholic clerics hide their crosses in the folds of their gowns before meeting Talmudic Zionists).

The unlovable hardcase who plays the lead CIA agent in the film is named “Hoffman.” Hanks’ character makes a point of telling Hoffman that he has a German name and that he is a German. Watching the credits at the end of the film we checked to see what full name Spielberg had assigned to “Hoffman.” There was none. In the cast of characters actor Scott Shepherd is simply listed as “Hoffman.”

Spielberg has wielded his powers of cinematic thaumaturgy to lionize Jim Donovan, on Spielberg’s terms, of course. Would that we had one so talented among us, to bring to the silver screen the dramatic biographies of men like Doug Christie, Robert Faurisson, David Irving, Germar Rudolf, Leuchter and Zündel.

"A lustreless protrusive eye
Stares from the protozoic slime
At a perspective of Canaletto.
The smoky candle end of time…"

Spielberg is a propaganda master, no doubt.
Just a note to th eGDR soldiers (Ia haven'st see the movie though):
The East German army was in fact very Prussian, uniforms, helmet and a lot of traditions actually were taken from the Wehrmacht, I consider it the last German army in terms of discipline and capability

The late German-American author and activist Hans Schmidt (“Jailed in Democratic Germany”) was of the same opinion.