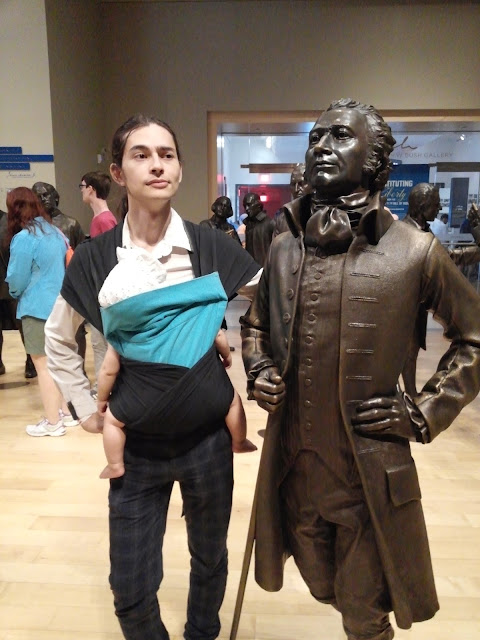 James T. Griffin, a young Asian-American and "traditional" Catholic, formerly of Texas and now based in a suburb of Philadelphia, Pennsylvania has called for the burning of a white city in Mississippi as well as the destruction of our nation's capitol.

Mr. Griffin, a recent guest on the traditional Catholic "Radio Maria" program (http://radiomaria.us/april-28-2015-3/), in a July 4 entry for his “Modern Medievalism" blog, wrote the following:

"After my affirmation of the elitist sentiments of Hamilton, Carroll, and other men of the founders’ generation, you might be surprised that I’m also somewhat sympathetic to the opposite view. Especially after the recent massacre in Charleston and the ensuing burnings of black churches as though it were the 1950’s all over again, I have a deep admiration, and am even perplexed, by the unending patience and forgiveness of the black communities in the South after continued offenses.

" It confuses me to this day, for instance, why, after the murderers of Emmett Till in 1955 openly admitted to the deed after their acquittal in an interview, that whole buses full of black Chicagoans didn’t roll down to Money, Mississippi and burn the entire town to the ground.

" If I were a black American, I’d instinctively lean closer to Malcolm X than Martin Luther King: that peace in our time is impossible, that not only the Stars and Bars but even the Stars and Stripes should be torn down, and that there should be no compromise with a government whose houses in Washington are literally built on the backs of black slave labor. Let the entire city be razed to the ground and built anew.” 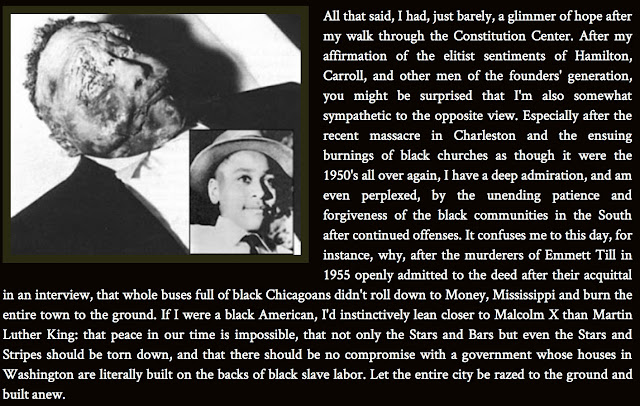 One can only imagine the uproar from the Establishment media, Zionist ADL and Southern Poverty Law Center, which all claim to track "hate," if Mr. Griffin were a white Catholic calling for "burning to the ground" a predominately black city in Mississippi, and for Washington D.C. to be "razed" (completely destroyed).  Hatred and incitement to violence of this magnitude would likely garner national publicity. The white man as moral leper caricature would be reinforced.

But since the Catholic blogger's targets are white Mississippians and the nation's capitol in the context of African enslavement, it forms not a blip of outrage from even the local media.

Demented persons are not confined to the ranks of white Conservatives. It's just that the media will not typically publicize the dementia of anti-white-bigots. Non-white incitement to mass murder is not allowed to register in the documentary record. Mr. Griffin's outburst will probably be ignored.

Memo to Griffin and the U.S. media: the claim of  "unending patience and forgiveness of the black communities" toward whites can only be maintained when the hate crime statistics are rigged  (as indeed they are ) and the epidemic of rape, assault and murder of whites by blacks is classed merely as "random violence."

In many cases, even when such attacks are accompanied by racist, anti-white remarks, the police will not categorize them as hate crimes. We have the false perception of the "unending patience" of black people in the face of "white evil” because black-against-white rapes and murders are excluded from the category of hate crime.

Those who nurse genocidal resentments against white Americans should take up residence in sub-Sahara Africa, in nations like Nigeria or Sudan, and see how long it would take for them to zoom back to the USA, grateful to live in a land where a white majority has granted unprecedented rights to a black minority which have seldom been conferred by rival tribes in Africa.

In the meantime, a "traditional" Catholic can condone the murder of white civilians and the "equality" and "human rights" crowd could not care less.

Interesting find from the TradCatholic blogosphere. This guy's blog is actually well put together and contains a good deal of interesting historical information about medieval England - but clearly Griffin is ultimately a moron to have made statements like he did unless he secretly wants American blacks to go on violent racist rampages against whites in which case Griffin is malevolent.

Pouring through his blog anecdotally shows what I have found through personal experience now attending the Latin Mass with kids of my own and having grown up in a TradCatholic atmosphere. It is that a substantial segment (20% let's say) of Traditional Catholics are caught up in a 'Renaissance Fair' mentality trying to raise up customs and a life style that was gone 300 years before Vatican II convened - you have another block of them fighting against modern kulchur by intentionally dressing like frum orthodox women. Many 'traditional' Catholic women have virtually the same politics regarding sex and male/female relations as rabid feminists (aside from permitting abortion).

One other point - if we go tit for tat, black vs. white - if American blacks feel themselves entitled to exact retribution on white people - while there were other causes which made blacks simply the tools of more malevolent forces, American blacks were the 'street level' 'grass roots' cause of the destruction of every older, major American City from Detroit to Chicago to Philadelphia.

If Griffin holds American blacks can burn down a city in Mississippi for the brutal murder of one man - then what retribution is due black people for having burned out, stabbed and shot through every white Catholic ethnic neighborhood that ever existed in Philly. A lot of people do not know what happened to Philly the way they know Detroit - but Philly was as bad. For Griffin to be standing in that city making the statements he did . . .

I wasn't made aware of this post of yours until today, but this is, shall we say, a highly selective reading of my article on English liberty! Clearly, in the context of the article, I was speaking of my failure to understand the black community's docility in the face of such blatant injustices in the 1950's.

At any rate, I find it curious that you chose to characterize me as Asian-American, which is true enough, but I'm also as white; to be specific, an Anglo-Saxon of southern American stock; as anything else. As a convert, I have more Anglo-American ancestry than most Catholics, "traddy" or otherwise. Among my ancestors are Confederate veterans of the Civil War and at least eight Patriot veterans of the American War of Independence, some of whom were slaveowners. One was a founding father of the State of South Carolina. One of my 4th-great-uncles fashioned Robert E. Lee's spurs. If I really wanted to exterminate white southerners, I'd be calling for my own death... and suicide, as we all know, is a mortal sin.

Why does this not surprise me?