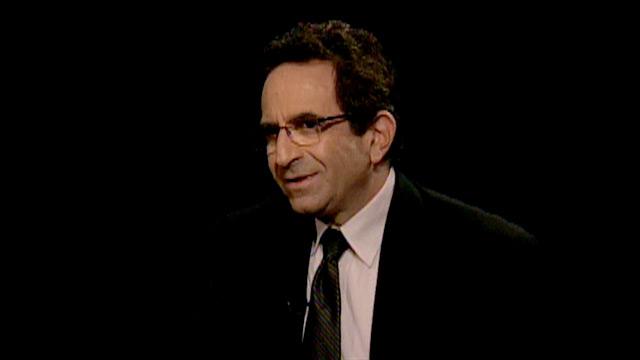 Edward Rothstein is a public intellectual whose oracular writings are found throughout the canonical journalism of the American Establishment: the New York Times, Wall Street Journal (where he is “critic at large”), New Republic, New York Review of Books.


Mr. Rothstein is a mole within the “Conservative” movement. He cuts an impressive figure in decrying the process whereby the West engages in "...confessions of guilt, gestures to make recompense, and shamefaced withdrawal from the exercise of power and self-interest. Such a perspective, though, is deeply flawed. Imperial desires, slavery and exploitation have been hallmarks of every powerful culture and are hardly unique to the West (more unique, in fact, is the West’s abolition of slavery).”

All well and good you say. But in the same essay from which we excerpted the preceding (Wall Street Journal, July 18, p. C-7), we find this omission-laden revelation of the sort of “Conservatism” Rothstein is supposed to represent. He writes:

"...the far-flung explorations that characterized early modern Europe were not undertaken just to attain power and riches; they reflected a desire to illuminate the unknown, to comprehend the universe and map its qualities, to discover not just novelties but fundamental principles. They involved a kind of nervy geographic universalism.”

Let us endeavor to learn from this sage. According to Rothstein, European business, colonies, exploration and military power were projected around the world in order to:

Mr. Rothstein has included everything but the kitchen sink in his list of motivations for why Europeans extended their influence and power across the globe. This falsified version of history is the emerging status quo in the campaign to put forth a deracinated, sterile, secular distortion of our heritage which passes for history these days and which has absolutely nothing to do with Conservatism.

Dare we say it? Rothstein wields a Judaic airbrush as he refuses to attest to the great Christian missionary mandate as the overwhelming primary motivation for western European exploration from the Middle Ages into the late 19th century.

Rothstein can’t bring himself to credit Christianity’s mission to bring the Gospel to the heathen as playing any significant part in Europe’s global “exploration.” Cortes conquered Mexico for reasons of “geographic universalism.” The Puritans settled New England to “discover…fundamental principles” (not having any “principles" of their own).  The Jesuits opened up China, Japan and India to “attain power and riches.” The Boers settled southern Africa “to illuminate the unknown.”

Rothstein is an agnostic when it comes to Christian evangelism, the main motive for European exploration, and with the commissar-like authority invested in him by the Establishment press, he simply eliminates the rich history of our heritage. The resulting vacuum is presented to the trusting kiddies who are eager to imbibe muscular, red meat Conservatism as an antidote to the detractors of our western civilization. But how can a detractor like Mr. Rothstein serve as an antidote to detraction?

Michael Hoffman is at the author of Judaism Discovered, They Were White and They Were Slaves, The Great Holocaust Trial, Usury in Christendom and four other books of history and literature. His columns are funded by donations from readers.

Who is the mole? Pretending to be Christian is worse, at least this guy is admittedly a jew. You know very well Christianity was a cover for practical interests, just like England was bringing enlightenment to India and America bringing democracy to everybody. Europeans got very good at exporting ideals in return for resources and slave labor. You and E Michael Jones are the worst, at least Rothstein is not a fake Christian. Scum.

And who are you, who is too cowardly to comment under your real name, to judge whether Michael's professed Christianity is sincere or not?