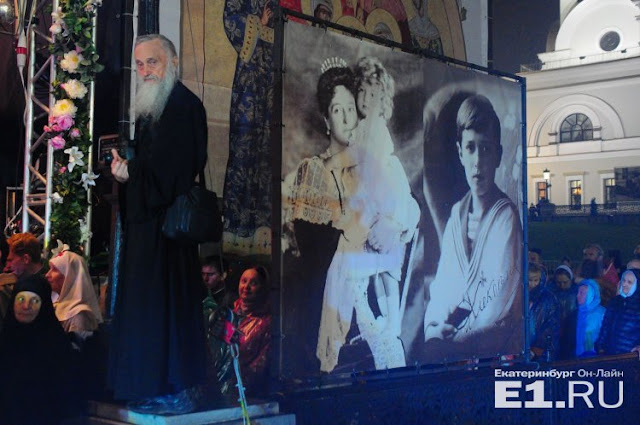 60,000 Christians in procession in Russia to commemorate the murder of Tsar Nicholas II
and his family in July, 1918 by Judeo-Bolshevik terrorists

More inspiring photos of the holy pilgrimage are at this link:

The following note was sent to us by by an Arab-Christian:

Greetings in Christ our Savior,
I am impressed by the Russians' piety and strength: 60,000 pilgrims (including from Japan) walking in a procession for four hours in the rain and on unpaved roads, going from the Church on the Blood, where the Tsar and his family were martyred, and walking all the way to the monastery dedicated to the Tsar's memory, close to the mines where his body and that of his family were doused with sulfuric acid, burned, and dumped down the mine shafts.
I noticed a photograph of a large icon at the front of the monastery with an image of Tsar Martyr Nicholas II on it. It reads in Russian, "Forgive us, our Sovereign" (Прости нас, наш государь).
Yes, may God grant that Russia will repent soon and fulfill her mission to the world. Amen, may the faithful remnant of the orthodox Christians in Russia and all the world be the leaven to spread the true Gospel to the four corners of the earth before the end.

I believe in Karma, what goes around----comes around. Marx let the cat out of the bag. It was "Kill or be killed".

The cowardly "preachers" and clergy in this country are too damn concerned about the tax exempt status of their "churches" to preach the Gospel in season and out. Like the "well regulated Militia" called for in the Second Amendment, we need a "call to arms" from the to reactivated Black Robe Regiment last heard from in colonial America.