As background to yesterday’s tragic events in Jerusalem, Prof. Daniel McGowan of Deir Yassin Remembered, has confirmed that the Jerusalem synagogue where the attack on the rabbis occurred, is located on land in the Hasidic Har Nof district of West Jerusalem, that was stolen from the Palestinians 66 years ago.

Har Nof is on the site of the Palestinian village of Deir Yassin, which was obliterated by Israeli “ Irgun" terrorists on April 9, 1948. More than a hundred Palestinian men, women and children were systematically murdered and the village was razed, so that in 2014 Talmudists could worship themselves in a synagogue, on a site where civilians were massacred and then completely forgotten by a ‘Holocaust’-obsessed world. (“Holocaust" saint Elie Wiesel served as a propaganda writer for the Irgun).

The NY Times, Wall Street Journal, CNN, CBS, Fox,  ad nauseam, report none of this, even as they express hypocritical outrage that Putin’s Russia is opening more of what they term “propaganda” media outlets around the world; toward their own propaganda they are utterly indifferent.

We detect certain familiar leitmotifs in media commentary on the attack at the synagogue, representative of theological doctrines and fixations of the religion of the Talmud. Yossi Klein Halevi, “senior fellow at the Shalom Hartman Institute in Jerusalem,” writing in today’s Nov. 19 edition of the Wall Street Journal (p. A13), states: “Nothing Israel does or doesn’t do is responsible for provoking young Palestinians to hack to death Jews in prayer."

It is an article of Talmudic faith in these cases of violent interaction with non-Judaic, oppressed populations, that Judaic persons are the blameless targets of the blind hatred of irredeemably evil goyim.

This formulaic belief is imparted to Orthodox Judaics from their youth: they are of Jacob and all of their enemies are hate-filled scions of Esau — “It is a given law: it is known that Esau hates Jacob” ("Halacha hi beyoduah she’Eisav soneh l’Yaakov”).

2100 Palestinians victims from the summer of 2014 rendered invisible: 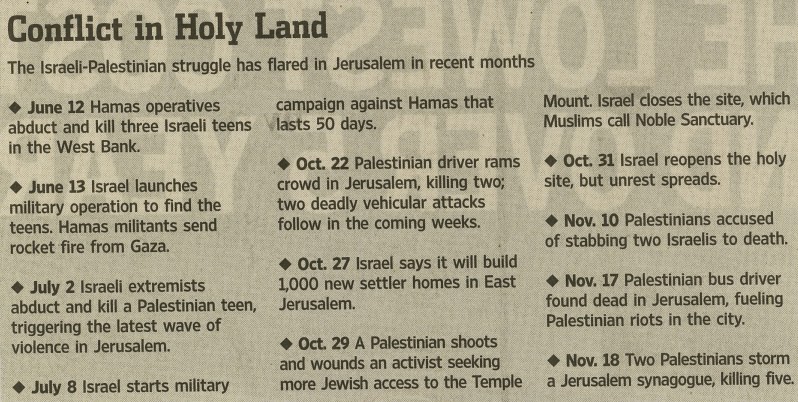 Hence, as Mr. Halevi insinuated, the Palestinian “Esau" hates without foundation and for no reason, other than the fact that he is constitutionally unable to stop hating "Jews.” Therefore, no crime the Israelis commit against the "Esau-Palestinians," such as the enormous slaughter this summer (now all but forgotten — cf. the graphic above, titled “Conflict in the Holy Land” on p. A8 of today’s Wall Street Journal,) can be part of the victim equation.

The 2100 dead Palestinian “Esaus" are not victims worth remembering, simply because their lives are worth next to nothing.  Is this an “anti-semitic canard”? If so, was it this writer that made those 2100 dead disappear from almost all news reports that wrote of the motives that led up to the synagogue attack?

If the 2100 were truly regarded by the controlled media as human beings, then their recent deaths would be included, as part of the in-context background reporting on what contributed to the attack on the rabbis on Nov. 18. Norms of journalism in the US are suspended however, when the dogma of Judaism requires it. What is required is that the lives of the four dead “Jacob-rabbis” be shown to be of infinitely more value and significance, than the lives of the now largely invisible 2100 dead Esaus.

Not that Americans are not outraged when certain religions engage in superior/inferior dichotomies. The Cryptocracy has given permission to the media and the churches to fill the airwaves and the pulpits with intensive discussion and study of the low status of non-Muslims — the so-called “Dhimmi.” Churches both conservative Protestant and traditional Catholic, have expressed outrage at the inferior status allegedly assigned to them by Islam.

Yet every one of the goyim, from the wretchedly dehumanized Palestinians, to the testosterone-fueled, super-patriot American “friends of Israel,” are all Esau in the eyes of Orthodox Judaism. This is not a cause for concern or alarm however, for either the Church, “our” media, or most Americans. There is instead an incredibly dopey faith in the benevolence of the religion that arose on the premise that the Son of God deserved to be killed. The rot that infects our nation is deeper than we can imagine.

From Noam Chomsky's The Fateful Triangle:

"Perhaps the most remarkable illustration of the ability to efface atrocity concerns Deir Yassin, where 250 people were murdered by Begin’s Irgun and LEHI in April 1948 (see section 2 above). A year later, Ha’aretz reported the “settlement festival” for religious settlers who were founding Givat Shaul Beth (now part of Jerusalem) in “the former village of Deir Yassin.” Ha’aretz reports further: “President Chaim Weizmann sent his greetings in writing...the chief Rabbis and Minister Moshe Shapira took part in the ceremony...the orchestra of a school for the blind played...”212 In 1980, the remaining ruins were bulldozed to prepare the ground for a settlement for Orthodox Jews. Streets were named after units of the Irgun which perpetrated the massacre, and of Palmach, the kibbutz-based strike force of Haganah, which took part in the operation but not the massacre. These units were to be “immortalized on the site,” in the words of the Israeli press.213 More recently, most of the Deir Yassin cemetery was bulldozed to prepare the ground for a highway to a new Jewish settlement.214

Nahum Barnea writes that “at first Deir Yassin was forgotten. Now it is celebrated.” He describes a (to him, horrifying) tour to Deir Yassin organized by the Society for the Protection of Nature, perhaps, he sug- gests bitterly, because “nature was the only thing not destroyed there on April 9, 1948.” The tour (an annual event) was led by a former Irgunist, who whitewashed the operation before a largely passive audience.