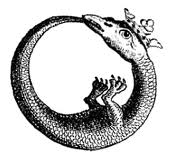 Once and Future Terrorism
©2013 by Michael Hoffman

Strange that a terrorist would be subscribing to a newspaper that warns its readers that terrorism is too often a US government false flag operation against its own people.

The report, in the August 6, 2013 Wall Street Journal, titled "Bombing Suspect Steeped in Conspiracies," brings us full circle, with the serpent consuming its own tail by pointing to its unmasking in the pages of the American Free Press -- daring us to act on the directional signal it is providing about itself -- and if we do not, then the serpent's coils are made exponentially tighter as it grips our hearts and minds.

This fateful revelation-of-the-method psychological warfare challenge was decreed in alchemical "Once and Future" time, as well as in "space" -- on the "Truth or Consequences" 33rd degree of north parallel latitude.

In the occult physics of a ruling Cryptocracy which is "stepped in conspiracies” — "time relations among events are assumed to be first constituted by the specific physical relations obtaining between them.”

I am writing today because I read your essay "Operation Ouroboros."  Let me see if I understand this. We are being dared to act on the directional signal. The Regime is revealing its methods. Only some of us are aware to the best of our ability that this is what it does, it reveals itself. What this brings about to me is more freedom of thought and spirit. But this is indeed a lonely experience. One is a stranger in this place. Which of course takes a certain amount of perdurance and courage.


Aside from that personal admission, are you saying that for those who do not act, their hearts and minds will become tighter within the grip of the creature that devours its own tail perpetually and always? If so, then you are referring to most human beings from what I can observe. This is so esoteric they'll never get their brains around it.

So is the Regime Revealing its Method for the fun of it since most people don't get it at all? Or is there another reason that is to come that includes grip tightening?

For those who are paying attention, the Cryptocracy is increasing the psychological warfare pressure. In the case at hand the message is: we, the perpetrators, are going so far as to point you to the source for our own unmasking, and you will not bother to look at the evidence and then act to bring us to justice. Therefore, now we have you ever more under our criminal thumb.

A Boston Globe article gives the impression that this story is narrated nearly completely by the lawyer Jason Rosenberg. One interesting contribution from the suspect's alleged landlady, however: "Landlady Joanna Herlihy told The Associated Press she salvaged publications after authorities had searched the apartment and items were discarded."

Are we to believe that the establishment passed up an opportunity to villainize 'right wing extremists' and simply discarded 'right wing' materials found in a terror suspect's home? Moreover, the primary witness of these alleged materials seems to be saying they were found in the trash outside the suspect's home.

This has all the appearances of the gatekeepers of perpetual Purim conspiracy culture misdirecting away from their own problems and onto the targets of their hatred: the non-Judaic population of their actual homeland of the Caucasus region, Russians, Muslims, traditional conservatives, "right wing extremists," etc. What a horrific Amalek figure is created by all of those 'Jew-hating' forces ... conspiring together! Thank 'Hashem' for The ADL and 'Homeland Security!'

And where are the synchromystics on Tsarnaev allegedly being under the influence of alleged Tsar propaganda ("The Protocols"), and Tsarnaev's alleged initiation into this 'dark right wing' ideology taking place in Newton, MA? They can't hear the 'cosmic consciousness' speaking through that mouthpiece of the moneypower,The Wall St. Journal?

I am sure you are aware of the increasing popularity of your book, "Secret Societies and Psychological Warfare" on Amazon.

I believe that you should capitalize on this by returning to explore the epistemology you and James Shelby Downard defined.

Don't know if you've read Dave McGowan's research of the Boston Marathon bombings, but his photo analysis is outstanding - clearly shows this was a staged event. There was a human wall formed along the perimeter of the initial explosion, with various actors taking their places from assigned "scream queens" to "directors" as well as what look like civilians keeping onlookers at bay. All of the subsequent interviews from "survivors" and so- called doctors are shown to be completely false after examining the photos.

When they're not busy practicing alchemy on US citizens, they're off in foreign lands playing high-stakes games of Truth or Consequences.

Is it a coincidence that Palestine, Syria, Iran, and other politically significant Middle Eastern countries reside within the 33rd parallel north?

From 2007, this article on The New Yorker (another "reputable" mouthpiece of the Ministry of Truth) was a great example of Revelation of the Method:

Some of the more revealing quotes:

"...the Saudi government, with Washington’s approval, would provide funds and logistical aid to weaken the government of President Bashir Assad, of Syria. The Israelis believe that putting such pressure on the Assad government will make it more conciliatory and open to negotiations."

"The U.S. has also taken part in clandestine operations aimed at Iran and its ally Syria. A by-product of these activities has been the bolstering of Sunni extremist groups that espouse a militant vision of Islam and are hostile to America and sympathetic to Al Qaeda."

"...Bandar and other Saudis have assured the White House that "they will keep a very close eye on the religious fundamentalists. Their message to us was ‘We’ve created this movement, and we can control it.’ It’s not that we don’t want the Salafis to throw bombs; it’s who they throw them at—Hezbollah, Moqtada al-Sadr, Iran, and at the Syrians, if they continue to work with Hezbollah and Iran.”

Are you going to review or comment on S.K. Bain's book: The Most Dangerous Book in the World: 9/11 as Mass Ritual?

He gives you and your Secret Societies book a lot of credit in the book for his analytical framework.

I was not aware of the Bain book. Thank you for the alert. I will acquire it.