The Seduction of Judeo-"Christianity" by Orthodox Judaism

Truth Mission a Success in Sandpoint

From July 26-28 Christian revisionist historian Michael Hoffman brought his research on the curse of usury, and the seduction of Judeo-“Christianity” by Orthodox Judaism, to America’s Promise Bible Church in Sandpoint, Idaho. 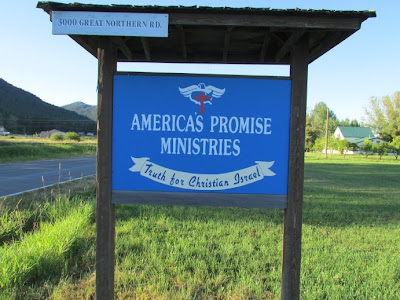 America’s Promise Ministries, located in the foothills of the Selkirk mountains, has survived media vilification, vandalism and death threats, to win the respect of the local community while serving as a bastion of Christian integrity in a sea of Judeo-Churchianity.

On July 26, from our office near Coeur d’Alene, we drove approximately sixty-five miles north to beautiful Sandpoint, Idaho for Pastor and Mrs. Dave Barley’s annual bible conference, amid the magnificent Selkirk mountains, just a few miles from pristine Lake Pend Oreille. Amid the tourists, fishermen, hikers and boaters in Sandpoint, we settled down on the outskirts of town with a group that at times numbered nearly 60 fellow truth seekers, for a weekend of biblical exploration, inquiry and amicable discussion and debate. 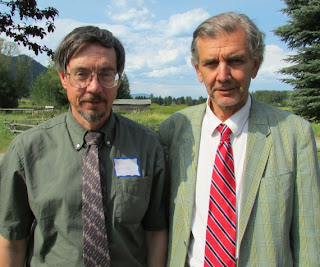 If you were not in attendance you missed not only the speeches, but the fellowship, solidarity and mutual support which was experienced by almost all present. The discussions and exchange of information continued over lunch, in the shade of trees on the grounds of the church and in the vestibule. We renewed acquaintance with old friends and met new ones, including patriot activist Jack Yoos of Sagle; Kimberly and her daughter Hanna from Sandpoint; and two of the Barley’s strapping sons, who were both knee-high to grasshoppers the last time we saw them. We were gratified by the arrival of folks from Montana (among whom were old friend Corey and his lovely children); Brian Wilson from Carson City, Nevada; Dennis and his wife, the parents of a large family in eastern Washington; Catholic scholar Justin, who drove the 90 miles from Spokane on two consecutive days - both Friday and Saturday - staying late in the evening; and others who came from California, Wyoming, Oregon and southern Idaho. 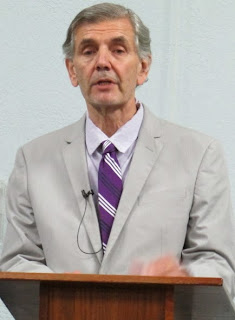 On Friday afternoon we spoke for nearly eighty minutes on usury and the rise of the Money Power, reviewing the Biblical, apostolic, patristic, conciliar and papal ban on all interest on loans of money, not just “excessive” interest. We dealt with objections of our opponents and corrected the historic record concerning the Renaissance Church of Rome’s initiation of this curse and the early Protestant resistance to it. After our talk, two gentlemen approached us to ask more questions and, as it turned out, to seek counsel. We were impressed by their sincerity. Both men had loans out at “moderate” interest. At the end of our luncheon discussion, both revealed their intention to return the interest they had received on the loans! We were deeply moved, and pointed out to them, from the words of St. Basil, that by so doing, they would put the God of the universe under obligation — "answerable to them for payment.”

Saturday evening we were honored to deliver the conference’ keynote address. Our topic was "The Seduction of Judeo-‘Christianity' by Orthodox Judaism.” The goal of our lecture was to make it clear that there is no possibility of an alliance between Christianity and Judaism, even on issues such as family values or "faith initiatives," as deluded "Conservatives" imagine. Marshaling facts based on fifteen years of research, we demonstrated Orthodox Judaism's hidden side: child molestation, homosexuality, blasphemy against Jesus and Mary, Messiah-denial, deprecation of the Biblical patriarchs, including Moses; as well as magic and paganism. We endeavored to present a short course in what Judaism truly represents, with new insights suitable for veteran combatants in this crucial spiritual and ideological battle, as well as enlightenment for other church groups and your Protestant fundamentalist and Catholic neo-conservative friends, relatives and neighbors. Our Truth Mission is concerned first and foremost with conversion of the wayward and the confused, not simply preaching to the choir.

Our usury talk is slated to be released on DVD soon. In the meantime, our 'Seduction of Judeo-Christianity’ speech is available on DVD now. You can order it online here:
http://revisionisthistorystore.blogspot.com/2010/03/hoffmans-revisionist-history-store-dvds.html

We didn’t just teach at the America’s Promise Bible Conference, we learned as well, from interesting and challenging Scripture scholars and exegetes. When we disagreed, each of us managed to do so with good will and mutual respect.

Speaking as someone who is repeatedly banned from addressing Christian gatherings elsewhere, or advertising our books in  “conservative” magazines and websites, it was refreshing to be able to use the talents God has bestowed upon us, in person at a public gathering, rather than in the usual remote and disconnected medium of the Internet, or the U.S. Mail.

Our gratitude and hearty thanks go to Dave and Martha Barley for their hospitality and friendship, and in particular for inviting someone who is not a “clone" of their own particular religious and historical views. Nonetheless, they had sufficient intellectual curiosity and respect for a free exchange of ideas and information, to invite us anyway. If this could be said of other conference organizers and website and magazine publishers, we would have the opportunity to bring truth to many hundreds or even thousands of new people who, in our estimation, thirst for it mightily.
___________
Posted by Michael Hoffman at 7/30/2013 09:48:00 AM

Mr. Hoffman, I am very happy that this was a good gathering. I intend
to put the Postcard insert from my
copy of Usury in Christendom on the notice board at my local good foods store tomorrow. The notice board is well placed and well noticed. I am absorbed in this book. Thank you and I wish you every good in your good and fine efforts.