By Alexander McCaul
Professor of Hebrew and Rabbinic Literature at Kings College, London

With an introduction and bibliography by Michael Hoffman 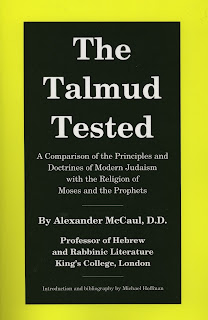 Partial list of Contents
Judaism’s perversion of Moses • Rabbinic injustice to women, slaves and gentiles • Rabbinic intolerance toward other nations •Hatred in the Talmud contrasted with charity in the Bible •Compulsory conversion of gentiles •Judaism’s ‘anti-semitic’ attitude toward fellow Jews regarded as am ha’aretz •Impoverished Jews whipped for accepting help from Christians •Converts to Christianity to be killed •Rabbinic contempt for sons of Noah • Intolerance of rabbinic prayers •Rabbinic lies and legends •Judaism a heathen religion: astrology, charms and amulets •Excommunication in Judaism •Synagogue system based on the oral law •Members of the Sanhedrin had to be skilled in magic •Polygamy •Divorce •Judaism’s oppression of the poor •Propaganda techniques and tricks of rabbinic deceit •Judaism as moral and intellectual slavery. •Rabbinic authority exalted above all others •Jews forbidden to love their gentile neighbors •Rabbinic permission to violate God’s commands •The rabbinic criminal code • The impenitent Jew at the tribunal of God’s judgment • and much more.

What is unique about this book?
Alexander McCaul reproduces on page after page of this volume, passages from the Babylonian Talmud and other sacred rabbinic texts in their original Hebrew and Aramaic, and then translates them into English, so there can be no question of misquoting, or “taking out of context.” The Talmud Tested offers incontestable documentary proof that Judaism leads it followers to mental and spiritual bondage in this world and eternal damnation in the next. Michael Hoffman writes: “This is the most convincing and comprehensive Christian textbook on Judaism since Eisenmenger, and it has the advantage of being in English, in clear, modern type. Open-minded persons who study it from cover to cover are unlikely to be deceived by the rabbis to any considerable degree ever again. Dr. McCaul’s phenomenal scholarship effectively inoculates his readers against the epidemic of Talmudic confusion engulfing our nation.”

A Personal Note from Michael Hoffman
"It has long been our objective to publish Alexander McCaul’s masterwork. He was the Victorian Eisenmenger (though he sometimes disparaged his German predecessor for the often caustic and satirical tone Dr. Eisenmenger adopted; Prof. McCaul was sensitive in how he approached potential Judaic converts). What is best about the McCaul book, besides being in English, are the numerous Hebrew citations printed on many pages and then translated into English, which he uses to convict the rabbis, by their own words, of deceit, guile, malice, idolatry etc. This edition of The Talmud Tested  from Independent History and Research represents the clearest and most readable McCaul facsimile on the market, and it is supplemented by the new introduction, wherein readers learn of the extent to which “Jews” were considered the natural object of missionary zeal, when Christianity was still worthy of the name. If thousands of copies of this book were to be circulated among Christian leaders and open-minded persons of good will, we could see something wonderful develop."

Sample from the book: 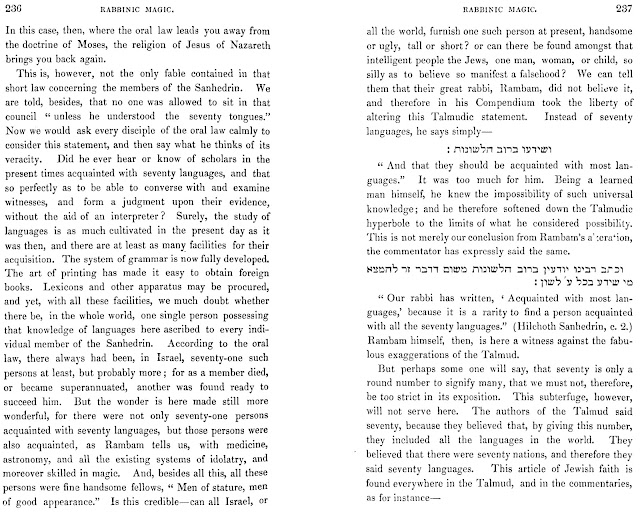 Help to publicize this monumental exposé: download, print out and distribute our advertising flyer